London: Arsenal had centre-back Gabriel sent off in a 1-1 home draw with Southampton in the Premier League on Wednesday, stretching their winless run to six games and piling more pressure on their manager Mikel Arteta.

Although defender Rob Holding nearly snatched a stoppage-time winner for Arsenal when he headed against the crossbar, it was another tepid performance by the Gunners who were on the back foot throughout. 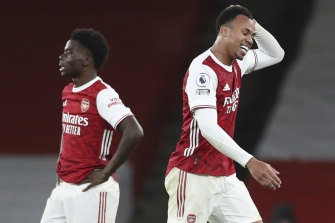 Gabriel, right, leaves the Emirates Stadium turf after being sent off for a foul on Southampton’s Theo Walcott.Credit:Reuters

The result left Arsenal, who had lost their previous four home games, in 15th place on 14 points from 13 games while Southampton moved up one place to third on 24 points.

The Saints had the chance to go top of the Premier League for the second time this season, albeit temporarily, as did Leicester City who fell 2-0 to Everton at home.

Southampton took the initiative from the off and Arsenal keeper Bernd Leno was forced to make a save in the 15th minute when he parried a swerving James Ward-Prowse free kick.

He was powerless three minutes later, however, as Theo Walcott scored against his former club to put the Saints ahead with a dinked finish after Che Adams released him through the middle with a defence-splitting pass. 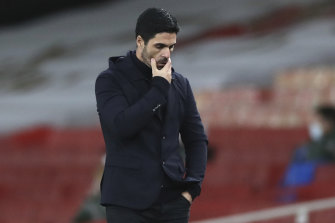 The result continued the pressure on Arsenal boss Mikel Arteta despite the Gunners ending their losing run at home.Credit:Reuters

Nicolas Pepe and Bukhayo Saka went close for Arsenal before Pierre-Emerick Aubameyang levelled in the 52nd minute with a clinical finish into the bottom left corner after good work by Saka and Eddie Nketiah.

It seemed Arsenal had gained some momentum but they were pegged back again after Gabriel was sent off for a second bookable foul when he hauled down Walcott in the 62nd minute.

Substitute Nathan Redmond hit the woodwork from close range for Southampton and Arsenal were forced to defend desperately in the closing stages as the visitors pressed forward.

Holding then nearly stunned the Saints as he met an inviting cross from the left with a header that left keeper Alex McCarthy rooted to the line as it rattled the crossbar.

In Wednesday's other match, Leeds United conceded the first goal but scored three in an 11-minute spell late on at Elland Road to beat Newcastle 5-2.