Arsenal were forced to spend an extra night in Norway after their flight back to London was cancelled due to heavy fog following their Europa League win over Molde.

The team were due to return to London after beating beat Molde 3-0 on Thursday night but had to adapt their travel plans after their plane was not guaranteed a landing spot in London because of heavy fog.

Mikel Arteta’s side risked being diverted to the Midlands or Amsterdam airport so the Gunners opted to spend an extra night in their hotel and rearranged a new flight to London on Friday morning.

The change of plans is understood not to have had a negative impact on their plans and they are expected to train as normal ahead of facing Wolves on Sunday, live on Sky Sports. 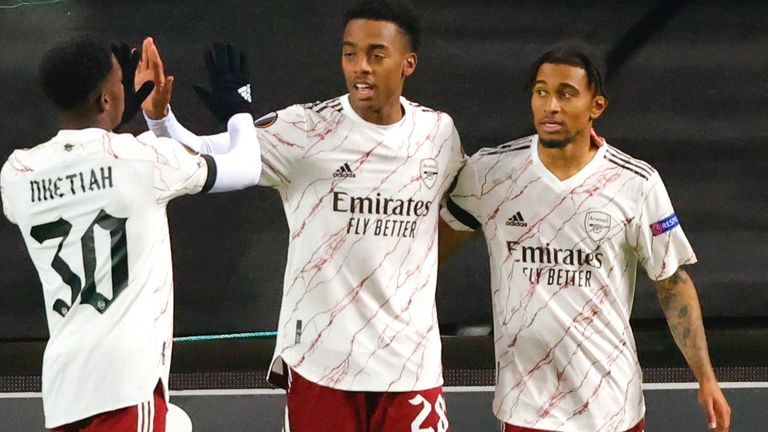 Arsenal qualified for the knockout stages of the Europa League by beating Molde with Nicolas Pepe, Reiss Nelson and Folarin Balogun all on the scoresheet.

The result means Arsenal are through to the round of 32 and can assure themselves top spot in Group B with a positive result at home to Rapid Vienna next week – a game which will see 2,000 supporters return to the Emirates Stadium for the first time in nine months.

This week on the Pitch to Post Preview Podcast, Peter Smith is joined by Michael Bridge and Charlotte Marsh to look ahead to a blockbuster London derby between title hopefuls Chelsea and Tottenham. James Cooper explains how Bruno Fernandes has become Man Utd’s leader, and we analyse Arsenal’s creativity problems.

Plus, Tim Thornton has the latest from Leeds and Sheffield United – including the story of how the Blades almost signed Diego Maradona! Charlotte then makes her bold Pitch for what she thinks will happen in this weekend’s Premier League action…