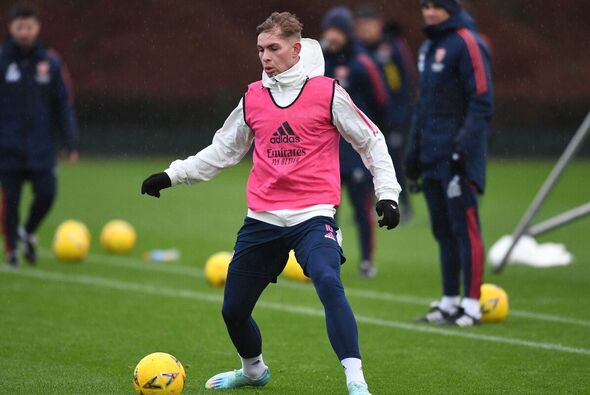 Emile Smith Rowe has revealed that he has been playing on with an injury problem for up to four years. It is only now after his groin operation in September that he is finally able to get through games pain free and aims to use that boost to help fire Arsenal to their first title for 19 years.

The 22-year-old came on for the final 15 minutes of Monday night’s 3-0 FA Cup win at Oxford United – his first action for four frustrating months. He is now holding out hope of playing some part in Sunday’s north London derby against Tottenham.

And he is in a very different place to the one in which he found himself when he first noticed the problem while on loan at Leipzig in Germany in the early part of 2019. “It’s great to be back on the pitch with my team-mates – I am just going to kick on from here,” Smith Rowe said.

“A lot of people might not know, but I have had this injury since I was 18 or 19. It has been quite hard to deal with it over the years.

“But I am really happy that it is just finally over. I had a successful surgery and I am really feeling really good. It was the exact same pain from back when I was at Leipzig, which has been quite hard to manage.

“Obviously a lot of people might not know about that from over the years. But I am just happy to come out the other side fully fit. It has been difficult being out for this long. I don’t think I have had this long a lay-off before.

“It was really tough, but the whole team was around me. The manager really helped me and obviously I had my family back home supporting me. I managed to get through it and I am just happy I’m fully fit now.

“And yes, it has been tough watching the boys, but at the same time we are top of the league and playing really well, so I can’t complain. I have been itching to get out there and play with the boys. I hope I can make an impact. I hope we can have a great rest of the season.”

One thing gone forever, though, is the chance to have played in last year’s World Cup. Smith Rowe’s three caps had made him an outside contender for a place on the plane before the need for an operation overtook him.

“Obviously you always want to play for your country,” he said. “But at the same time, I had to do what is right for my body.

“I am still young, so I will keep working hard to get more opportunities for the national team. But right now, I just need to focus on Arsenal and getting some more minutes.”

Henry fires warning to struggling Chelsea star: 'You have to show something'