In the end they showed admirable grit to salvage a point in a rollercoaster affair, that they may have even won. But even by Arsenal’s embarrassing and calamitous standards, their first-half display at the London Stadium really was quite something. This was arguably the worst 45 minutes of action from any Premier League team this season.

The Gunners were heading into the break 3-0 down before Alexandre Lacazette’s snapshot deflected in off Tomas Soucek.

It was a goal that kept Arsenal alive and excused their dire defensive capitulation. Harsh words at the break were inevitable from Mikel Arteta in the away dressing room and his message clearly struck a chord.

The consolation gave Arsenal a springboard after the interval and the Gunners were a completely reformed side. It was like watching another team as they fought back to draw 3-3 and earn a point.

There was hunger, fight, creativity and desire all over the pitch but conceding three first-half goals was always going to prove a major hindrance and left Arsenal with a mountain to climb. 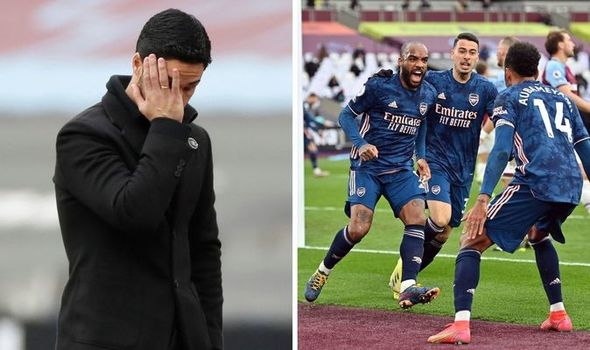 Their credible efforts second half completely the point. Arsenal cannot afford to be shipping three goals in the first place. Their defence remains riddled with insecurity.

Bernd Leno did himself no justice when letting Jarrod Bowen’s effort squeeze past him into the net for the second.

While there’s not much that could have been done about Jesse Lingard’s thunderous opener, there is little to no confidence in this leaky Arsenal backline as a whole.

Hector Bellerin has not been at the same level since suffering a serious knee injury in 2019 but he undoubtedly cares about the club.

He was left at home today and out of the squad, as Callum Chambers got the nod ahead of Cedric Soares.

Going forward, his crossing helped create two goals and although he barely put a foot wrong, he is not the long-term answer to Arsenal’s problems.

You had to look twice to process his inclusion and the players alongside him were hardly the most reassuring.

David Luiz and Pablo Mari are good back-up options at best. There is no way they should be starting together in the Premier League for Arsenal.

Besides Kieran Tierney, the Gunners defence is in need of a total revamp. It must be technical director Edu’s priority at the end of the season.

If Arsenal have aspirations of playing in the Champions League again, Luiz and Mari are not fit for purpose. Certainly as starters and the same applies for Chambers, despite his impressive showing.

Granted they are not first choice but even Arsenal’s options in reserve are nowhere near the likes of Manchester City, Liverpool, Manchester United or Chelsea. Even Leicester.

A new commanding centre-back to play alongside Gabriel Magalhaes must be top of the agenda.

There was talk of Dayot Upamecano and Ibrahima Konate and that’s where Arsenal should be shopping. 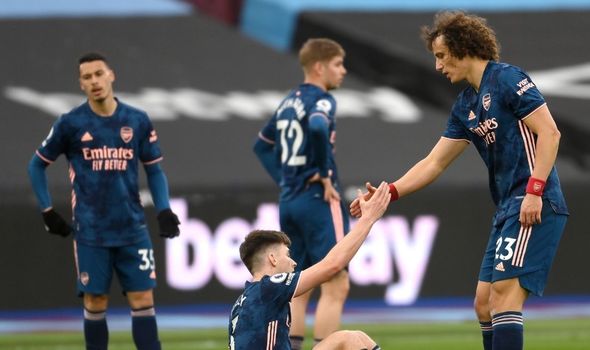 Cheap quick-fixes such as Luiz are only leaving Arsenal further behind the rest of the Big Six.

The club seem reluctant to spend big on their defence but are happy to continue shelling out staggering fees on attackers and midfielders.

The team is completely unbalanced and that was evident in east London, with West Ham’s attack a total mismatch for the Gunners defensively. Arsenal’s star quality in attack pulled them from the dirt.

Scoring three goals on the road should be enough to earn all three points but on this occasion, a draw was all they took away besides the realisation that their defence is in need of a serious overhaul this summer.

Zlatan Ibrahimovic ruled out of Euro 2020 due to knee injury