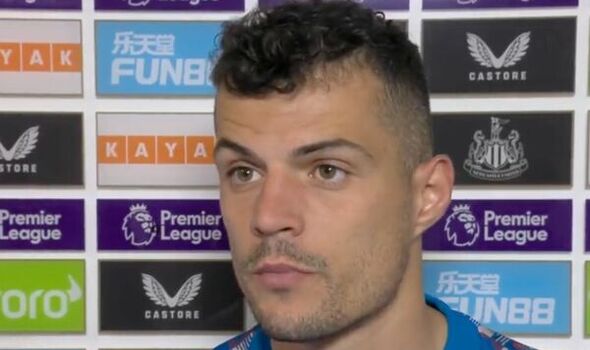 Arsenal midfielder Granit Xhaka launched a scathing attack on his teammates following the Gunners’ dismal 2-0 defeat to Newcastle on Monday. The result leaves Mikel Arteta’s side needing a miracle to qualify for the Champions League going into the final game of the season.

Arsenal would require a win against Everton and for Tottenham to lose to already-relegated Norwich. And Xhaka was left seething as he came off the field at St James’ Park.

“It’s difficult to find the right words,” he told Sky Sports. “From the first minute to the 90th we didn’t deserve to be on the pitch.

“I can’t explain to you why. We didn’t do what the game plan was, not listening to the coach. What happened was a disaster performance. You don’t deserve to play Champions League or even Europa League. It’s very hard to take it at the moment.

“I don’t know why we’re not doing what the coach is asking for us.” When asked if inexperience in the squad was an issue, Xhaka added: “If someone isn’t ready for this game, stay at home. It doesn’t matter your age. If you’re nervous, stay on the bench or stay at home. You need people to have the balls to come here and play.

“It’s one of the most important games for us. We’re feeling very disappointed for the people who came over here. Sorry to them [fans], I don’t have any other words. The dressing room is very quiet. The game plan was totally different to what we did over 90 minutes.

“We are waiting for six years. We had everything in our hands. We looked like we were in the position where Newcastle are and they were where we are.”

Arsenal were clearly stunned by the result, and their manager Mikel Arteta had no answers as to why his team were so poor. “Really difficult night to swallow,” he said. “Newcastle deserved to win, they were comfortable from the first minute to the last minute, we had nothing in the game.

“They were much better in every department, they were better in duels, second balls, they managed to do so, we were poor with the ball. We had nothing in the game.

“A lot of things happen during the night, substitutions through injury but it’s not an excuse. Newcastle deserved to win from the beginning, they were much better for what the match requires to be on top of that.