Katie McCabe sealed dream Arsenal move aged 20, a year later she was the Republic of Ireland’s captain… now she’s inspiring the next generation – including ‘football mad’ sister – as the women’s game takes the spotlight

Katie McCabe was playing in front of a packed Tottenham Hotspur Stadium almost a year ago. The first ‘Women’s Football Weekend’ saw Arsenal take on their north London rivals in front of 38,262 fans – a game the Gunners won 2-0.

While no supporters will be present for today’s showdown with Chelsea, there will be one keen observer over in Ireland – McCabe’s ‘football mad’ 12-year-old sister Lauren.

McCabe was made captain of the Republic of Ireland at the tender age of 21 and her younger sister has dreams of following in her footsteps by making it as a professional footballer. 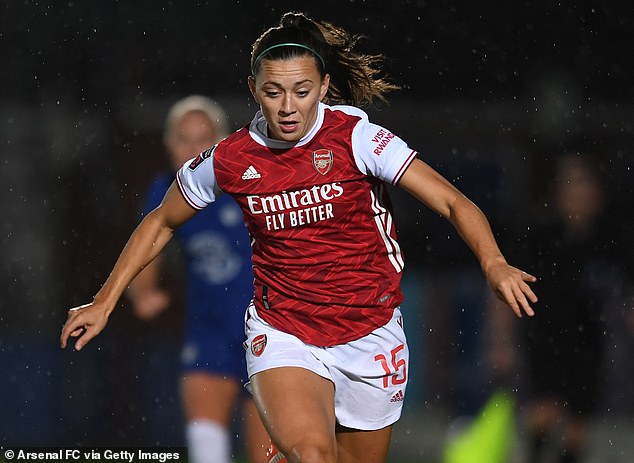 ‘She messages me now and again when she needs a new pair of boots,’ jokes McCabe.

‘She loves it, she’s always asking questions! She’s able to tell me when I’ve played badly as well!’

‘She’s definitely more attacking, she takes all the corners and scores goals for fun. But they’re at that age where they have to take turns in goal.

‘It’s fantastic that she can have the dream to aspire to be a professional footballer because that wasn’t quite as visible when I was young.’

When McCabe was growing up the coverage of women’s football was scarce but she recalls her dad getting her to watch the Women’s FA Cup final every year – the one women’s game that was broadcast on TV. Now, with the BBC, BT Sport and the FA Player App, fans can watch multiple WSL games every weekend. 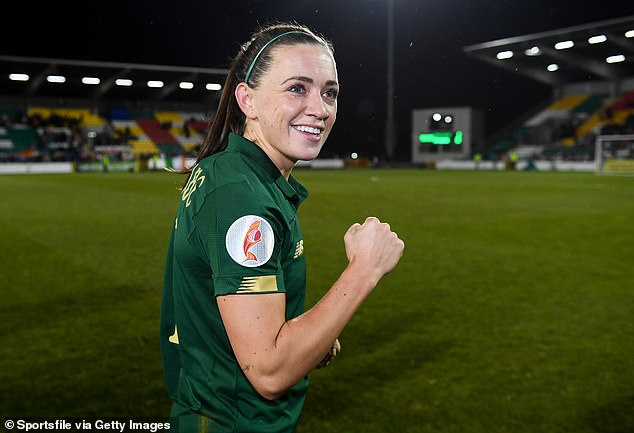 ‘If it wasn’t for him sticking those games on the TV I wouldn’t have been able to see it,’ she says.

‘Visibility now is so important, especially in the women’s game. There’s the campaign “If you can’t see it you can’t be it” and I 100 per cent agree – young girls need to see professional players playing at the highest level to aspire to be that as well.’

McCabe started her career with local team Raheny United and has fond memories of winning league titles and cups. ‘I was going training with a lot of senior women, people in their 30s. They took me under their wing – a “young brat” they called me! We still have a group chat to keep in contact.’

With the encouragement of fellow Irish internationals Emma Byrne and Niamh Fahey, both WSL players at the time, McCabe made the move to north London 2015, aged 20.

‘I didn’t think twice about it. I spoke to Emma and Niamh and Emma was like “you’re coming!”

‘I used to watch the girls pick up FA Cups so it was quite surreal, even to get the McCabe and No 15 on the back of the Arsenal jersey – something you dream of.’

With strong competition for places under manager Pedro Martinez Losa, McCabe joined Scottish side Glasgow City on loan for six months – a move she says was pivotal to her development.

‘It was a massive point in my career, I need to go away and get minutes and have that regular football week in week out. Glasgow City were so important to my development – I fell in love with football again, I fell off it a little bit prior to the loan move. I wasn’t enjoying it because you want to play.’

While McCabe was on her way back to London, Losa had departed with current boss Joe Montemurro appointed as his replacement.

The Irish international has become a regular under the Aussie, who had the foresight to convert her into an attacking full back. ‘Its taken a while to learn and understand the role however I relish new challenges, my aim is to be regarded as the best left back in the game.’ 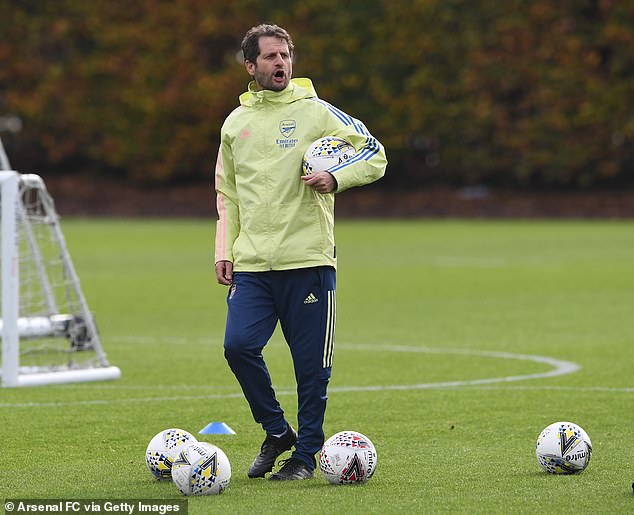 ‘I love playing under Joe,’ said McCabe. ‘He just instilled that belief in me again. You need that confidence as a player. He’s played me anywhere and everywhere, I’m a very versatile player now.’

Montemurro has developed a reputation as one of the league’s most laid back managers and his approach has brought the Gunners success winning the League and Continental Cup double in 2018.

‘Matchday he’s very relaxed, in and around the place he’s very calm – it’s his nature,’ McCabe says of her manager.

‘He’s not a shouter, he never has been. However in the same respect he has a presence and demands respect so the players know their role. He’s also a great football mind and someone I want to continue to learn from.’

Arsenal are looking to bounce back from their first defeat of the season when they host London rivals Chelsea today.

The Gunners were beaten 1-0 by Manchester United last weekend with the Red Devils going top of the table following the result. 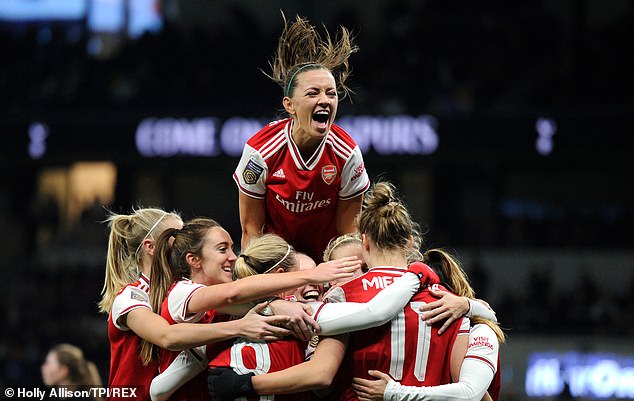 McCabe is relishing the chance to right the wrongs of that game when they take on Emma Hayes’ side, who are on a 26-game unbeaten run in the WSL.

‘We were really frustrated with the loss against United, I think Casey Stoney had them well set up. We played into their hands a lot of the time.

‘With Chelsea there is always that massive London rivalry – it’s what you want as a footballer. They’ve brought a few players in and strengthened their squad but we so have we.

‘It’s crazy that we can’t have fans there, there’s a massive weekend coming up for women’s football – we want the fans to be at the heart of it all as they usually are.’

A repeat of the free-kick like the one McCabe scored against Tottenham last month would no doubt please her manager. The goal went viral – although McCabe had to dispel accusations it had in fact been a cross rather than a shot.

‘It was me and Beth (Mead) over it and I think the conversation was “I’ll cross it” and then Beth was like “no, no shoot!” so I said “okay right I’ll shoot.”

‘I’ve seen it be compared to Granit Xhaka’s free-kick against Crystal Palace, it was literally identical.’

‘You get the limelight for a few brief seconds then Viv takes over!’ McCabe jokes.

‘I was obviously happy to see her get the 50 goals, I think I assisted her with one or two in that game as well – we all wanted her to break that record.

‘She’s insane, her goalscoring record is a joke. What she can do off the ball as well, she’s so creative and she’s one of the most humble people I’ve ever met given what she’s achieved at such a young age.’

McCabe and her team-mates will hope the striker is back on the scoresheet at Boreham Wood this afternoon. 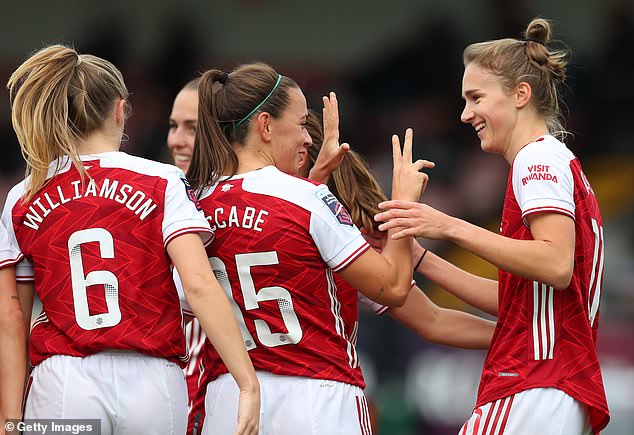