Mikel Arteta concedes Arsenal ‘didn’t deserve more than a point’ in draw at Brighton as Graham Potter hails his side’s ‘fantastic performance’, despite failing to make their dominance count

Arsenal boss Mikel Arteta was content to escape Brighton with a goalless draw following a lacklustre display from his resurgent side at a rain-soaked Amex Stadium.

High-flying hosts Albion edged a dull Premier League encounter as the Gunners’ three-match winning run was brought to an end.

Pierre-Emerick Aubameyang headed against the outside of a post for the visitors in the first half but chances were at a premium, with just two attempts on target at each end. 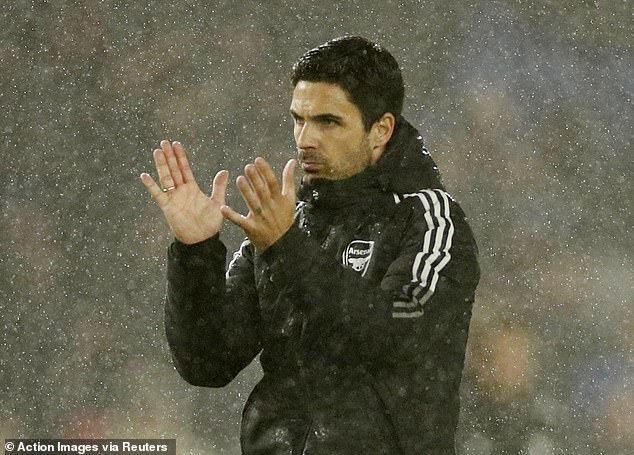 ‘I think it was a point gained because I don’t think we deserved anything more than that,’ said Arteta, whose team arrived on the south coast buoyed by last weekend’s north London derby win over Tottenham.

‘We did deserve the point because we defended really well the last 15 or 20 metres of our pitch.

‘But in the end we never felt in control of the game and we struggled to break their press and get a good sequence of passes and impose ourselves in the final third and they made it really tough for us.’

Victory for Brighton would have moved them level on points with leaders Chelsea.

The home side registered 21 shots in total but the vast majority were wayward, with Leandro Trossard, Dan Burn and Neal Maupay failing to capitalise on decent openings.

Arteta was pleased with his centre-back partnership of Gabriel Magalhaes and Ben White, who was back in Sussex for the first time since his £50million summer transfer. 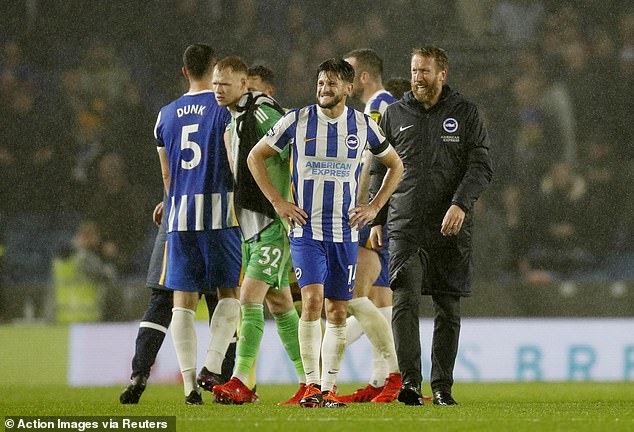 Brighton failed to make their dominance count, missing a host of chances at the Amex Stadium

‘They never played together, Gabby is still struggling with the language, and they didn’t have any time to work together in pre-season,’ said the Spaniard.

‘They gained a really good connection, good chemistry, and I think their qualities match and complement each other really, really well and both of them were terrific.’

Brighton sit fifth with 14 points from seven games following the stalemate, with Arsenal four places and as many points further back.

But, despite dominating the game, it was a familiar tale as the Seagulls failed to make their chances count.

Manager Graham Potter told Sky Sports: ‘It is what it is with the result, but the performance was fantastic from us.

‘I loved our courage, our quality. It was a wonderful performance and I am really proud of the players.’

He added: ‘As a coach you know that the hard bit is putting the ball in the net but we tried everything.

‘The intensity was great, playing out from the back and going into a high press. Going man for man with their high quality players, it was a fantastic performance.’