Atletico Madrid are “scared” goalkeeper Jan Oblak will want to join Chelsea this summer, according to Spanish football expert Guillem Balague. Oblak has been linked with a move to Stamford Bridge in a potential swap deal with the Blues stopper Kepa Arrizabalaga. Chelsea boss Frank Lampard is not a big fan of Kepa and wants to sign a replacement for the Spain international.

Balague says Atletico are yet to receive an offer from Chelsea and are planning to have the goalkeeper at the club for the upcoming season.

However, the La Liga side are worried what Oblak’s intentions would be if an offer did come.

“Atletico Madrid are scared that Oblak will listen to that proposition, to that offer, which could arrive if Chelsea feel that Oblak will be willing to leave,” Balague said on his YouTube channel. 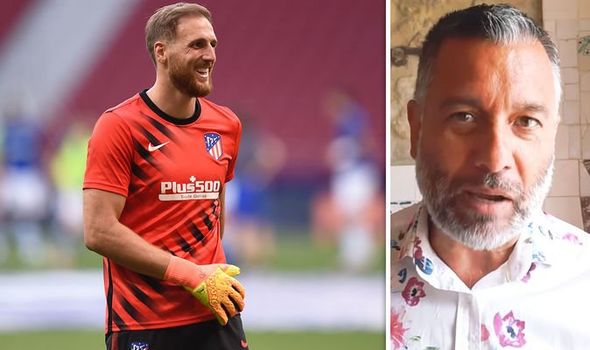 “Because the buyout clause is so high, and you’re talking about the most expensive goalkeeper in history, and that’s something that Chelsea will have to obviously try to reduce for Kepa to go the other way.

“Right now, from Atletico Madrid they’re saying and [Diego] Simeone is saying that everything starts with Oblak, that he needs to stay.

“And my understanding is that right now at this stage there has been no offer from Chelsea at all. So we’ll have to keep an eye on it.”

Meanwhile, Chelsea are closing in on the signing of Leicester City left-back Ben Chilwell.

Chilwell is set to cost an initial £50million which is the going rate according to European football expert Julien Laurens.

“I think that’s the price of the market,” Laurens told ESPN FC.

“If you look at the price of Walker, for example, or Benjamin Mendy, Aaron Wan-Bissaka… this is the price for those sorts of full-backs.

“Leicester were in a strong position because they knew Chelsea were really after a left-back, and from very early on Lampard targeted Ben Chilwell.

“I think he ticks all the boxes for what Lampard wants from a left-back.

“It was always a deal that was going to be done, provided Chelsea weren’t going to be too greedy with their asking price.”