Match report as Austria battle past North Macedonia to secure a 3-1 victory in the opening game in group C in Bucharest; Netherlands take on Ukraine in the second game in the group later on Sunday. 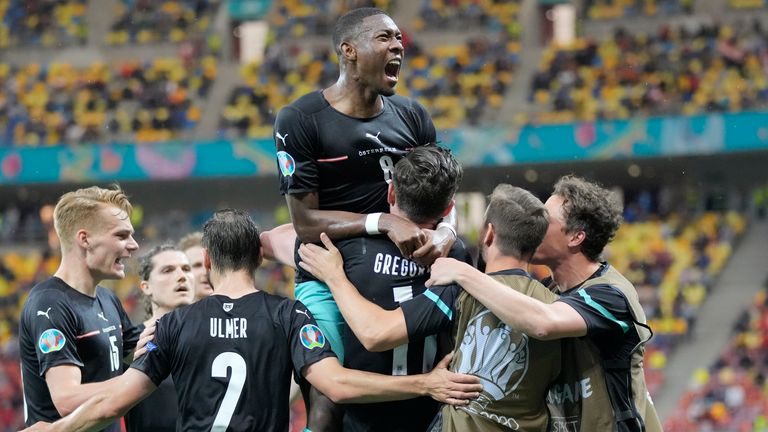 Austria opened their Euro 2020 campaign with a hard-fought 3-1 victory over North Macedonia in Bucharest.

Franco Foda’s side were sent on their way by a brilliant finish from Stefan Lainer (18), who volleyed home Marcel Sabitzer’s superb cross.

However, a comedy of errors in the Austrian defence allowed North Macedonia, who were playing in their first match at a major tournament, back in before the break. Veteran striker Goran Pandev (28) capitalised on the mix-up and produced a historic moment to bring his side level.

After the break, North Macedonia had their moments as Daniel Bachmann denied Boban Nikolov, but they eventually began to tire, and substitute Michael Gregoritsch (78) converted David Alaba’s cross to break North Macedonian hearts before former West Ham forward Marko Arnautovic (89) – another substitute – struck late on to round off proceedings.

Victory sees Austria take an early lead in Group C ahead of the second game in the group between Netherlands and Ukraine, which takes place on Sunday evening.

How Austria got their campaign up and running…

It was a huge occasion for North Macedonia, who were playing in their first game at a major tournament and it felt like a home game for them in Bucharest as choruses of boos rang out to greet early Austria possession.

However, those fans were quietened down in the 18th minute when Lainer produced a moment of magic to put Austria ahead. He was picked out at the far post by Sabitzer’s cross-field pass and his acrobatic volley beat goalkeeper Stole Dimitrievski from a tight angle. 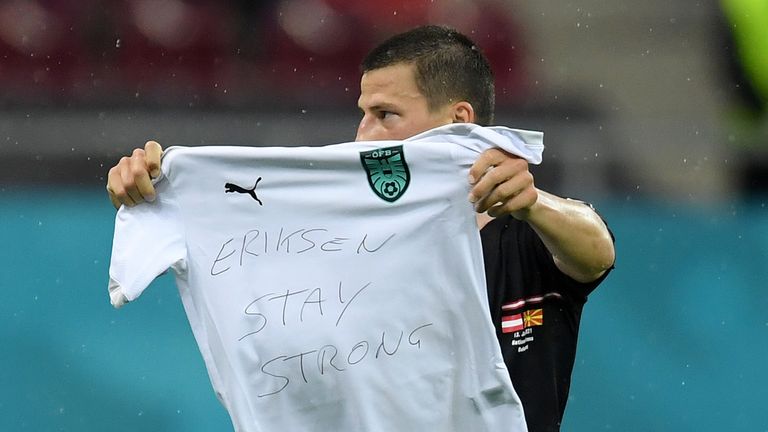 The lead didn’t last long, though, as Pandev pounced on a comedy of errors in the Austria defence.

Martin Hinteregger’s clearance hit Sabitzer and the ball rebounded towards Aleksandar Trajkovski. Daniel Bachmann raced out to win the ball, but he also made a complete mess of the save and the ball fell kindly for Pandev, who had a simple finish to net North Macedonia’s first goal in a major tournament. Just before the hour mark, Austria brought on Gregoritsch and Arnautovic to replace Felix Baumgartner and Sasa Kalajdzic, and Gregoritsch almost made an instant impact, but his deft header was superbly palmed away by Dimitrievski.

North Macedonia began to tire but they did create an opening as Nikolo forced Bachmann into a smart block. In the end, though, it was not to be for the tournament’s lowest-ranked team.

Gregoritsch prodded home David Alaba’s cross in the 78th minute before Arnautovic struck in the 89th as Austria earned a first win at the Euros at their seventh attempt and their first victory at a major tournament since the 1990 World Cup.

Man of the match – David Alaba It wasn’t the easiest of nights for Austria as they were forced to work extremely hard to seal their first Euros victory against North Macedonia.

Alaba will certainly have easier games, but the Austria captain was always looking for the ball and got his side moving as they eventually broke down a tiring North Macedonia.

It was his inch-prefect cross that set up Gregoritsch for Austria’s second which proved crucial in securing all three points. Both teams are back in action on Thursday with North Macedonia facing Ukraine in Bucharest (kick-off 2pm) and Austria playing Netherlands in Amsterdam (kick-off 8pm).