Gibson doubts Messi would want to leave Barca, despite reports earlier this week to the contrary.

However, he does not think the arrival of Koeman will be enough to keep the 33-year-old happy.

Miralem Pjanic will join the club from Juventus for the start of next season, but Gibson believes more must be done in the transfer window.

“Even if [Messi] wanted to leave, which I think is doubtful, I don’t think he’d have any choice because I can’t see anybody that’s going to be able to afford him,” Gibson told talkSPORT. 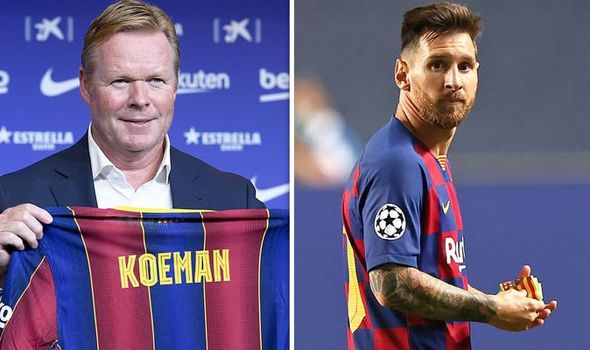 “Another new manager might be a point in the right direction. Messi knows that Koeman is a Barcelona legend.

“Will that be enough to keep him happy? I think new players is the only way you’re going to be able to keep Lionel Messi happy.”

Meanwhile, Barca president Josep Maria Bartomeu has insisted Messi wants to stay at the Nou Camp for the remainder of his playing days.

Bartomeu also says Koeman sees Messi as a key part of his squad going into next season.

“Koeman is saying that the pillar of his project is Leo Messi.

“He has a contract until 2021. I talk to him regularly and he knows there’s a project with a new coach here. We’re all disappointed at the moment, but we’re motivated by the new project.

“His father told me that there was a strong disappointment. This is correct, but since Sunday we have to think about the future. It’s about changing the mentality.”