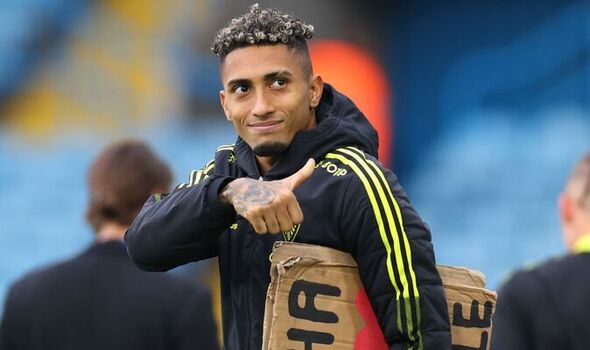 Barcelona sporting director Mateu Alemany is set to fly to Leeds this week for talks over a transfer deal for Raphinha as he looks to haggle a cheaper price for the winger, according to reports from Spain. The Catalonian giants are refusing to give up on the 25-year-old, who has been identified as one of their top targets this summer.

But so far, Barcelona have struggled to strike a deal with Leeds and that looks set to continue unless they’re willing to match the club’s £55million valuation.

Barcelona were quietly hoping Leeds would fail to beat the drop, as Raphinha had a £21m relegation clause written into his Elland Road contract.

That has now been scrapped though, meaning any club interested in signing Raphinha will have to pay up.

According to SPORT, Alemany is set to arrive in England next week for talks with Leeds and his mission is to entice them into lowering their asking price.

That seems unlikely though as Leeds believe they hold all the cards after securing safety on the final day of the season with victory against Brentford.

Their hopes of holding onto their star man have also been boosted by comments made by Raphinha while away on international duty.

Given that competition is fierce in attack for the Selecao, Raphinha is currently prioritising maximising his chances of making Brazil’s squad for the World Cup.

“If I said it doesn’t matter, I’d be lying, especially knowing that there are less than six months to go until the World Cup,” Raphinha said.

“I have to be active at the club where I am, this weighs on my decision, but I am confident in my potential.

“If it is to continue at Leeds or to leave, I am going to give my best, find my space and I am going to try be well for the World Cup.”

Raphinha is represented by former Barcelona and Chelsea attacking midfielder Deco, who is looking to do his former club a favour by brokering a deal.

An agreement between Barcelona and Raphinha is believed to have been struck in February but talks between the clubs have struggled to get off the ground.

Yet despite admitting game time is his priority, Raphinha has refused to rule out movement in the coming weeks and months

“On Monday there is the match against Japan and afterwards I will go on vacation,” he added.

“I have a contract with Leeds until 2024 and my future is in the hands of Deco, who is my agent, and in those of Leeds.

“I am now focused on the Selecao in this last game of the season and also on my vacation because we all need to rest. I have a valid contract and these issues are resolved by my representative, when something is closed, he informs me.”

Neville: Lampard should be 'LEAST surprised' over his Chelsea sacking