Barcelona president Joan Laporta has reportedly made it his personal mission to sign Erling Haaland this summer – because it may even convince star man Lionel Messi to stay. Barca are braced for a huge transfer window in what could prove to be a decisive period in their history as they battle to keep their greatest-ever player.

As things stand, Messi looks set to move on at the end of the season on a free transfer with Manchester City and Paris Saint-Germain among potential destinations.

Talks over a new deal are yet to progress but the appointment of Laporta as president gives Barcelona renewed hope.

Last year the Argentine was left angered by the club’s treatment of close friend Luis Suarez, who was told he was free to leave at the end of last season.

Barcelona have failed to replace the Uruguayan, who has come back to haunt them and could fire Atletico Madrid to the La Liga title. 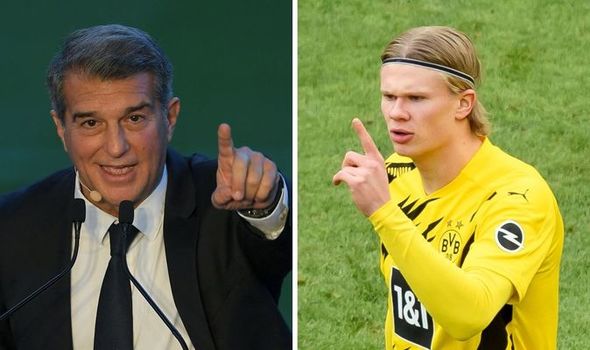 Now the Catalan giants are finally planning to bring in a new striker in the form of Borussia Dortmund frontman Haaland.

According to Spanish outlet Sport, Laporta is now working to pull off what would be considered ‘a miracle signing’.

The chief and manager Ronald Koeman are both in agreement that the club are missing a top-level striker.

But Barcelona know they would have to raise over £100million to have a chance of landing Haaland.

The report adds that Laporta is ready to sell both Philippe Coutinho and Antoine Griezmann to try and make it happen.

Both were signed for mammoth fees but have failed to take Barcelona to new heights.

Laporta has already been in contact with Haaland’s agent Mino Raiola, to express his interest in the Norwegian.

Problematically for Barca, they are not the only club in the running for Haaland with the race now hotting up. 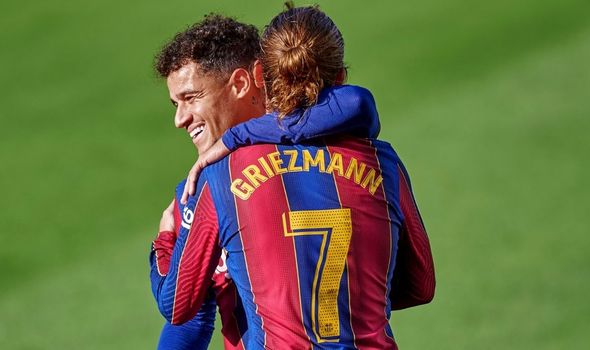 Manchester City, Manchester United and Chelsea are also believed to be in the running for Haaland.

The three Premier League clubs look set to do battle with Real Madrid and Barcelona but Dortmund hold all the cards when it comes to selling their star man.

That’s because his £64million release clause does not become active until 2022.

Therefore, Dortmund are entitled to demand way over £100m if they are to let him go with Donyell Malen and Youssef En-Nesyri among potential replacements.