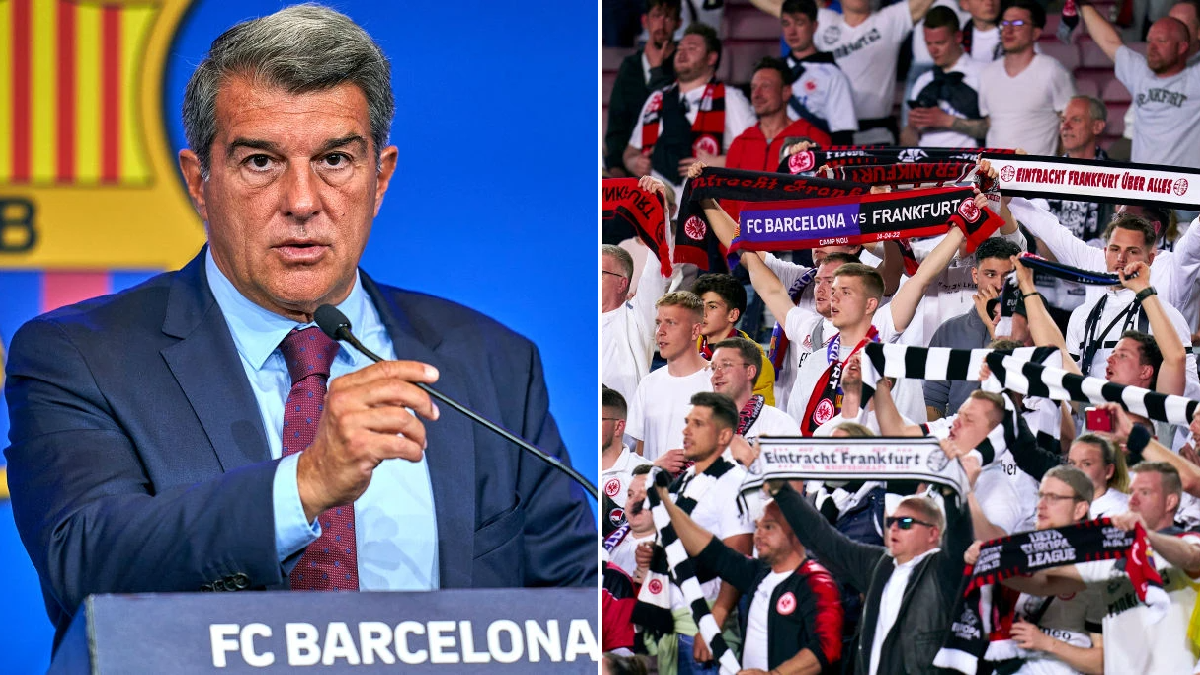 Barcelona president Joan Laporta has promised to ‘take action’ after thousands of extra Eintracht Frankfurt fans gained access to the Nou Camp for the Europa League quarter-final, admitting the situation left him ’embarrassed and ashamed’.

Barca were knocked out of the Europa League on Thursday night as Frankfurt secured a famous victory in Spain to set up a semi-final against Premier League club West Ham.

While Xavi’s Barcelona were held to a 1-1 draw in the first leg, they were still widely expected to go through at home on the back of a 15-match unbeaten run.

But Frankfurt won 3-2 at the Nou Camp in front of an estimated 30,000 fans who made the trip from Germany. As well as selling out their away allocation, thousands of Frankfurt fans could be seen celebrating in the home end.

Barcelona president Laporta said: ‘Frankly what happened makes me feel embarrassed and ashamed. There were many fans of the other team and not many of ours.

‘I’m very sorry for what has happened. What we can avoid are certain situations but as of now, we will have to be much more strict. We can’t allow these situations to happen so we will take action.’

Xavi, meanwhile, said the situation with the fans did not help his side as they crashed out of the Europa League.

‘[The presence of German fans] was a miscalculation and the club is reviewing it. It looked more like a final instead of a home game.

‘Frankly, I’m disappointed and so are the players. We needed an atmosphere and it was not there. We expected more fans to support us.’

He added: ‘The atmosphere in the stands did not help us, that is clear. It affected us and we were not well, this is not an excuse though because on the field we were not good enough either.’

Eintracht Frankfurt will face West Ham for a place in the Europa League final after David Moyes’ side beat Lyon 3-0 in their second leg to go through 4-1 on aggregate.

Speaking on BBC Radio 5 Live’s Football Daily podcast, he said: ‘That is a performance the whole of Europe will now be taking a look at.

‘It’s the type that puts you on the map. Players will want to come and join West Ham in the summer because it’s clearly a team that is building and progressing. That was a huge statement of intent.

‘They’ve got a different issue now. Up to this point it’s been all about enjoying the adventure and seeing how far they could go.

‘With Barcelona going out, suddenly the competition has opened up. It’s a serious trophy that they could actually win and potentially you could call them favourites.’

Referee and VAR suspended for not spotting Otamendi elbow on Raphinha