Home » Soccer » Barcelona were not planning to sign Pierre-Emerick Aubameyang

Few players have ever gone from being the biggest problem at one club to the most effective solution at another in such a short space of time.

Pierre Emerick Aubameyang’s metamorphosis from outcast at Arsenal to undisputed first-choice Barcelona centre-forward has helped transform the club’s season and his own standing among Europe’s top strikers.

Aubameyang scored the first and last goals in Barcelona’s 4-0 win over Real Madrid at the Santiago Bernabeu on Sunday night. 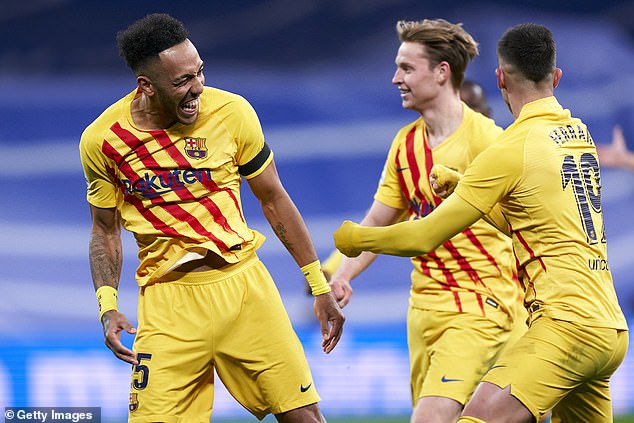 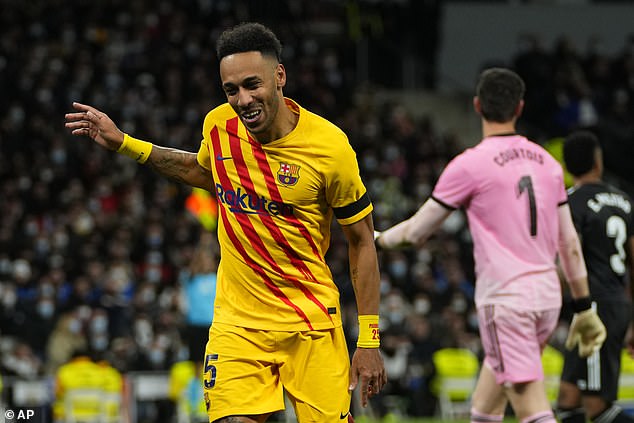 He could easily have scored a hat-trick; as it is his tally is now eight in 11 games for his new club.

As the Barcelona players bounced up and down in the dressing after the clasico singing: ‘Being at Barca is the best there is’, he was right at the centre of the celebrations with one arm around Eric Garcia and another around one of the club’s kit-men.

To say he has fitted in, adapting to life in another league, would be an understatement.

He has even taken the heat off the board’s need to throw financial caution to the wind and sign Erling Haaland. 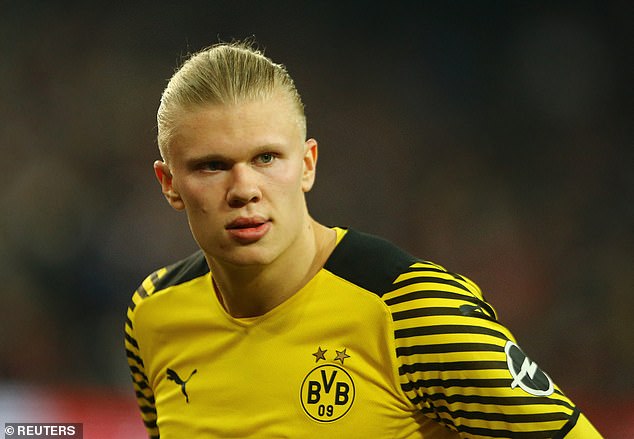 It’s all a far cry from the malaise of just a few months back when a lack of form, discipline and commitment cost him the captaincy at Arsenal.

‘We had a disciplinary issue. We have drawn the line. He’s on the bench,’ said Mikel Arteta before the north London derby last year.

Pictures of the player’s £2million chrome-wrapped LaFerrari stuck in London traffic suggested lateness had been the problem and it was not the only time he set the wrong example.

Last December the club waived a ban on players making trips abroad to give him special dispensation to visit his unwell mother in France under the condition that he returned the same day so as to train the following morning.

He breached that particular requirement arriving back the next day in time for training but not in the timeframe the club had requested, and with apparent breaches of covid protocol too.

He was left out of the squad for the next game and after meetings with manager Mikel Areta and technical director Edu it was made clear to him that he would have the captaincy taken away. 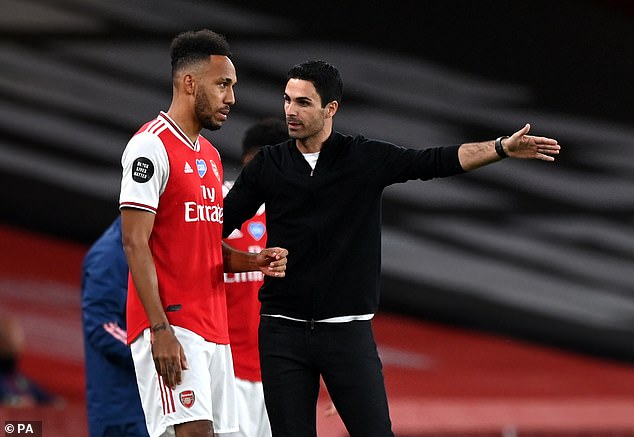 When Arsenal confirmed the decision in a statement, the phrase ‘following his latest disciplinary breach’ was damning and spoke of a loose cannon whose Arsenal career was only heading in one direction – out the door.

That the exit should lead to Barcelona surprised all parties. The club felt it had to back Arteta’s efforts to impose some non-negotiable rules on the squad even if it meant the example was set with a player he had previously enjoyed a good relationship with.

Arteta would not have counted on him scoring for fun in Spain as soon as he was gone.

Barcelona, meanwhile, were not planning to sign him. They had long been monitoring his situation but the priority going into the window was Spain forward Alvaro Morata. 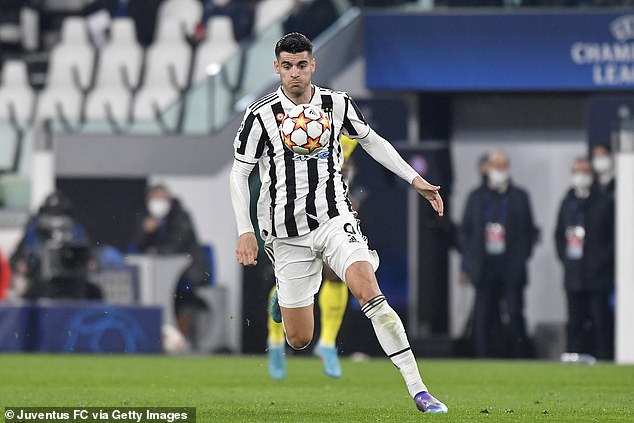 When Atletico Madrid – who still own the Juventus loanee – vetoed the idea of strengthening a La Liga rival, the Aubameyang deal was back on the table.

The player himself couldn’t believe his good fortune. It was just short of midnight on deadline day when, having terminated his contract with Arsenal, he signed with Barcelona.

They were able to register him with the league on February 2 because he was a free-agent.

And they were able to pay him because he had taken a sizeable pay cut – for this season at least he will earn a third of the £300,000 he was on at Arsenal.

That financial sacrifice laid the foundation for things to go well for him at Barcelona. There was lots of goodwill to make it work.

And there were also assurances, via third parties, from Arteta to Xavi that for all that he had fallen short of what was needed to be a good Arsenal captain he was a good person. 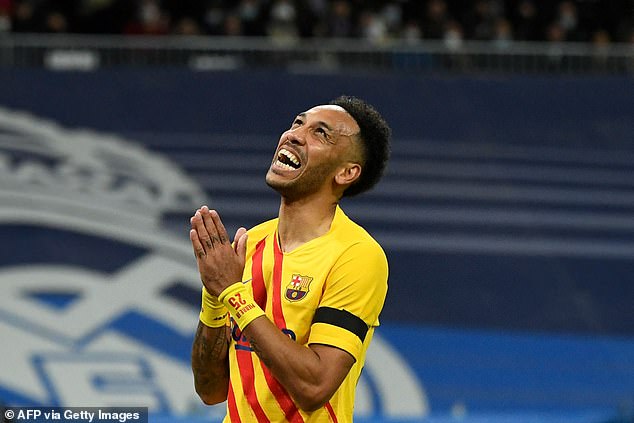 There were good references from Guim Laporta too. The president’s son knew Aubameyang from a football development project he had been part of in Gabon.

In wider football circles it was recognized that Aubameyang’s Ferrari might not always be in the right place ten minutes before training is about to start, but his heart was.

Thomas Tuchel had previously admitted to enjoying coaching Aubameyang at Dortmund albeit while needing to tell him to be out on the training pitch at 10.45 if the session started at 11 so as to get around his apparently incurable lateness.

It’s an old Dortmund connection that has helped him thrive at Barcelona. Ousmane Dembele was a good friend when the pair played together in the Bundesliga as well as on the same wavelength on the pitch.

The two have played together as if they have never been apart. 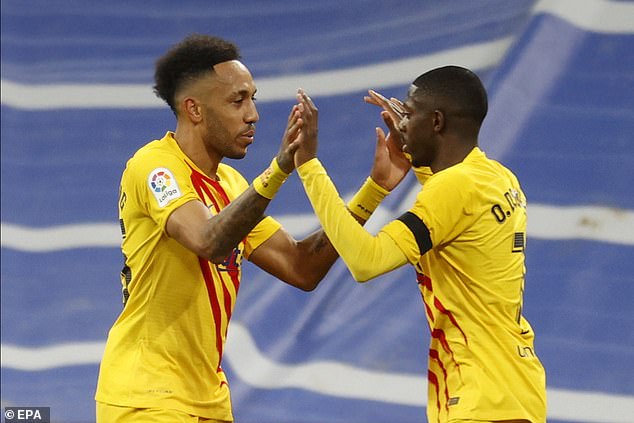 On Sunday night it was Dembele’s cross which Aubameyang headed past Thibaut Courtois.

Aubameyang has also began trying to persuade Dembele to sign a new contract so they can continue their partnership into next season.

Aubameyang’s position on the pitch has helped too. From the moment the club approached him about joining, they made it clear to him that they wanted him as a centre-forward.

During a couple of games so far he has spent very brief spells in matches playing wide left while Ferran Torres occupied the central channel but for the most part he has played as a nine. 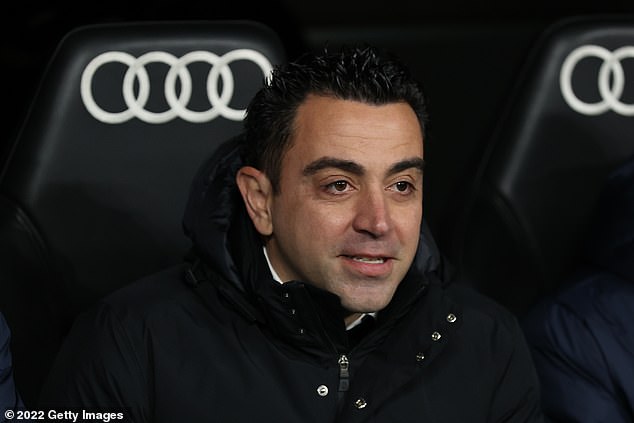 That is where Xavi wants him and it’s where he will operate into next season if, as seems likely, Barcelona do not buy Erling Haaland.

With that willingness to use him where he feels he best operates; an acceptance that while he may not be captain material he will more than carry his weight on the pitch; and that chemistry with Dembele; the 32-year-old is transformed.

How long it lasts remains to be seen but Barcelona are just delighted the gamble they took is paying off – when he turned up they were drifting, unable to take their chances, now they have a prolific finisher, they are Europa League favourites and heading for second in La Liga behind a Madrid side they have just thrashed 4-0.

Marcelo Bielsa insists his Leeds side are NOT a 'violent team'