Report and highlights from the Sky Bet Championship clash between Barnsley and Brentford at Oakwell as Ivan Toney scored the only game of the game to fire Thomas Frank’s side to victory on Tuesday night.

A goal from in-form striker Ivan Toney gave Brentford a 1-0 victory at Barnsley and extended their unbeaten run to six Championship games.

Toney was largely kept quiet throughout the 90 minutes but his effort midway through the second half – his 11th in as many league outings – proved decisive.

The victory was Brentford’s first in four outings and moved them within two points of the play-off places.

It was a fair result as the visitors created most of the openings, keeping Barnsley at bay. 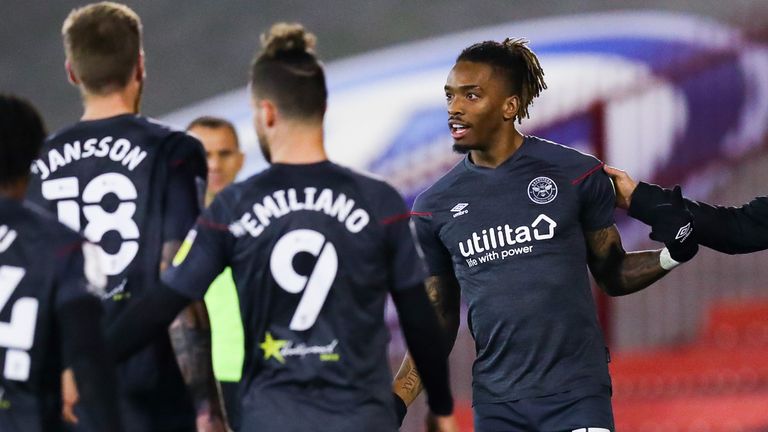 Tariqe Fosu, one of three players recalled to the starting line-up by Brentford boss Thomas Frank, had an early shot saved by Jack Walton.

Rico Henry then went close for the visitors with a low shot which went narrowly wide of the goal.

At the other end, Barnsley’s Matty James fired over and Alex Mowatt tested David Raya with an effort which was parried by the goalkeeper.

Frank made a change for the start of the second half, sending on Emiliano Marcondes in place of Jay Dasilva, and his side continued to create chances.

Bryan Mbeumo went close with a long-range effort which only just cleared the crossbar and Pontus Jansson directed his header on target following a corner, but it was straight at Walton who gathered comfortably.

The goal finally came in the 66th minute. Mathias Jensen delivered a corner and former Newcastle striker Toney met it with a glancing header that found the net.

Marcondes set up Mbeumo who shot wide from the right-hand side of the area as the visitors threatened a second.

Barnsley boss Valerien Ismael made a triple substitution in the 71st minute as he tried to inject life into his side’s display, with Victor Adeboyejo, Herbie Kane and Clarke Oduor all brought on.

But Brentford still poured forward and Walton had to catch a deep cross from Henrik Dalsgaard as Fosu waited to pounce before Bees substitute Sergi Canos just failed to get on the end of a long ball forward.

The Barnsley players and management made a strong appeal for a penalty when Vitaly Janelt appeared to handle the ball inside the area, but referee Darren Bond was unmoved.

Canos put fellow substitute Marcus Forss through on goal in stoppage time but Walton was alert to the danger and made a vital save to deny him.

Barnsley, who started the game on a run of four league wins out of five under Ismael, never seriously threatened to draw level.

Barnsley’s Valerien Ismael: “I am very happy about the performance. I saw a strong Barnsley today against a strong Brentford. It was, like we expected, very strong opponents and we saw the quality from them. We did well in the game. In the end, we had to get the penalty and this is the most frustrating thing for this game. You have to accept this decision.

“We fight to the end and it’s a good process for my team to see what you need to beat this opponent. This is the Championship and you have to adapt. It was a complete team and I am very delighted about the performance.”

Brentford’s Thomas Frank: “It was a very good win and I was very pleased with the performance. I think we looked very solid, structured and mature in more or less everything we did. I loved the patience in the first half because Barnsley are a very good side and I’m very impressed with them. I think they have made it unbelievably difficult for a lot of teams and they did that again today.

“They press with an extreme intensity and I think we managed that very well. We gave zero chances away. We need to score more set-piece goals and we looked dangerous today at set-pieces.”

Football’s most obscure excuses for missing matches including burning nipple