Barnsley’s Alex Mowatt has been named the Sky Bet Championship Player of the Month for March.

The captain’s left foot has been a wand for Barnsley during their superb springtime run. An unstoppable free-kick at QPR was the highlight, but five other goals came from his deliveries into the box at dead balls and in open play.

Barnsley manager Valerien Ismael said: “A big congratulations to Alex, it’s a great reward for him and also for the team.

“Alex is a big personality at the club and this recognition displays his consistency at this high level.

“He brings big performances, it’s the right choice and he fully deserves to be Sky Bet Championship Player of the Month.”

Mowatt said: “The amount of games we’ve won in March and the fact that I was regularly contributing and scoring goals all help, but it’s certainly a team award and a reward for our recent efforts.

“To get this award playing as a midfielder is decent, but I want to kick on and keep scoring and creating chances right up until the end of the season.” 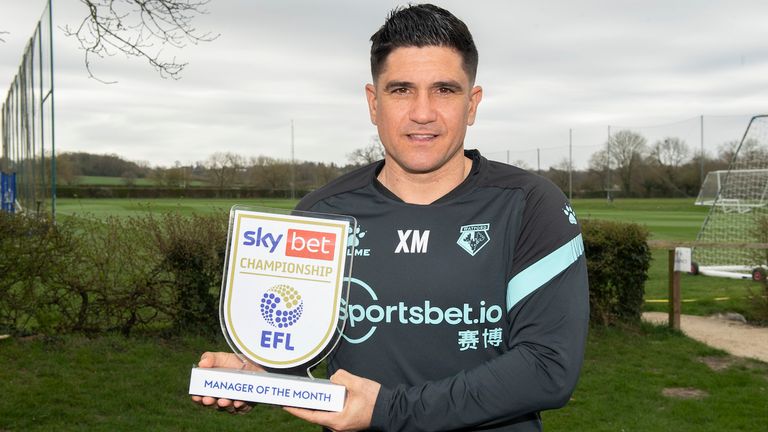 Watford manager Xisco Munoz has been named the Sky Bet Championship Manager of the Month for March.

March was moving month for Munoz’s men. They began it embroiled in a three-way fight for the second automatic promotion spot and ended it in style, six points clear of Swansea and Brentford after a perfect five wins, scoring 12 goals and conceding just two.

Munoz said: “We enjoy our work and give our maximum. That’s important for the group, the players, the staff and the club. The award is for everyone who helps the team.

“Relationships are so important at the training ground. If we are together we have more power. It’s amazing when you feel everyone has the same goal and same objective.”

Sky Sports’ EFL pundit Don Goodman said: “The Hornets will probably look back at March as a pivotal month as they set themselves apart from the chasing pack in their hunt for automatic promotion.

“When they needed to back up a very decent February, Munoz guided his men to five superb wins on the bounce, putting Watford in prime position for an instant return to the Premier League at the first time of asking.” 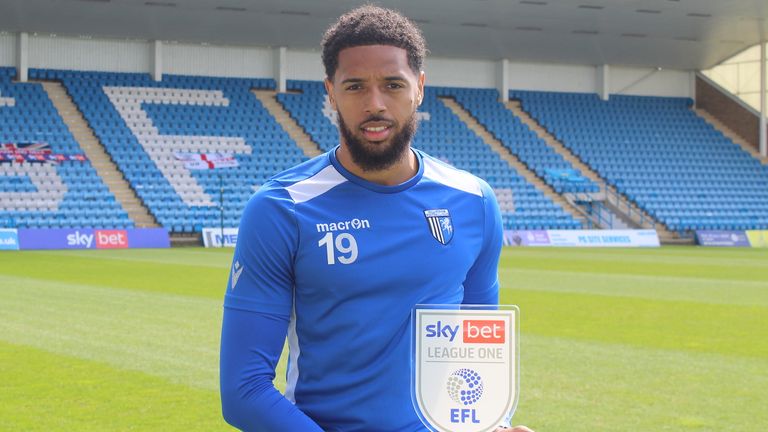 Gillingham striker Vadaine Oliver has been named the Sky Bet League One Player of the Month for March.

March brought a breath-taking eight goals in as many games for a forward who maintained his physicality through a daunting schedule. His angled drive against Ipswich, superb anticipation at Swindon and a towering header against Wigan were the highlights.

Gillingham manager Steve Evans said: “The big man has been excellent all season. There has been a period of four or five weeks where he’s a little bit unplayable. When he’s at his best people can’t deal with him.

“Vadaine lives and breathes it; I love the big fella, I love what he’s about and if a player deserved recognition in our team for being so professional, so humble, and so gifted at times, then it’s him.”

Oliver said: “It’s been a great run for myself and the team. On a personal note I am buzzing to win the award.

“My favourite goal has to be my second against Ipswich, cutting in from the side and applying the finish.

“I hadn’t scored for a while and as a striker that gets to you a bit but I sprung on an opportunity at Portsmouth, and from there I just built confidence.” 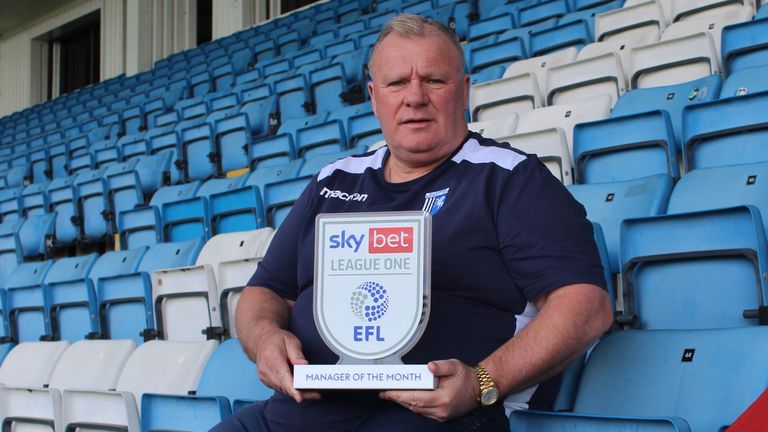 Gillingham manager Steve Evans has been named the Sky Bet League One Manager of the Month for March.

His high-energy side didn’t give their opponents a moment’s rest in March, pressing, harrying and playing their way into the play-off places. The 3-0 win at Lincoln was the highlight of a haul of 17 points and 16 goals from eight games.

Evans said: “The award is in recognition of the players really because they have delivered the performances, and some fantastic results along the way.

“It was a period we knew, if we had any hope of getting around the play-offs, we had to get some results. We are a decent side now, full of good players. March was tough, a lot of long journeys and late nights, but well worthwhile.

“The players, and staff, are giving everything to the cause. The boys have been fantastic.”

Sky Sports’ EFL pundit Don Goodman said: “Points at this stage of the season are worth their weight in gold, and Gillingham came out of March with a very decent haul thanks to their frenetic, swash-buckling efforts over the course of the month.

“Steve Evans has his players fighting for every ball, and this mentality led to a mightily impressive 17 points from eight games.” 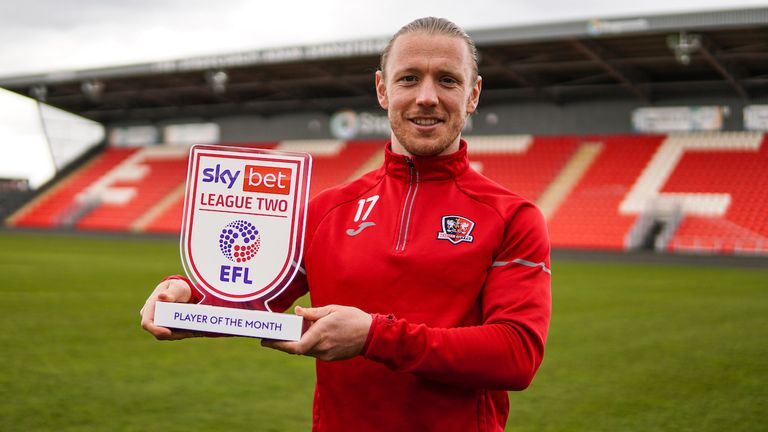 Exeter City midfielder Matt Jay has been named the Sky Bet League Two Player of the Month for March.

Five goals and an assist for the central midfielder who has become the fulcrum of Exeter’s attacking play with his vision and energy. He scored a thrilling hat-trick breaking forward against Orient and a stunning free-kick at Scunthorpe.

“He’s up there in that group of players vying for Player of the Season and rightly so, his goal return has been fantastic – right place, right time, all action in attack, a real club man and a great person to work with on a daily basis.”

Jay said: “I’m absolutely delighted. I felt like I had quite a good month in March and it’s nice to be recognised, so I’m very, very pleased.

“It’s been going really well this season, but we’ve only got a few games left so hopefully we can push on as a team and myself, but I’ve had a pretty good season so far and I’m looking forward to finishing it strongly.

“The hat-trick was probably one of the best moments of my career, up there with this award, so it can sit nicely next to the match ball at home. Everyone deserves the award, but it definitely makes it sweeter when you’re up against such great competition.” 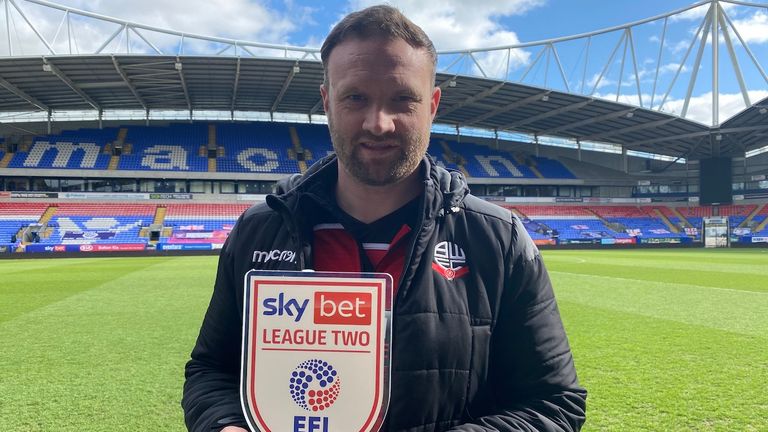 Bolton Wanderers manager Ian Evatt has been named the Sky Bet League Two Manager of the Month for March.

Remarkably, his side matched their February record in March – five wins and a draw from six games. That consistent form included crucial wins over promotion rivals Cambridge and Forest Green.

Evatt said: “I’m fortunate enough to be the front for it all but it’s the hard work from everybody that gets you these awards.

“The players, the rest of my staff, the management team and everyone around the club, this is for us all. But I’m sure we’ll swap the three I’ve won already for the big one at the end of the season – that’s the main goal!”

“His troops extended their unbeaten run until the end of the calendar month, and most impressive of all were their wins over table-toppers Cambridge and a Forest Green side right alongside them in what is proving to be an almighty scrap between plenty of clubs for those top three automatic promotion places.”

League One highlights and round-up: Lincoln climb to second