The start is important. It is important to get a good start, get your position, get where you want to be through the early part of the race. Inside or outside, up with the pace or in behind, and tracking the right horses.

The fact that they have moved the start up the course, closer to the first fence, is a good thing. There is still noise there at the start, adrenaline is still up, but there isn’t as much noise as there used to be when the start was right in front of the stands.

It is the speed to the first fence that catches out a lot of horses. I suppose the fact that it is an unusual-looking fence as well, a spruce fence, different to the normal birch fences that they are used to jumping.

It is not a particularly difficult fence, but horses can over-jump it. There’s more of an adrenaline rush for horses too with the big field and the atmosphere. Even experienced horses can be affected.

There’s an atmosphere that causes both horse and rider’s adrenaline to be up. The second fence is just an ordinary fence. Hopefully you have negotiated the first one safely and settled down a little, so you just hope to meet the second fence on a good stride and go and jump it.

The third fence is the first big test. It is a big ditch, it is similar in size to The Chair, but it is a fence that probably doesn’t get recognised as being a big test.

It is a wider fence than The Chair, so in theory you should have more room at it, but there are still lots of horses around and it is still a big fence, it is a big test.

Then you see the small hedge on your left-hand side, and the field starts moving to the right as you approach Becher’s Brook. Becher’s is number six, and it’s still a tricky fence, despite the modifications. The drop on the landing side is not as severe as it used to be, but there is still a drop.

Also, speed catches a lot of horses out again. They are going into it faster than they used to, because the drop is not as severe as it used to be, and that causes problems.

The other thing about Becher’s is that the field generally jump it at an angle. The fence is on a slight turn, so jockeys tend to move towards their right before the fence so that they can jump it on an angle to the left.

That can restrict your line of vision on the approach to the fence, as the horse in front of you is making his turn before you make yours.

Add that to the drop and it makes it all even more severe.

Foinavon is the smallest fence on the track, but it does cause problems. It’s also on a bit of a turn, and they tend to angle to their left at it, so you can run into traffic problems.

Also, after the drop at Becher’s horses can be expecting another drop, so they can get a bit of a surprise when they hit the ground on the landing side so quickly. 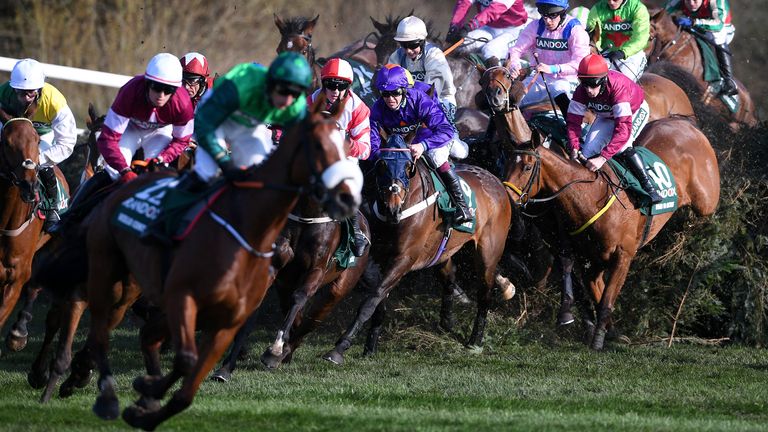 Obviously the turn at the Canal Turn is the most severe on the course, it is a 90 degree turn, far more severe than at Becher’s or Foinavon.

Riders angle out so that they can jump the fence at an angle, save ground on the landing side, and that can make it all very tight on the corner.

Everyone heads for the corner, so it can all get fairly congested there.

Valentine’s is also a tricky fence, but it is not as tricky as Becher’s. The field is well spread out at that stage.

You have a bit of room, even on the first circuit, and that makes things a little easier.

There is a good long run down that line of fences down the side of the track, from the Canal Turn until you get back to the Melling Road before you join the racecourse proper again.

The field are happy to fan out, it is a straight run and you have plenty of time to get back in again before you have to turn again onto the racecourse.

There’s a bit of a time to gather yourself, start taking stock of where you are and where you want to be.

It is completely different to any other race in that sense: the first mile is about surviving, then you can start to think about where you are in the race.

So you come back onto the racecourse proper, up over the second last and last fences on the first circuit.

If you have survived until then, if you have jumped the fences up to that point, those fences shouldn’t really be causing you any concern.

You should be into a nice rhythm by now, the horse knows the fences, he knows what to expect, and those two fences are good fair fences with no real catches. Getting ready for The Chair, there is a funnel effect. It is a narrow fence, so there can be a bit of a scramble for position.

It’s a big ditch. It’s unusual for a modern fence to have such a deep ditch and such a high take-off board. And there’s a slight incline into it, so the fence sits up a bit.

That, and the fact that it is quite a narrow fence, probably makes it look bigger than it actually is, it makes it look more daunting.

Plus, if you have a faller, he can bring down a couple, because of the narrowness of it.

Once you have negotiated The Chair, the Water really shouldn’t cause you an issue. Then it’s out onto the second circuit and do it all over again.

The first fence on the second circuit is just an ordinary fence. If you are in contention, you will have jumped well to that point. If you are there, you have a good rhythm going, the horse is comfortable with what he’s doing, the jockey likewise.

BECHER’S second time, you are still in the middle part of the race really, just hunting away. You’d like to think you have that rhythm, that you are on an even keel, jumping fences as you meet them. It’s a long way to there, but it’s still a long way from there home.

You still have fallers at that point, horses are starting to get caught out as they are coming under pressure, they’re not able to keep that rhythm going. Generally though, if you’re travelling well and you have jumped to that point, you should be fine.

If you’re beginning to get on the back foot, you’re asking more questions and your horse is probably starting to make mistakes.

CANAL TURN second time, the race starts to turn on again, and then the cracks start to show.

The next four fences, over VALENTINE’S and all the way up the side of the course back to the racecourse, horses are on the stretch a little, and it’s not happening as easily for them. A slight mistake at that point and you’re probably gone.

Then you come back onto the main track. Horses are arriving up on the bridle turning in, but it’s still a long way from there, and by the time you reach the last they could be gone. 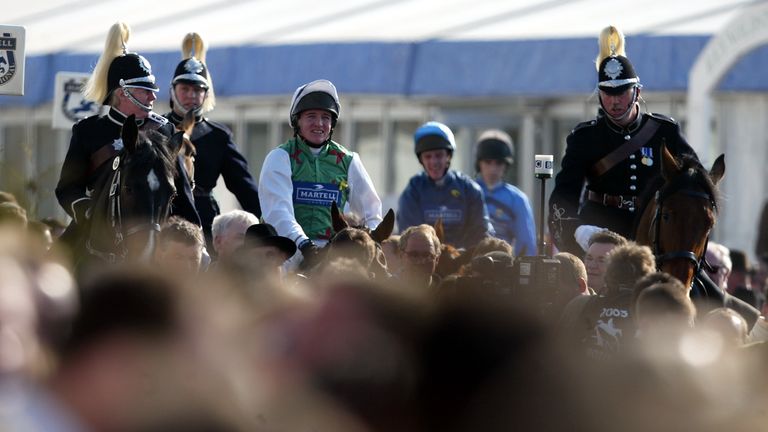 The race can change a lot even from the turn in, from the run to the second last until the line.

It all depends on how well you’re going, at that point. You see horses bolting up in the National, they fly around the ELBOW and away they go.

But you see others, apparently travelling well at the second last, and just failing to get home. It’s a long run home but it’s flat. It’s obviously the trip that finds horses out, not an uphill climb.

It’s having gone nearly four and a quarter miles, it’s further than most of them have ever gone in their lives.

Follow the build-up to the 2021 Grand National on Sky Sports Racing and coverage of the race across Sky Sports’ digital platforms.