MATT BARLOW: The curious case of the bickering Belgians… tales of sabotage, lies and fake news involving Kevin De Bruyne and Co are worthy of Hercule Poirot himself

A late call-up for Hercule Poirot may not go amiss as Belgium boss Roberto Martinez struggles to unravel the mysterious affair of the whispers in the sand.

Who said what about whom and why? Who is too old? Who is too slow? Who is sulking and who doesn’t care? What of the row? Who was to blame and how did it all come to leak out in the French press and sweep over the border into Belgium?

Will this turn murderous if the Red Devils are left to stew inside their luxury retreat 55 miles from Doha near the Saudi Arabia border? And can Thibaut Courtois truly focus on his Andrej Kramaric homework while organising the mole-hunt expedition? 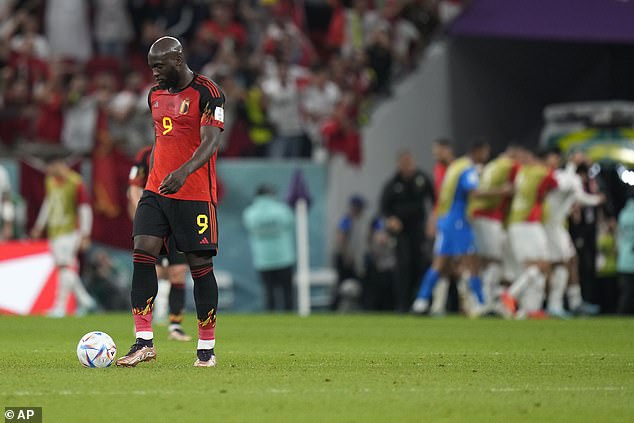 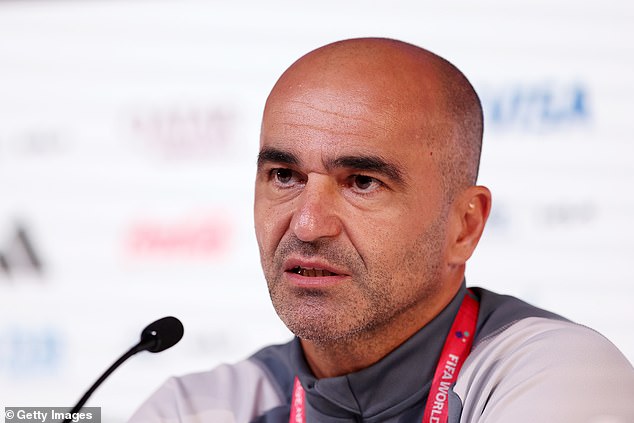 Martinez suspects sabotage and was yesterday railing against what he claimed was ‘fake news’, a story published in the usually-reliable French newspaper L’Equipe about a dressing room bust-up after Sunday’s defeat by Morocco, and against the Belgian media for the ‘own goal’ of picking up the story and amplifying it.

Goalkeeper Courtois had his say, blaming ‘too many lies’ on social media, and full back Timothy Castagne confessed the barrage of criticism of their performances in the opening World Cup games were proving a distraction ahead of today’s must-win Group F tie against Croatia.

‘That’s true, we let that criticism affect us to a certain extent,’ said Castagne. ‘Maybe we heard people saying we weren’t a golden generation and started asking questions and doubting ourselves.’

Confidence levels remain fine, though, according to the Leicester full back. ‘Not as low as people think, six or seven,’ he added, begging more questions about Castagne’s confidence index but there simply wasn’t time. 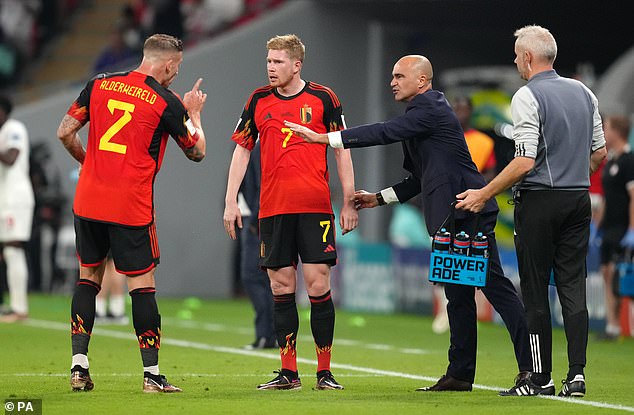 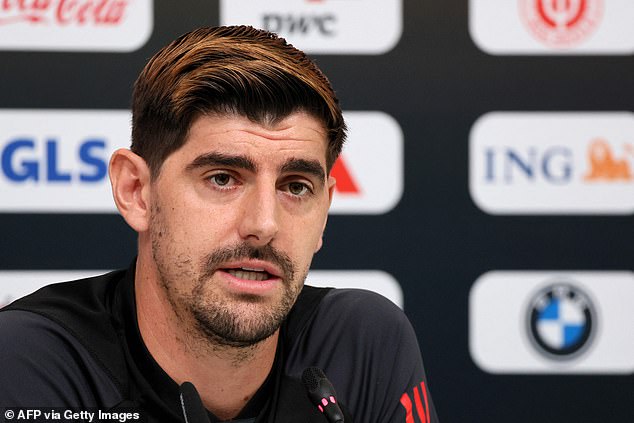 Real Madrid’s Thibaut Courtois insisted there are ‘too many lies’ to believe, on social media

There was Monday’s team- bonding barbecue to unpack, and the clear-the-air meeting designed to ensure everyone could air grievances.

Kevin De Bruyne lit the fuse on all of this with a public admission that the team was too old and had ‘no chance’ to win the World Cup, which followed what seemed to be a heated on-pitch argument between him and Toby Alderweireld during a scratchy 1-0 win against Canada.

It was an honest assessment. De Bruyne is a perfectionist footballer prone to pessimism when things are not going to plan. A fair one, too, because some of the greats of this Belgium generation are in decay. Jan Vertonghen and Dries Mertens are 35, Alderweireld and Axel Witsel are 33 and De Bruyne and Eden Hazard are 31.

Seven of those starting against Morocco were 30 or more, and the average was 29.9. Hazard, flippant as ever, did not help matters with a mischievous post-Morocco quip about the defence being ‘not the fastest’ when asked what was going wrong. 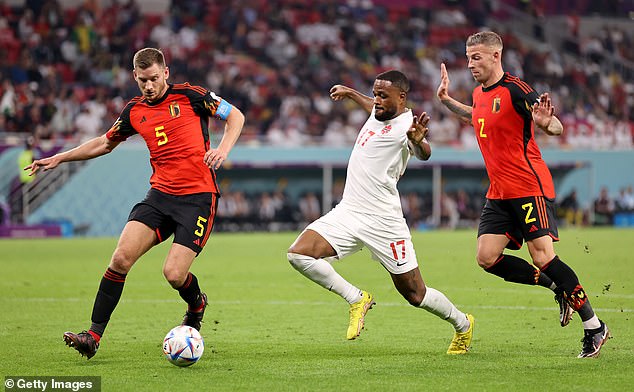 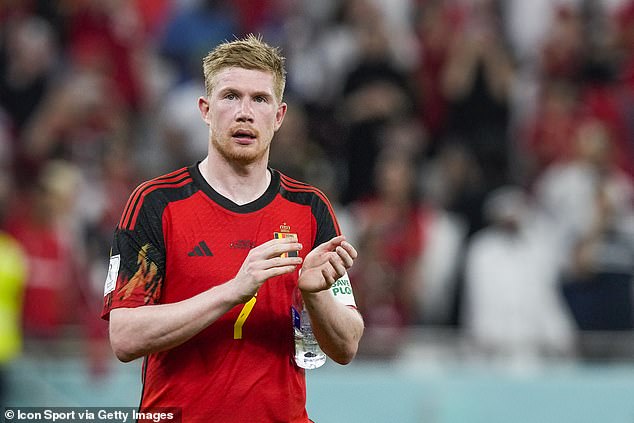 This prompted a spat in the dressing room at the Al Thumama Stadium, where Vertonghen was supposed to have confronted Hazard. Vertonghen demanded to know if he thought Hazard was ‘too slow’, to which Hazard, seldom serious, replied, ‘Yes, it’s true, but I am old too.’

Martinez dismissed the reports of a fight as fake but, on Tuesday, Hazard confirmed there were words exchanged if nothing else.

‘The guys know my character,’ smiled the Real Madrid forward. ‘Jan came to talk to me about it and I told him it was true, he is not fast, and he agreed.’

It is the sort of meltdown more usually associated with the France team during a World Cup tournament but not everyone is surprised. Belgium have been sliding this way ever since what was probably their high-watermark at the World Cup in 2018. 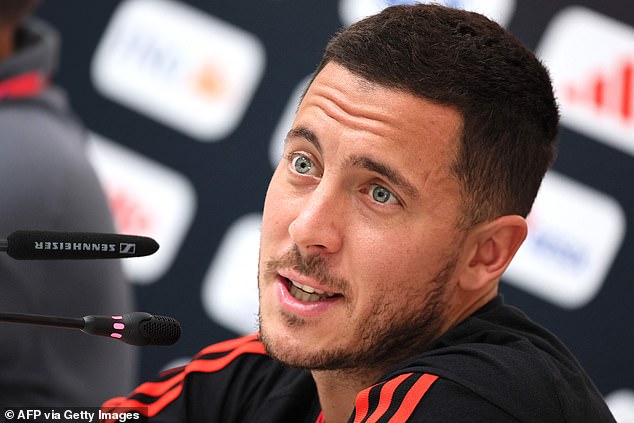 That was the golden chance for the golden generation. They were outstanding against Brazil in their quarter-final before falling to France in the semis.

Another chance for silverware was then lost to France in the semi-finals of the UEFA Nations League last year.

Belgium were 2-0 up with an hour gone in Turin and still crashed to defeat, conceding a third in stoppage time.

They qualified for this World Cup without defeat, topping the group in which Wales came second, and remain second in the FIFA world rankings. Yet there was not the buzz of anticipation heading to Qatar. 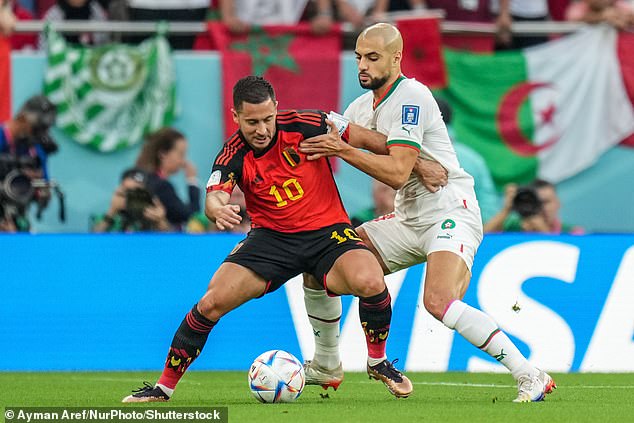 It feels like the end of a cycle. Hazard has barely played in three years since he left Chelsea for Real Madrid, fighting an ankle problem with a titanium plate fitted and then removed because it was causing him concern.

Gone is the explosive turn of pace that made him the best player in the Premier League at his peak. Also gone is Vincent Kompany.

Romelu Lukaku has spent most of this season battling hamstring injuries and returned for 10 minutes against Morocco on Sunday. It was his first football for a month and now all eyes are firmly on Belgium’s record scorer in the hope he can grab the goals to rescue this campaign.

Lukaku cannot, however, stop the sands of time for the Golden Generation.