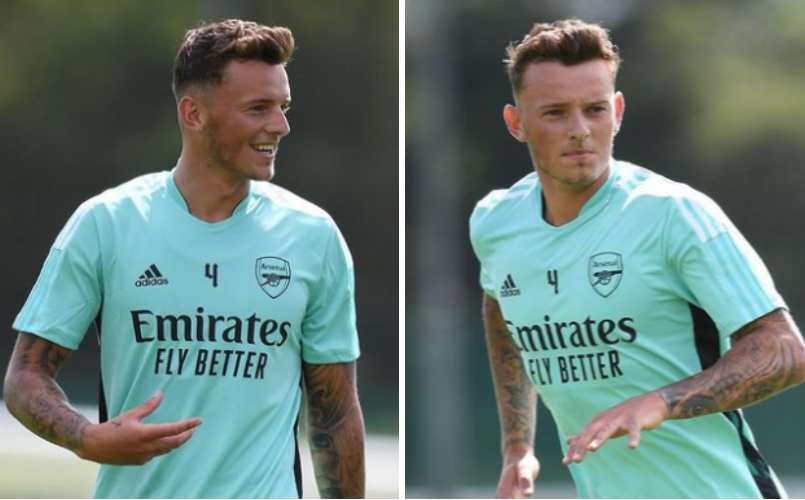 Ben Whtie was put through his paces in training against his new Arsenal teammates less than 24 hours after his £50million transfer from Brighton was rubber stamped.

The England international had been earmarked by Mikel Arteta as David Luiz’s long-term successor with the veteran Brazilian centre-half having left the north London club at the end of last season.

White passed a two-part medical earlier this week and will be in contention to feature against Chelsea at the Emirates on Sunday as the Gunners step-up their pre-season preparations.

Arteta’s side will meet the Champions League holders in the opening fixture of ‘The Mind Series’ before facing north London rivals Spurs at the Tottenham Hotspur Stadium next weekend.

The Arsenal boss already has the likes of Pablo Mari, Calum Chambers, Rob Holding and Gabriel Magalhaes to call upon for those fixtures, but will hope his latest recruit can make an instant impact.

‘Ben was a top target for us and it’s great that we’ve completed his signing,’ said Arteta on Friday. ‘Ben has been educated with two very good clubs, Brighton and Leeds, in recent seasons.

‘He has benefitted well from two very good coaching set-ups and has shown with both Brighton and on loan with Leeds what a strong talent he is.

‘Ben is an intelligent defender who is very comfortable with the ball at his feet and his style fits perfectly with us.

‘And of course, he is still young, so his age and profile fits with what we are building here. We are all looking forward to Ben being central to our future long-term plans.’