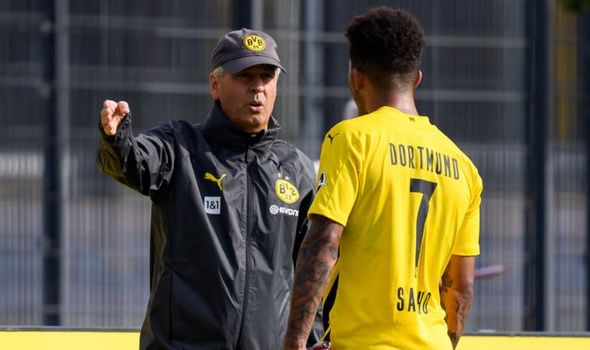 Borussia Dortmund head coach Lucien Favre thinks Manchester United’s summer pursuit of Jadon Sancho has affected the winger’s performance this campaign. Sancho has only scored one goal in six appearances for the Bundesliga side this term.

In contrast, he scored 20 goals across all competitions for Dortmund last season.

Favre had to fight to keep hold of the 20-year-old during the previous transfer window.

United had been monitoring the former Manchester City youngster all summer but failed to meet Dortmund’s August 10 deadline.

The Red Devils submitted a bid closer to the October 5 transfer deadline but that was quickly rejected.

Dortmund had slapped a £108million price tag on their prized asset and that valuation was never met.

Sancho refused to force through the transfer but Favre thinks the speculation is playing on the star’s mind.

“Every player has slow periods,” Favre said. “There was a lot of talk about Jadon during the summer – something like that can be a factor [to bad form].”

He added: “No player is consistently in top form for an entire year, that’s impossible. You have to accept that.”