Borussia Dortmund continued their battle to win the Bundesliga title with a narrow 2-0 victory over Wolfsburg at the Volkswagen Arena. And Raphael Guerreiro continued his blistering form, opening the scoring before Achraf Hakimi made the result safe. It suggests that, having struggled in the weeks before the coronavirus crisis brought football to a halt, Guerreiro is back to his best.

Dortmund’s biggest problem this season has been consistency.

There’s no denying that, on their day, they’re one of the biggest attacking forces on the planet. With players like Jadon Sancho, Marco Reus and Erling Haaland they’ve got a strike force that many can only dream of.

Last time out, Dortmund were at their blistering best.

Schalke were battered 4-0 at the Westfalenstadion, ensuring Lucien Favre’s side claim the bragging rights in the Gelsenkirchen derby.

Erling Haaland opened the scoring that afternoon, scoring his 13th goal for the club following his January arrival from Red Bull Salzburg.

There was a goal for Thorgan Hazard, too, with the Belgian irresistible on the day. 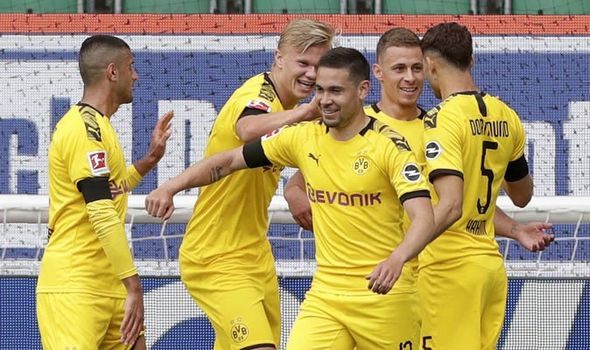 But the star of the show for Dortmund that day was Guerreiro, who scored two impressive goals for Favre’s team.

And, on Saturday against Wolfsburg, the 26-year-old stepped up to ensure his side pick up three crucial points in the battle for the league title.

Of all the Dortmund players who have featured since the Bundesliga’s return, it is the Portugal international who has been the standout.

Before football stopped, he was struggling.

He failed to score or assist in two matches against PSG, while also failing to sparkle in matches against the likes of Werder Bremen, Freiburg and Borussia Monchengladbach. 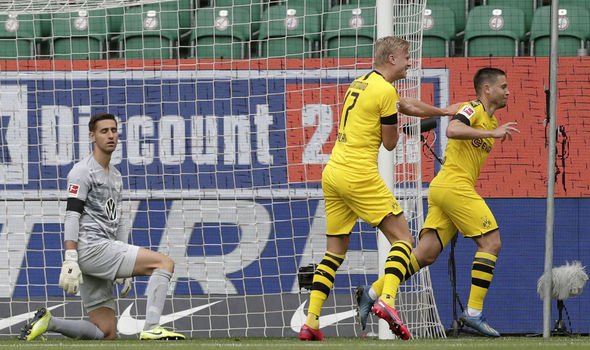 That has led to calls for Favre to drop him and give him a breather – particularly with Julian Brandt mostly on the bench.

He’s made himself nearly undroppable at the perfect time, too.

With Jadon Sancho still feeling his way back to full fitness, there’s been an opening out wide. And Guerreiro has now surely played his way into the side for Tuesday’s epic showdown with Bayern Munich.

Whether he can blitz the current Bundesliga champions remains to be seen.

But he’s gone back to the player he can be and that will no doubt worry Hans-Dieter Flick’s side.

Borussia Dortmund fixtures: The next five matches for Lucien Favre’s side