For 83 minutes here, it seemed the defining – and perhaps lasting – image of the Premier League’s pay-per-view project would be the ball cannoning off the face of Jake Livermore and into his own goal.

The decision to demand supporters pay another £14.95 to watch top-flight football has prompted howls of fury and derision.

This latest instalment of that ‘premium product’ provided a small dose of comedy, too, thanks to Livermore’s first-half finish that was more befitting a budget bloopers DVD. 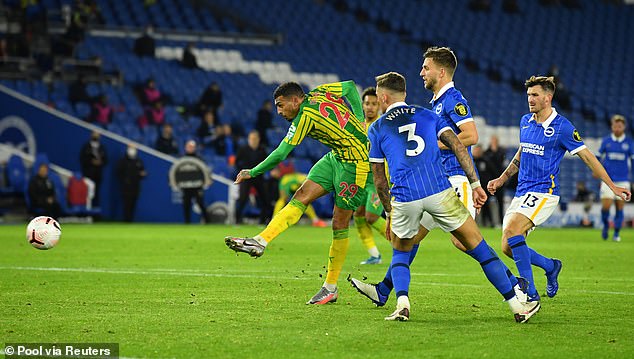 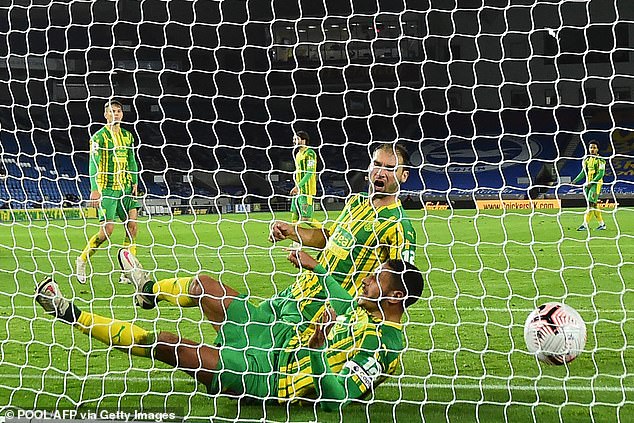 But then with the clock ticking on this game – and perhaps the league’s controversial experiment – Karlan Grant found the perfect time to make his own mark.

The forward’s first Baggies goal earned a share of the spoils that Slaven Bilic’s side more than merited. By the end, they could have stolen all three points.

In the end, they still await a first win but after another difficult week – with Bilic reportedly furious with the sale of Ahmed Hegazi – some welcome relief.

For Graham Potter’s side, meanwhile, this was another day when they failed to turn superiority into a win. Those Brighton fans who joined the PPV boycott won’t feel they missed too much. 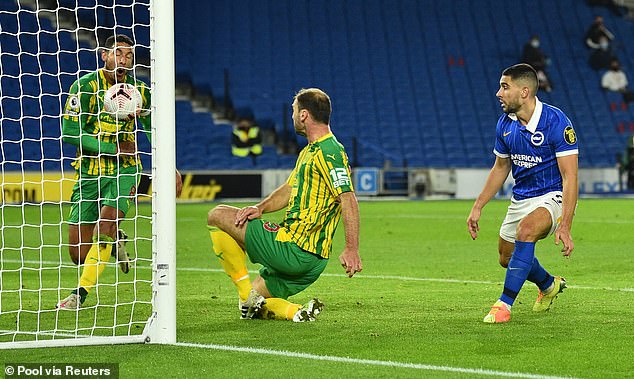 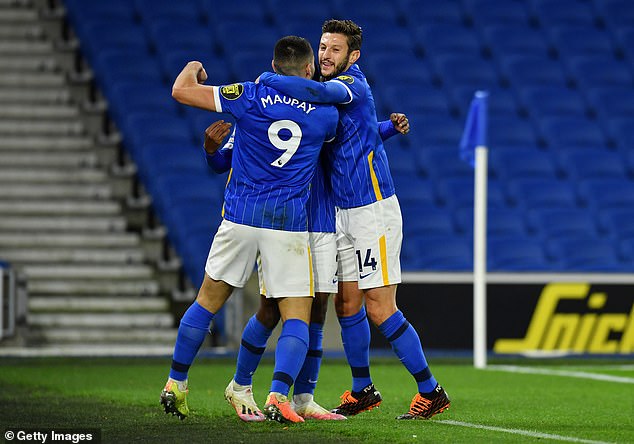 Instead it’s West Brom who head home the happier side after a second-half display that will breed encouragement around the Hawthorns.

Because if they are to make this anything but another bounce on their yoyo between the first and second tiers, then Bilic must find a more fruitful formula on the pitch.

In the first half here, there was little to suggest the answer lay just around the corner.

New boy Grant was handed a second successive start but next to no service. Instead, West Brom were quickly on the back foot. Brighton thought they had the lead on 15 minutes when Neal Maupay volleyed home Adam Lallana’s chipped cross – only to be denied by the offside flag. 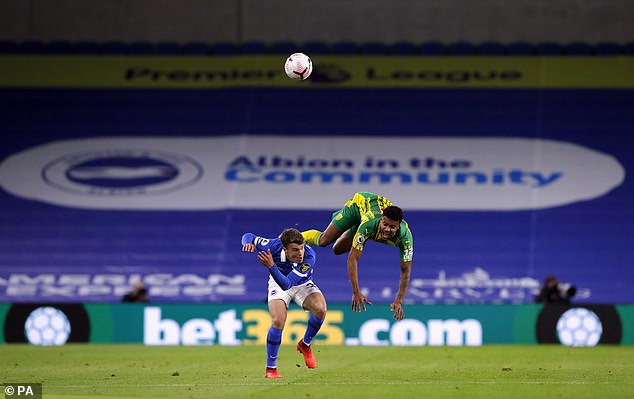 The lack of chances in the first-half made for poor entertainment for the £14.95 price tag

Then, midway through the half, only the outstretched leg of Sam Johnstone kept the visitors on terms.

From a sharp Brighton counter, Leandro Trossard cut West Brom apart with a lovely through ball.

Lallana ran on to it but chose to pass, rather than shoot.

His square-ball found Maupay 12 yards out but Johstone stayed big to keep out the low effort.

Suddenly Potter’s side were playing with more precision and purpose; West Brom appeared to be teetering. 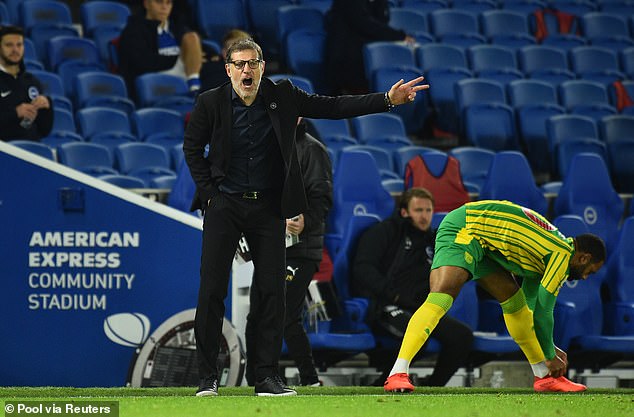 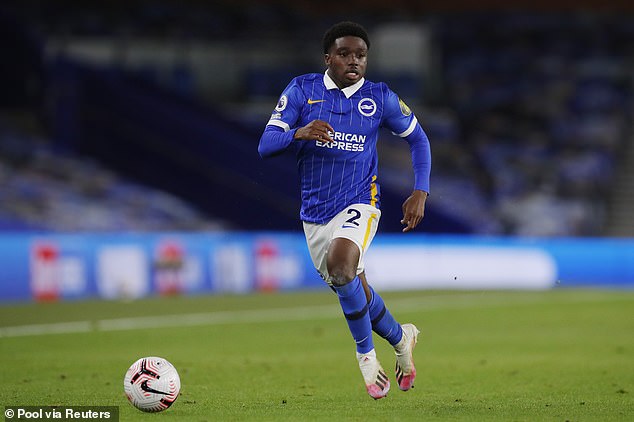 When the breakthrough did come – five minutes before the break – it was comical for all but those in yellow and green.

After Lallana’s shot was blocked, the ball broke to Tariq Lamptey, whose low cross was cleared by Branislav Ivanovic, off the face of Livermore and into his own net.

That would have done little to improve Bilic’s mood but he did at least garner a response from his side. After the break they pressed with more urgency and ambition. Soon it was Brighton’s turn to wobble at the back.

From a bouncing ball, Conor Gallagher struck a fierce effort from the edge of the box that was blocked. 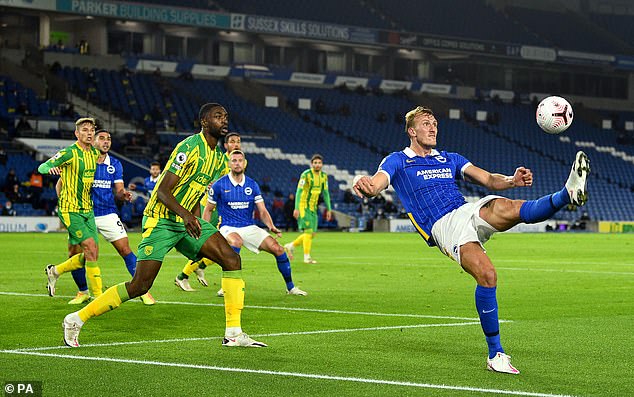 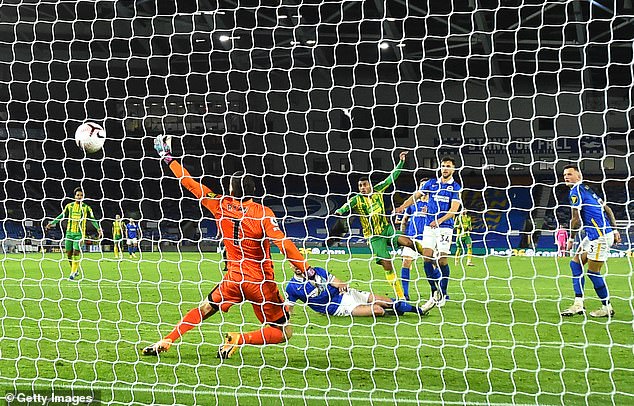 Grant was substituted immediately after scoring his winner, a goal that had been coming

Brighton regained their composure and seemed to be cantering towards three points when West Brom came again.

With 25 minutes to go, Costa Pereira curled just wide from outside the area before Filip Krovinovic forced the first meaningful save from Mat Ryan.

The goalkeeper was left rooted to the spot shortly after when another rasping effort from Pereira flew past his post.

Eventually, Bilic’s side got their reward. Callum Robinson’s low cross found its way to Grant, who took a touch and then, with virtually his first sniff at goal, fired into the roof of the net.

The referee blows his whistle and it’s a point each at the Amex.

Both sides showed both worrying and encouraging signs, with the Baggies offering nothing in the first-half in attack and falling behind to a calamitous Livermore own-goal.

Brighton were good value for their lead at half-time but they faded as the match went on, and two subs by Slaven Bilic in the second-half tipped the balance of the game.

The introduction of Robinson and Edwards saw West Brom playing much more positively and eventually equalised through a powerful Kyle Grant strike.

On the evidence of tonight, these teams need to make some improvements fast or they’ll be sucked into a relegation battle this season.

West Brom win a corner and it’s half-cleared by the hosts, with the loose ball falling out to Pereira on the edge of the box.

Pereira has had his fair share of chances tonight and not taken them, blazing this one over.

West Brom are the ones pushing for a winner here, looking energised and determined.

Robinson is causing problems with Bilic screaming them on, putting a cross in but Brighton are across to it.

It was coming and it’s deserved after a much improved second-half. West Brom have the equaliser.

Substitute Robinson bursts down the wing and puts a low ball into the box, with Grant taking one touch into space and smashing into the roof of the net. Great finish.

Brighton have just eased off too much and failed to make use of their possession.

Grant is replaced instantly after the goal, with Matt Phillips coming on. 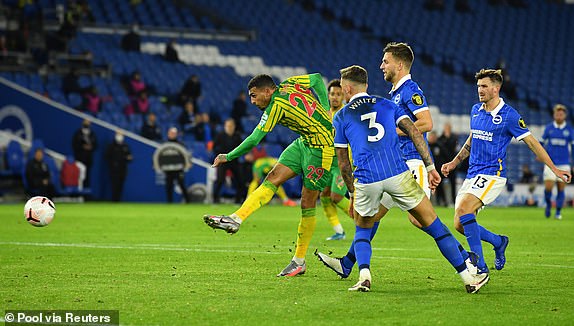 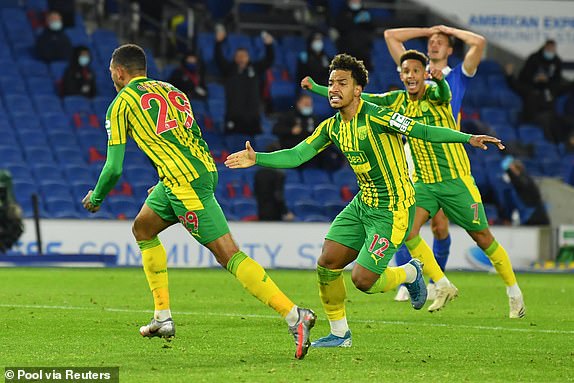 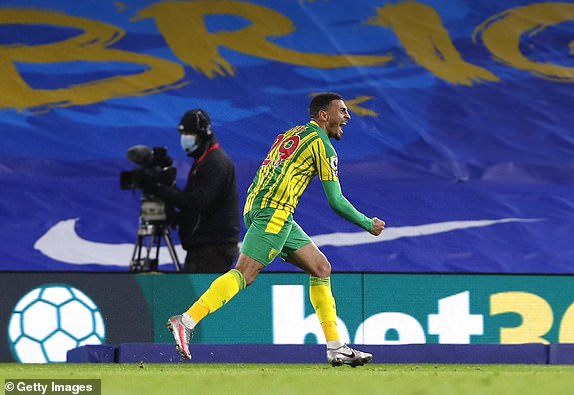 Potter uses his final option, with Alzate on for the impressive Trossard.

Pereira goes much closer this time, meeting a loose ball bouncing out of the Brighton area first-time and just bending the ball outside of the post.

The Baggies are fighting here, really showing desire for the first time tonight. Those substitutions brought an instant change

Alexis Mac Allister is on the field now, replacing March after a decent performance from the winger.

Good spell for the Baggies here after the substitutions, as Krovinovic goes for a powerful hit and forces a strong save from Ryan.

Bilic’s men are looking much improved now, and need to take advantage with a goal as time wears on in this tight match.

There’s the best chance yet for the visitors, with Matheus Pereira taking a strike from the edge of the box. The winger had time to think but the shot was poor, bending out for a goal-kick.

The Baggies boss has sent on Robinson and Edwards to try and win this game after disappointing performances by the man heading to the bench, Livermore and Diangana.

Lallana jogs off after winning a corner with a hard-running move, as Pascal Gross comes on in the former Liverpool midfielder’s place

Brighton have settled into the same pattern as the first-half, comfortably keeping West Brom at bay and hogging possession, but struggling to break through the visitors.

West Brom press forward on the counter with Gallagher on the move, but Brighton snuff out the attack.

Here we go for the second-half as West Brom get us going.

Can the Baggies respond after a really poor first-half performance. 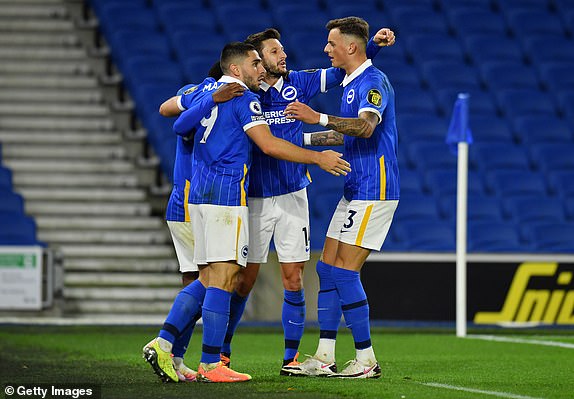 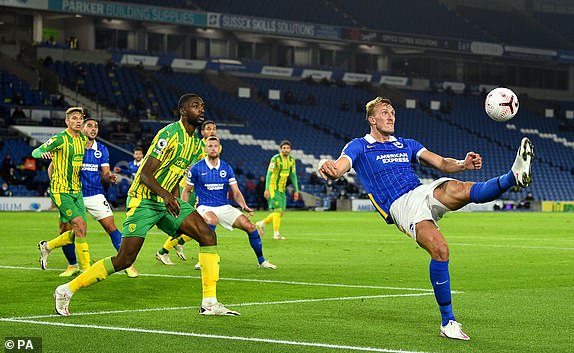 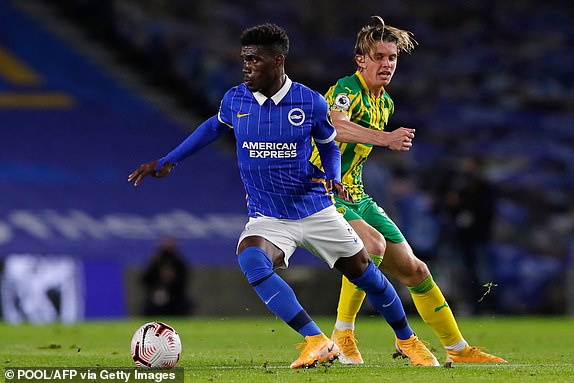 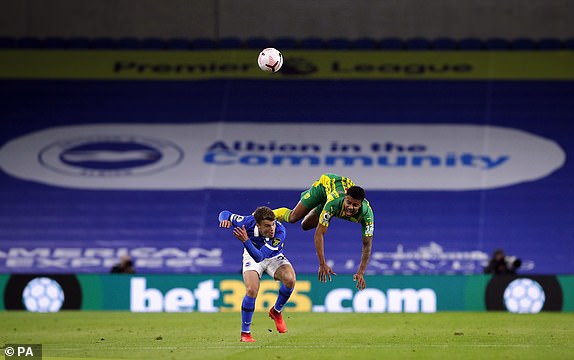 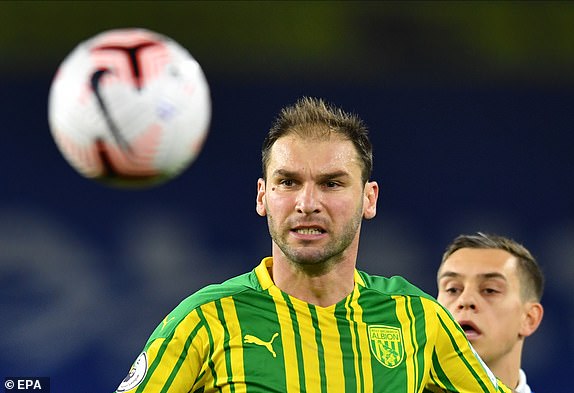 Brighton are the deserved leaders at the break, looking much the better team here.

It was a dire first-half with very few chances, as Slaven Bilic’s side offered almost nothing going forward before a comical piece of defending from Ivanovic and Livermore handed Brighton the opener.

I’m sure Bilic is ripping into his players right now, while Potter will be asking for more of the same.

After forcing the first goal Lamptey is the first man into the book.

Embarrassing from West Brom at the back, gifting a deserved opener to the hosts.

Tariq Lamptey is at the centre of it, putting a great cross into the box with his second attempt only for Ivanovic and Livermore to get in a mess, with the Serb’s clearance hitting the Baggies skipper and ending up in the net along with both players. 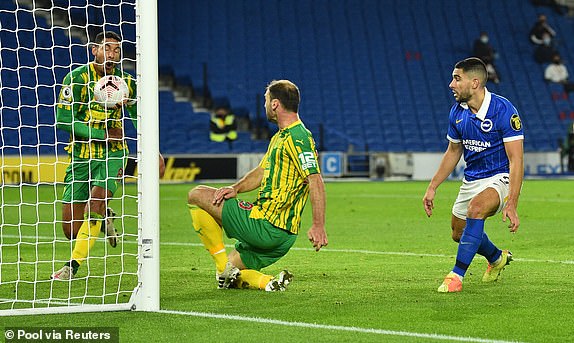 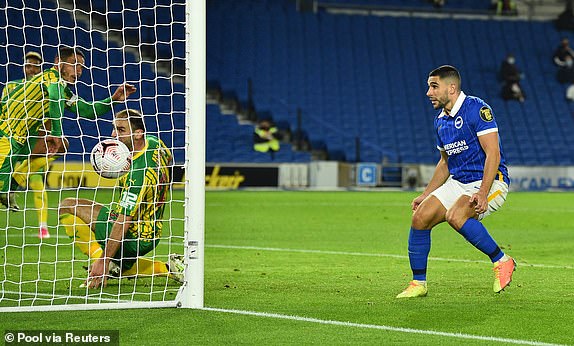 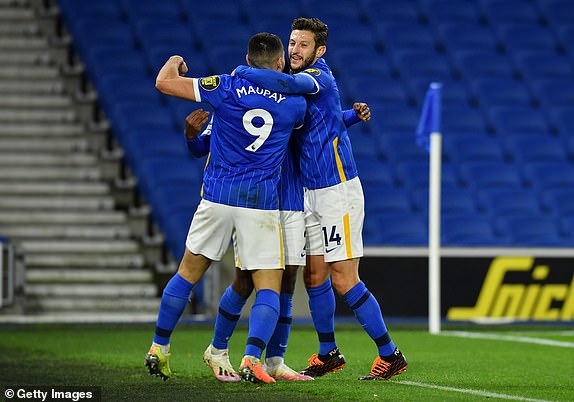 Another good chance for the hosts as Ivanovic clumsily gives the ball away and Trossard strides forwards, cutting inside and finding space to strike from 20-yards, but it’s straight at Johnstone.

The hosts come forward again with March whipping in a great ball for Maupay, but the striker messes up his run and his first-touch is clumsy. Must do better.

The resulting corner from Trossard is cleared away by the Baggies, who aren’t offering much going forward.

A decent chance at last, as Brighton break forward with Adam Lallana bursting into the box and squaring to Maupay, whose low shot is stopped by the leg of Sam Johnstone.

Very good save but Lallana should have shot himself. Brighton marginally the better team so far, but it’s been a dire half of football. 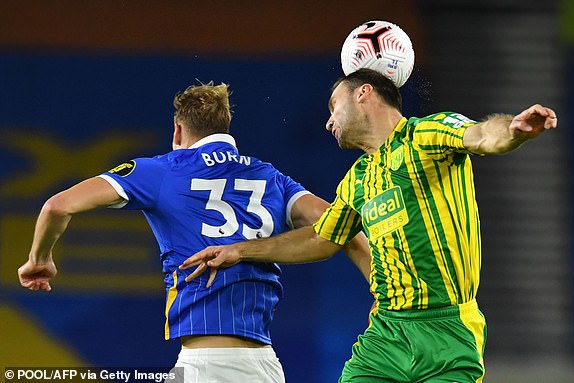 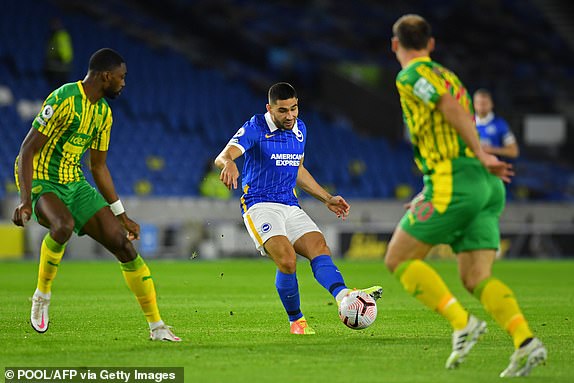 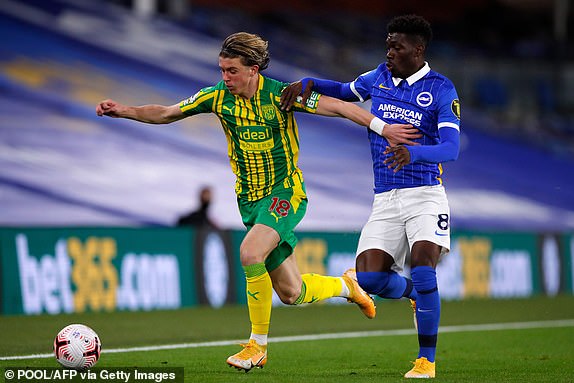 No need for VAR on that one, as Maupay scores from close-range but the linesman instantly has the flag up. Neat finish, but the striker needed to be more alert.

Branislav Ivanovic concedes a free-kick and it’s Trossard who sends the ball into the box, but nobody is on the end of it for the hosts, eventually going out for a Baggies throw.

The first shot on goal is West Brom’s, as Filip Krovinovic fires one from range straight at Matthew Ryan.

Slow start to the game, both teams in no hurry.

And we’re off, with Brighton getting us underway after all 22 players and officials take the knee.

The Baggies are in their bright green and yellow away strip, Brighton sporting their home blue and white get-up.

The players are on their way out of the tunnel, with West Brom moving first as Bransilav Ivanovic motivates his team while they wait for Brighton.

Just 10 minutes to go before kick-off at the Amex on this chilly Autumn night. 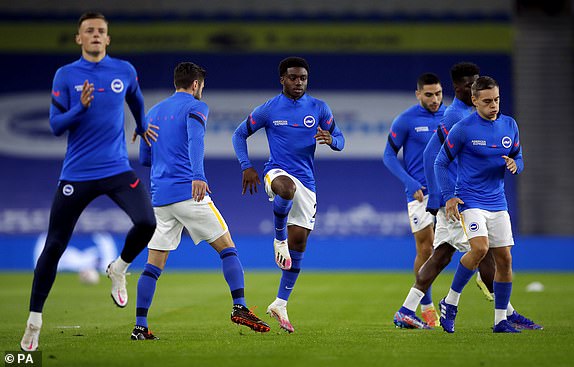 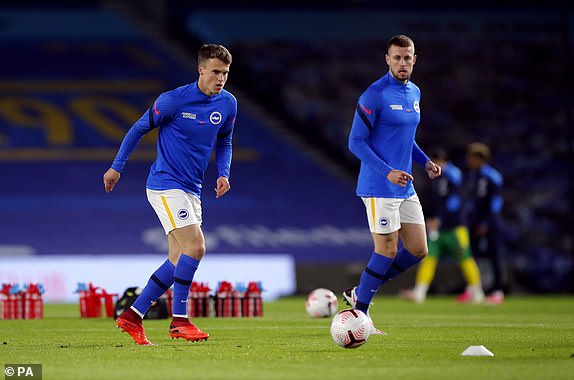 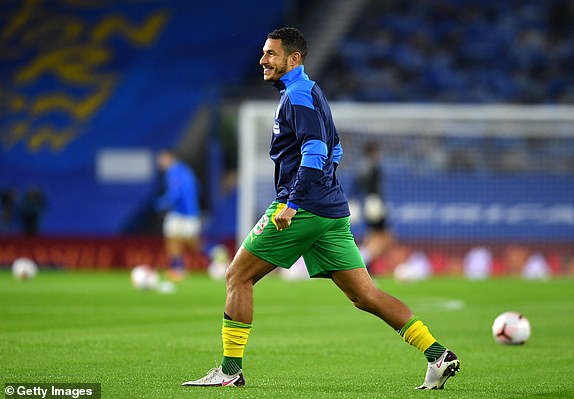 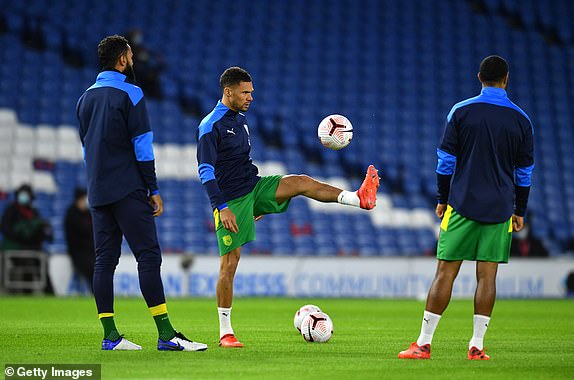 Tonight’s fixture forms part of the Premier League’s new £14.95 charge for certain matches, and Brighton fans are set to join rival fans who have skipped the game and instead donated the price of the fixture to charity.

Lewis Dunk is missing for this one with the Seagulls skipper on a three-match ban, but Graham Potter could bring Danny Welbeck off the bench for his debut.

Only one change for the visitors, with Ahmed Hegazi replaced by Ajayi at centre-back after Bilic was left furious by West Brom selling the defender to Saudi side Al Ittihad yesterday.

Hello and welcome to Sportsmail’s coverage of West Brom’s trip to the south coast to face Brighton on Monday evening.

The fixture could be a vital early indicator in the battle to avoid relegation, with both sides hovering above the drop zone after five games.

Stay tuned here for all the build-up and live match updates from the Amex Stadium clash. 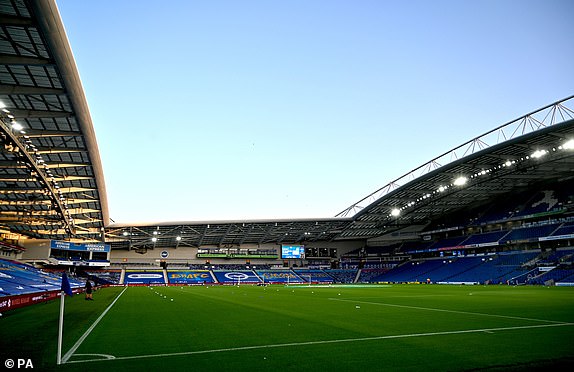