Brentford 2-0 West Ham: Bryan Mbeumo and Ivan Toney keep Bees buzzing as they continue good form to all but secure their own safety with a victory over the Hammers

It might not be mathematically secured yet, but Brentford will be a Premier League side next season.

Victory against West Ham saw Thomas Frank’s side move on to 36 points and put 12 points between themselves and the bottom three, while also providing what could be the telling blow to their opponents’ Champions League ambitions.

A worrying run of just one point from 24 available at the turn of the year had seen them slip towards trouble. 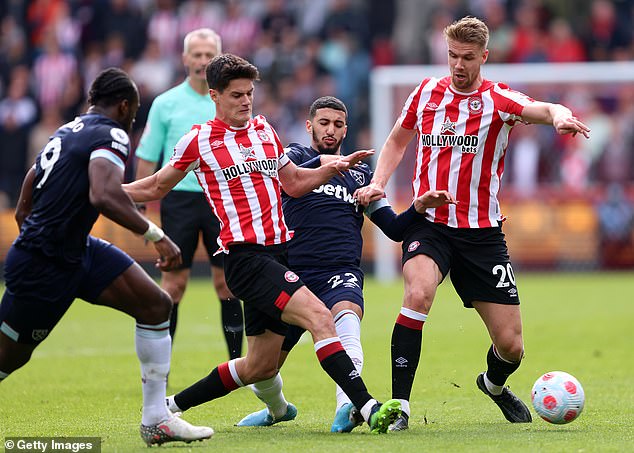 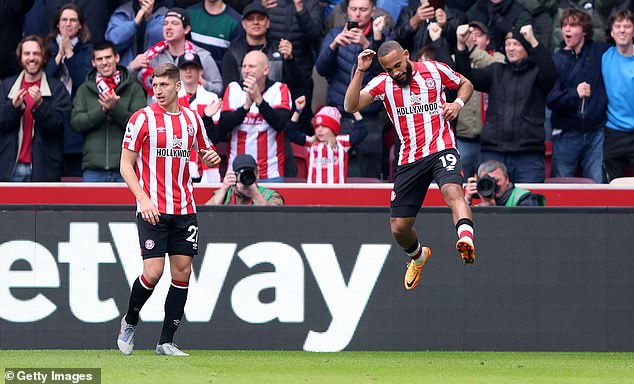 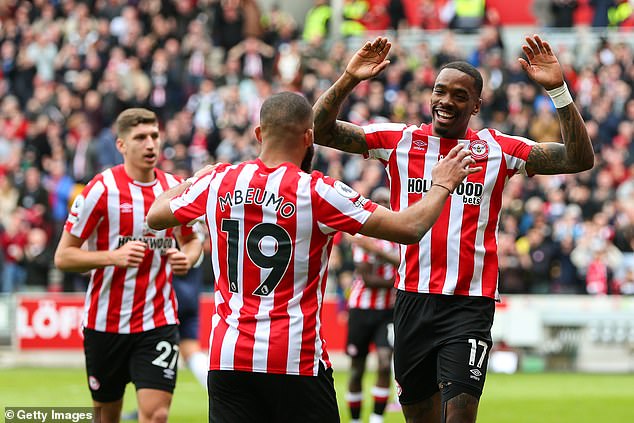 A recent upturn of four wins from their last five has flipped the script. It is no coincidence that those wins have coincided with every start Christian Eriksen has made for the club.

The Dane kept up his 100 per cent win record when on from the beginning, producing another masterclass in the middle of the park, though it was Bryan Mbuemo and Ivan Toney who produced the telling moments here.

Mbuemo fired home first from a Toney flick on moments after the break. He later returned the favour, turning a cross back into the striker’s path to head home. 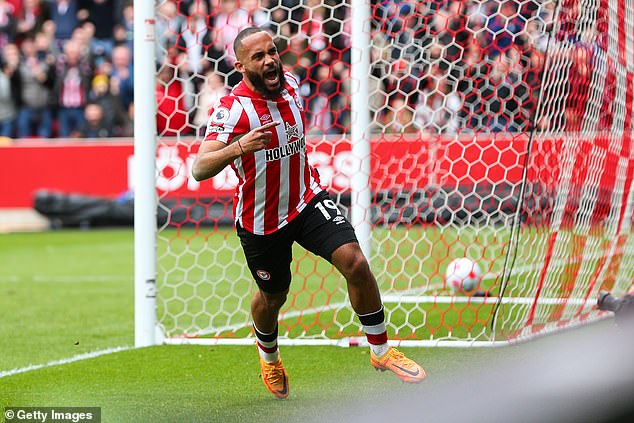 For David Moyes it was a day that could prove more damaging beyond their top four ambitions.

The sight of Kurt Zouma limping off during the first half was hardly ideal prep for the second leg of their Europa League quarter-final in Lyon this Thursday, especially with a backline already depleted by the suspension of Aaron Cresswell.

The Scot was in need of fresh legs after Thursday’s exploits against Lyon. He was able to welcome back Vladimir Coufal from injury here, the Croatian starting at right back for the first time since the draw at Leicester in mid-February.

Manuel Lanzini returned for the first time since his car crash at the beginning of the month, having missed the Lyon clash through suspension.

Despite the gutsy second-half display at the London Stadium on Thursday, the Hammers boss had proclaimed himself disappointed with his side’s performance. There was little in the way of improvement here.

The extra effort summoned on Thursday showed in the opening stages,with the hosts afforded the opportunity to make the early running.

Their first genuine opening came in the 21st minute. A smart ball from Ivan Toney cut through the West Ham defence down the left and Mbuemo raced on to it, his thumping effort forcing Lukasz Fabianski to palm the ball behind at his near post for a corner.

The Hammers responded with an opening of their own, Jarrod Bowen finding space down the right to whip in a cross. Tomas Soucek had timed his late run perfectly but couldn’t generate the direction or pace to properly test David Raya.

Still, it was Frank’s men making the better openings. They rather like London derbies, having now earned 14 from their clashes with rivals across the capital this season, and they seemed to be enjoying themselves once more.

Some neat interplay between Ivan Toney and Vitaly Janelt on the edge of the box created space on the right channel for Mbeumo once again, who shaped to curl his effort into the far corner but only succeeded in ballooning high and wide.

West Ham’s day then turned for the worse on 25 minutes. Zouma, felled earlier in the middle of the park by Christian Norgaard, sat back down on the deck feeling his right ankle. He departed, replaced by Issa Diop.

That change appeared to bring Eriksen out of his shell. Afforded space on the left, 10 yards outside the West Ham area, he made the most of it, picking out Mbuemo on the right-hand edge of the six-yard box with a sumptuous cross.

His team-mate took the ball down but couldn’t get his effort away in good time, a block snuffing out the chance.

The Dane was causing more issues from a set piece on the stroke of half-time, his clipped delivery headed just over his own bar by Coufal. From the resulting corner, Eriksen controlled on the edge of his own area before firing low.

Three minutes into the second half, Mbeumo finally took his chance. The goal was beautiful in its simplicity. 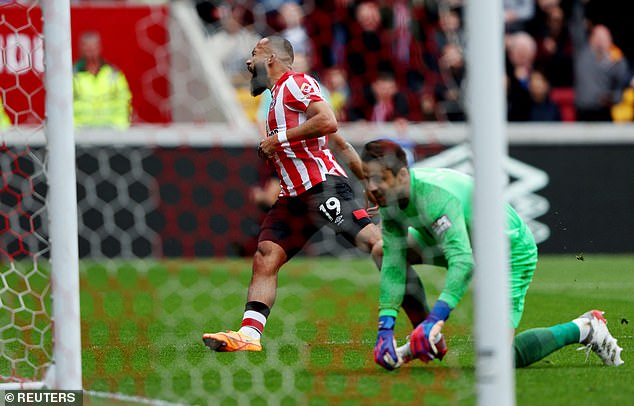 A throw in from Kristoffer Ajer on the right-hand edge of the Hammers box found the feet of Toney, who with one flick of his boot released Mbuemo in behind. He took it first time with his left, fizzing the ball brilliantly beyond Fabianski.

Then came the moment that all but confirms Brentford’s Premier League status for next season.

The move was started by Eriksen dispossessing Michail Antonio on the edge of the Bees’ box. Seconds later Rico Henry was sent charging down the left.

A give-and-go with Yoane Wissa helped him reach the byline and while his cross sailed over the head of Toney, Mbeumo met it with a cushioned volley to tee up the striker to head home for his 12th league goal of the season.

Mbuemo should have had a second on 69 minutes, but he blazed over at the back post. It mattered little. By that stage, it was purely mathematical.