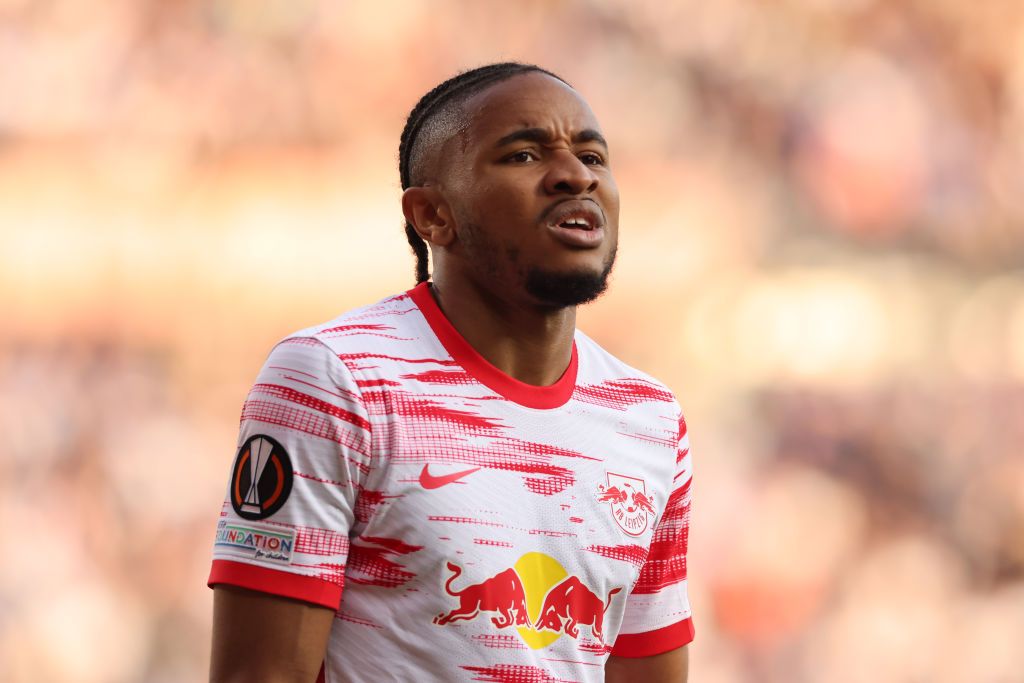 Christopher Nkunku is set to stay at RB Leipzig and sign a new contract despite interest from Manchester United and Chelsea.

The Frenchman, 24, has emerged as one of Europe’s brightest attackers, having scored 20 goals in 34 games in the Bundesliga last season.

His contract runs until 2024 and, along with the Red Devils, is reportedly being tracked by PSG, Bayern Munich and Real Madrid.

However, according to German newspaper Leipziger Volkszeitung, Nkunku will soon put to paper on a new deal at Leipzig, ending speculation surrounding his future this summer.

The report goes on to stay that his contract extension will include a salary increase and a release clause of €60million.

Nkunku’s decision to stay in Germany for at least one more season will come as a big blow to United in their search for new forwards.

The Manchester giants were already knocked back this week after it emerged Liverpool had moved into pole position to sign another one of their targets Benfica’s Darwin Nunez.

New manager Erik ten Hag is keen to bolster his attack ahead of next season after United finished sixth in the Premier League last term and went five years without a trophy.

Meanwhile, the departures of Juan Mata, Jesse Lingard and Edinson Cavani have left gaps in the Dutchman’s squad.

It is believed Nkunku was recommended to the club by interim manager Ralf Rangnick who rates the forward highly and was shocked to learn he was not on the scouting department’s radar.

Chelsea, meanwhile, have also been linked with a move for the versatile forward and had considered him as a potential alternative to Raheem Sterling as Thomas Tuchel looks to add to his wide options.

Speaking to Telefoot, Nkunku revealed he was flattered by the interest shown him by Europe’s elite clubs.

He said: ‘It’s no secret. There are clubs interested in me. Yes, it’s flattering, but it’s also flattering to have a club like Leipzig do everything to keep me as well.

‘I’ll have to reflect well and make a decision. The World Cup is on the way and that’s another factor to take into account.’