Nuno Espirito Santo could not have sourced a calmer current in which to tread some water. Ultimately this will not alter any criticism swirling around his start at Tottenham but at least it does not add further negativity.

Turf Moor — for so long a ‘tough place to go’ for so many — has now seen only one Burnley victory in 17 since January. Rochdale earlier in this competition, in case you’re wondering. And the Clarets went behind in that one.

So Nuno could not win on Wednesday night. Not really. Not when he left Dele Alli and Harry Winks back in London, with the two of them becoming better players for not pulling on their boots until Lucas Moura settled this tie and sealed a quarter-final spot. 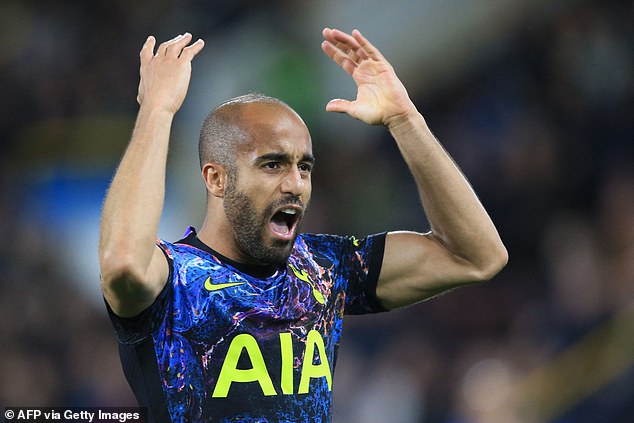 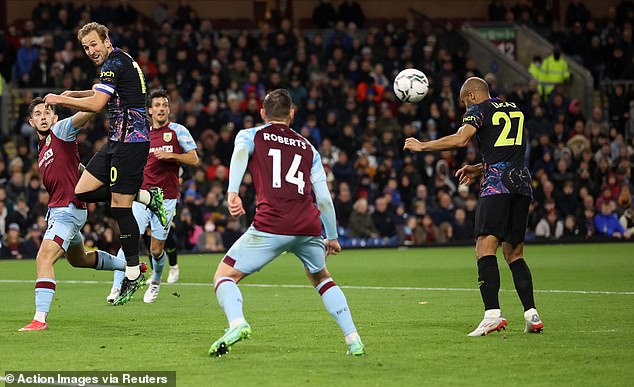 Moura was found unmarked in the box, where he guided the ball into the net with his head 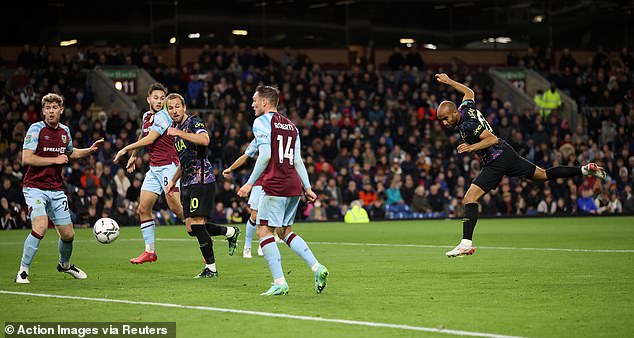 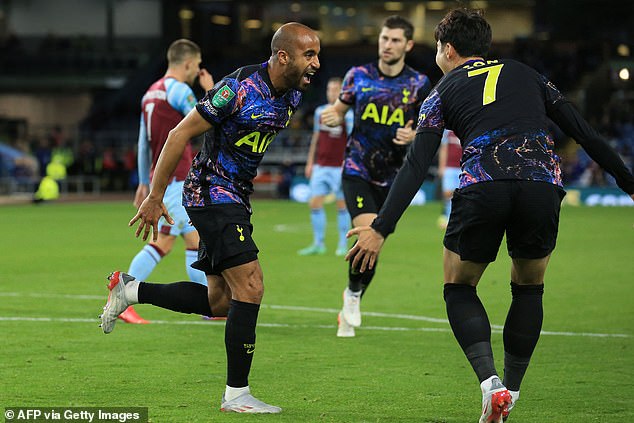 MAN OF THE MATCH: Lucas Moura

Lacklustre and a little bit flat, the scoreline again not mirroring a possessional dominance and that feeling that Spurs are operating well within themselves under Nuno.

This was not entertaining — and both of these teams were to blame, although a little more is expected of one than the other.

Presumably this was not supposed to be a life-sapping experience. Presumably these sides wanted to at least attempt to entertain those who had paid money and braved the Lancashire chill. The plan surely was not to turn them off.

But this was bleak, no shots on target in a first half that left Burnley pining for VAR and Spurs wondering when the real Harry Kane fancies turning up this season.

The two best chances both fell to their skipper, a ruthless, dead-eyed killer before all that with Manchester City occurred in the summer. He seemed to shin a volley from a corner just before the break, while an early chance fashioned by Giovani Lo Celso really ought to have been

dispatched. Lo Celso, the most productive forward on the pitch, sent Kane clear of Nathan Collins but the striker flashed yards wide while off balance.

Collins, meanwhile, wanted a penalty at the other end but referee Peter Bankes ignored the appeals without the ability to go upstairs to double-check. Burnley were also incensed when Oliver Skipp’s studs plunged into Dwight McNeil’s ankle, again to no action.

Their supporters, meanwhile, could have been forgiven for thinking they would not create any sort of meaningful opportunity. 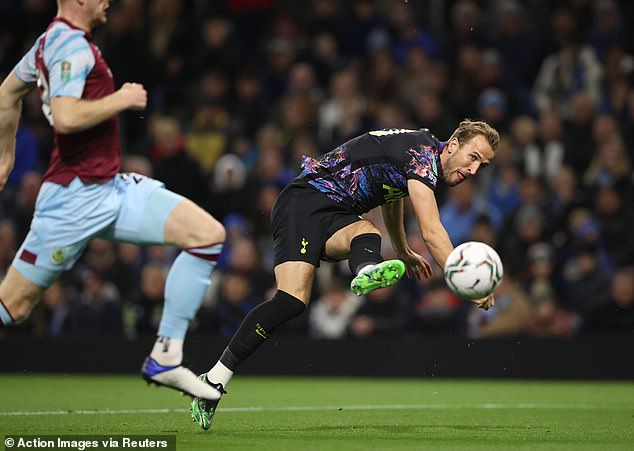 It was another tough night for Harry Kane, who struggled in front of goal against the Clarets 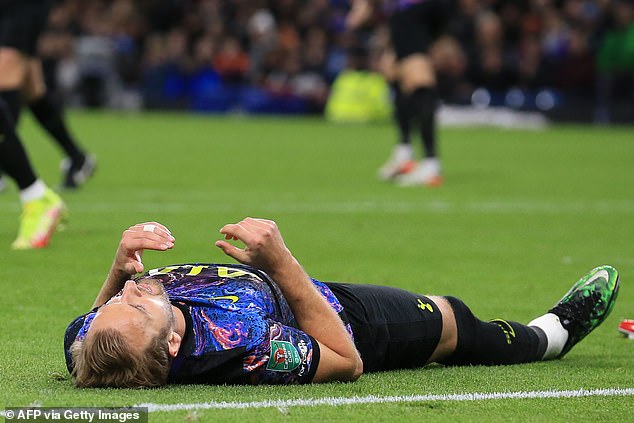 Their only first-half moment of excitement came when Emerson Royal raced around to divert Johann Berg Gudmundsson’s dangerous inswinging cross that had the shape to threaten Pierluigi Gollini’s far post.

Teams are often a reflection of the men who lead them and Sean Dyche had made plain in his programme notes that any sort of cup run will never be his priority. ‘Without wanting to repeat myself, given what it is stake for the club, the Premier League will always remain our primary focus,’ he said.

And it showed from his side, although the manager’s comments were at odds with his captain, Ben Mee, who talked up games ‘under the lights at Turf Moor’ having a special feel and ‘cup ties even more so’. That offered an intriguing contradiction within two pages.

Spurs finally began to take more control, even if that felt loose until much later in the game.

Moura, on for the injured Bryan Gil, represented a constant danger on the break, while Steven Bergwijn missed his kick when trying to volley towards goal. Collins passed straight to Pierre-Emile Hojberg in the final third, only for Hojberg to then dribble straight out of play. 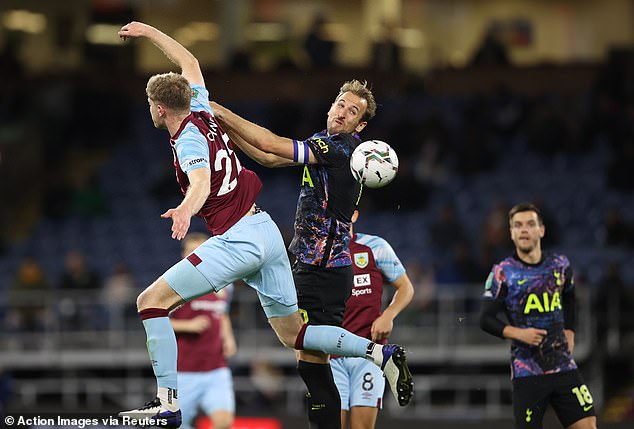 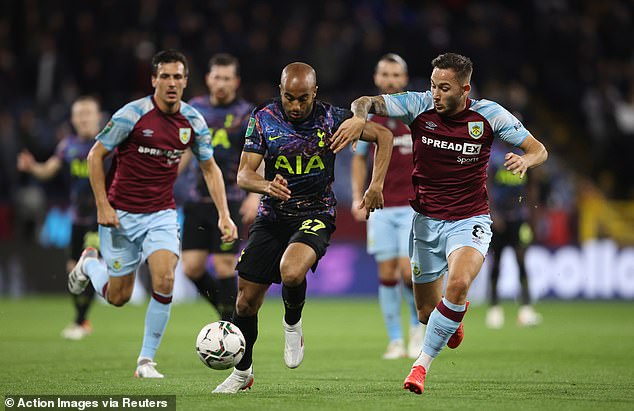 With 25 minutes left, finally a shot on target. Burnley were turned over in midfield, Kane intelligently waited for Lo Celso’s run but the Argentine saw Nick Pope well spread, diverting the effort wide.

The travelling support begged Nuno to make a change and the introduction of Son Heung-min perked the visitors up.

A goal did not feel inevitable yet was probably deserved, Kane dropping deep and shifting to Emerson, the right back’s cross finding Moura alone in the 68th minute. The header had enough to beat Pope.

Dyche threw Maxwel Cornet on, his centre hooked clear from under the bar by Davinson Sanchez, while Ashley Barnes belatedly made Gollini do some work.