Home » Soccer » Callum Wilson: Newcastle United striker out for up to eight weeks due to hamstring injury

Newcastle striker Callum Wilson has been ruled out for six to eight weeks with a hamstring injury.

Wilson has scored 10 goals and provided five assists in 21 Premier League games so far for the Magpies, who he joined in the summer from Bournemouth following their relegation to the Sky Bet Championship.

“Callum Wilson has got a tear to his hamstring so that could be six to eight weeks [out],” Newcastle boss Steve Bruce said, who also confirmed that Fabian Schar and Javier Manquillo will be out for a similar amount of time.

“Fabian Schar [also] has had an operation on his knee ligaments so it’s eight weeks out for him. Javier Manquillo did his ankle ligaments so he could be a similar time out.

“The aftermath of Saturday’s game, losing three players including your centre-forward for weeks is a bitter pill to swallow.

“We hoped it was a grade one but unfortunately it’s worse than that. We don’t think he needs an operation but it takes time.”

Newcastle find themselves 16th in the Premier League after 23 games, 10 points clear of the bottom three, although Burnley and Fulham behind them have played a game less.

They held on for a thrilling 3-2 victory over Southampton on Saturday despite having nine men left on the pitch and next face Thomas Tuchel’s Chelsea – live on Sky Sports – on Monday Night Football, whose side are unbeaten since his arrival as head coach.

Asked about Newcastle’s options for the match, Bruce added: “It’s for anybody to step up. We all know what Dwight Gayle is capable of so we hope he stays well. The same goes for Joelinton and Andy Carroll.

“They’re big boots to fill but there’s an opportunity. [Meanwhile] Ciaran Clark will be available. Fingers crossed with Jamaal Lascelles and Federico Fernández – they’ve both got a chance [too].”

Joe Willock, who arrived at St. James Park on Deadline Day in the January transfer window on a loan deal from Arsenal until the end of the season, could also once again be relied upon after he scored the opener against the Saints. 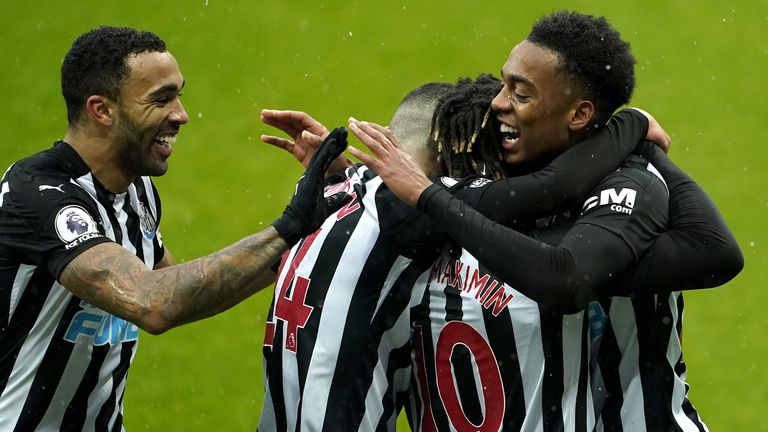 “The one thing you want to do is play well on your debut,” Bruce said. “It was a great piece of skill from Allan (Saint-Maximin) to pick him out and it was a classic midfield player’s goal.

“He’s got the ability to arrive in the box – he’s a terrific athlete. We scored three goals so we got that balance right in the first half. We could have gone 4-1 up then a minute later it’s 3-2 and we’re down to 10 men.

“I was delighted with their attitude, application and their determination to hang on.”