Report and highlights from the Sky Bet Championship clash between Cardiff City and Barnsley at the Cardiff City Stadium as the Bluebirds cruised to victory with goals from Junior Hoilett, Joe Ralls and Harry Wilson.

Cardiff earned three points at home for the first time this season after they cruised to a 3-0 victory over Barnsley.

An early strike from Junior Hoilett and a Joe Ralls penalty put Barnsley boss Valerien Ismael on course for his first defeat in the job before Harry Wilson’s powerful strike secured the elusive win in the Welsh capital.

Cardiff can now focus their attention on closing the four-point gap on the Sky Bet Championship play-off places and the visit of rivals Bristol City on Friday night, while Barnsley will be looking over their shoulders again after opening the door to their relegation rivals.

Last season’s play-off semi-finalists were yet to register their first home victory of the campaign and faced a Barnsley side unbeaten in their last five matches. 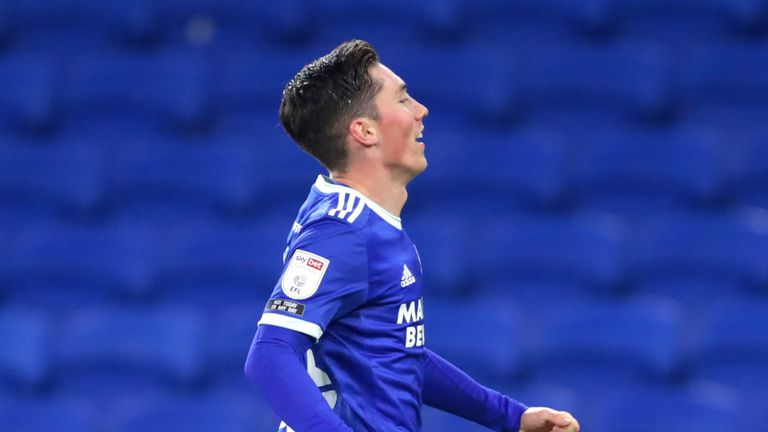 Cardiff manager Neil Harris took drastic action in a bid to break down a Tykes defence that had kept clean sheets in their latest victories over QPR and Watford under new manager Ismael.

The physical forward duo of Robert Glatzel and Kieffer Moore started up front with Wilson in support after the Wales playmaker recovered from a hip issue in time for the clash.

Elliot Simoes was the only enforced change for Barnsley after Callum Brittain suffered a hamstring injury last time out.

The hosts piled on the pressure from the kick-off and had their reward after just four minutes as Junior Hoilett broke the deadlock.

The winger had been denied moments earlier by Barnsley goalkeeper Jack Walton, who had rushed off his line to deny him a sight at goal.

But Hoilett did not waste his second chance when Michal Helik failed to clear Joe Bennett’s cross moments later as he fired a left-footed shot into the bottom corner.

Cardiff’s attacking ploy was proving fruitful as the visitors continued to be overwhelmed by the aerial threat of Moore and Glatzel.

The German forward glanced a Wilson cross just wide less than 60 seconds after the opener, and he wasted another chance in the 25th minute when he prodded a weak shot into Walton’s hands from Bennett’s inch-perfect early cross.

Ismael had seen enough and hauled Eliot Simoes off five minutes before half-time but the change made little difference as Cardiff doubled their lead in the 45th minute.

Wilson played a neat one-two with Moore inside the Barnsley area before he was tripped by the outstretched leg of Helik as he attempted a last-ditch challenge.

Referee Oliver Langford took an age to point to the spot before Ralls calmly slotted the ball into the corner for his third goal in two games to make it 2-0 at the interval.

And Wilson arrowed a shot into the corner from 20 yards out with 13 minutes remaining to turn their home fortunes around before the visit of Severnside rivals Bristol City.