The days of Parkhead being a temple of doom for Europe’s finest are over.

Since drawing with Manchester City in the Champions League when Brendan Rodgers was manager, Celtic have now lost 11 of their last 18 home matches in European competition.

Fortress Parkhead is no more. 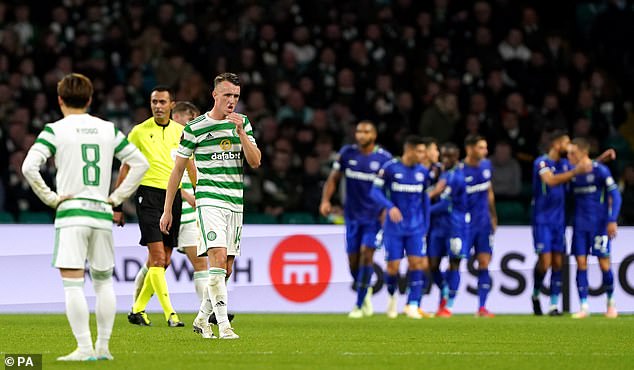 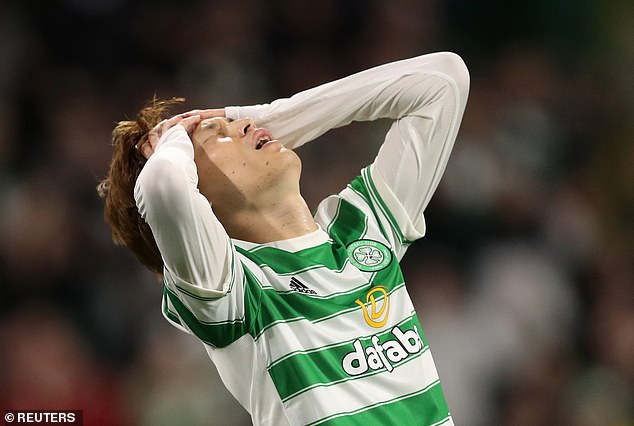 For Celtic, this was a night when football at this level felt like a brutal, punishing business. Engaged in a one-man war of attrition with keeper Lukas Hradecky, Kyogo Furuhashi’s return added pace and energy to their attack. Playing his first game in three weeks, however, the Japanese international couldn’t magic up the scoring touch which delivered seven goals before a knee injury.

But for Hradecky’s brilliance in goal, he could have had a hat-trick. Instead Celtic ended the night on the end of a savage and sobering home defeat.

Bluntly, this is a team incapable of defending. The concession of eight goals in two Group F games to Real Betis and Leverkusen leaves the Parkhead side pointless after two games. Back-to-back games with Ferencvaros now look their best chance of salvation. 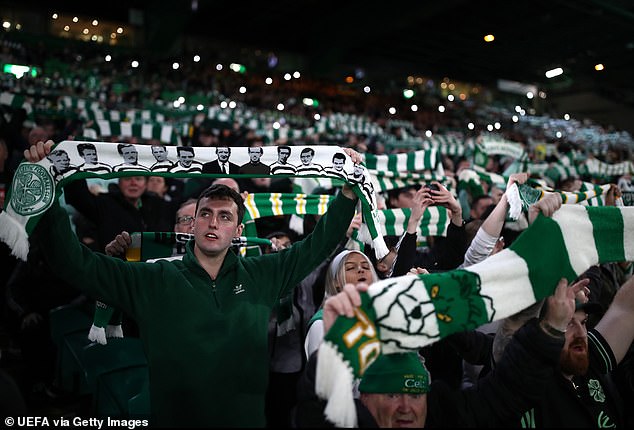 In 18-year-old Florian Wirtz, Leverkusen have one of the emerging talents in German football. And the teenager’s nonchalant finish for the match-killing second goal after 35 minutes summed up why the days of opponents pitching up at Parkhead in a state of fear are well and truly over.

For 27 minutes the home side were going toe to toe with their Bundesliga opponents. Played like a game of ping pong, the action zinged from side to side at breakneck pace. Where Celtic failed to convert some excellent chances, however, the visitors capitalised on every defensive mistake. And there were plenty of those.

The pendulum swung decisively after a moment of personal disaster for David Turnbull. Only the Scotland midfielder knows what he was trying to do when he completely missed his kick for a simple clearance, teeing up a simple cut back for Piero Hincapie to roll the ball into the net.

Eight minutes later another error allowed Leverkusen to double their lead. And this one summed up the growing doubts over the system fans have come to know as ‘Angeball.’

Key to Ange Postecoglou’s gameplan is the full-back coming infield to take the ball as if they were No 8s. Whether he has to the players to do it is another question.

When Anthony Ralston had his pocket picked by Hincapie in the middle of the pitch, Leverkusen broke on the left with lightning speed. Paulinho’s vision and pass picked out the wunderkid Wirtz at the back post and the finish was almost casual.

At 2-0 a full stadium fell silent, the vibrant air of expectation in the opening half hour replaced by a weary resignation. Celtic supporters had seen this movie before.

The regret was that the game started at a breakneck pace, the team in green and white a threat in attack. Lucas Alario nodded the ball into the net after a minute in an early taste of what was to come. The offside flag saved Celtic and within a minute they came close to taking the lead themselves as Furuhashi — his pace and movement badly missed in his absence — rounded Hradecky and looked odds on to tap in until a stunning saving tackle from Jonathan Tah turned the ball out from the corner. 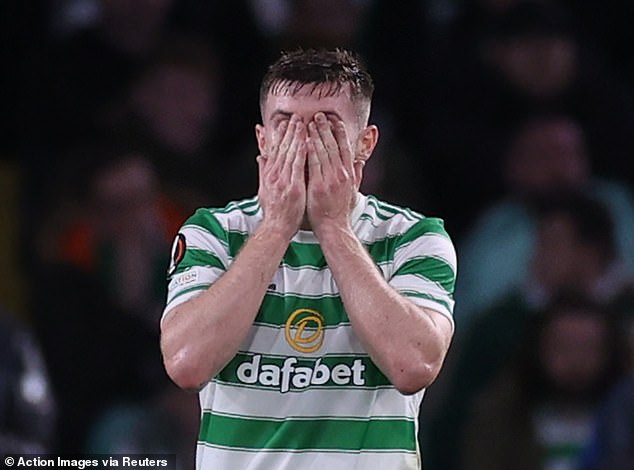 Seconds later Callum McGregor — pitched in for his first start since September 11 — had a dipping shot tipped over the bar from 20 yards.

The movement of Furuhashi carved another superb chance to open the scoring after 20 minutes. A one-two with Abada saw the Japanese make a darting run in behind, staying onside. One on one with Hradecky, the giant keeper stretched out his right boot and turned a low effort round the right hand post. Moments later the keeper was at it again, brilliantly turning a bouncing Adam Montgomery effort fired in slow motion round the post with the tips of his fingers.

Despite the attacking promise, the half ended with Leverkusen comfortably ahead by two goals. Celtic’s implosion, when it came, was self-imposed.

Presented with a meat and drink clearance at the edge of his own area, Scotland midfielder Turnbull tried to be too clever, completely missing his kick and allowing it to run through his legs, Dutch full-back Mitchell Bakker cut the ball into the path of Hincapie, the attacker rolling a simple finish into the net despite the desperate attempts of Montgomery to clear on the line.

When Wirtz stroked Paulinho’s superb pass into the net for 2-0 it felt like game over.

But for Hradecky’s repeated excellence, Celtic just might have made a game of it. Starting the game at a cracking tempo, Furuhashi’s swivel and shot was brilliantly tipped round the post by the keeper. When Jota controlled a raking long ball from Ralston on his chest and forced another terrific save from the Finnish international, Celtic heads visibly dropped.

Their night was summed up by the award of a harsh penalty for a handball against Cameron Carter Vickers after Joe Hart’s save from Jeremie Frimpong fell for Paulinho to smash the ball at goal. On first view the ball appeared to strike the defender’s rib cage. Alario stroked the penalty low into the bottom corner for 3-0.

Celtic’s desperation shone through at times. The one-man wall of Hradecky saved a Jota header at the back post and Furuhashi slashed an easy rebound into the sidenetting.

Hart denied Czech substitute Patrik Schick a fourth with a superb save from a downward header. He could do nothing to prevent the rampant Germans smashing a superb fourth into the roof of the from another substitute Amine Adli in the last act of the night.