Celtic 1-0 Hearts: Kyogo Furuhashi nets 14th goal of the season as hosts narrow the gap on leaders Rangers to four points but victory is marred by injuries to Jota and Stephen Welsh

For Hearts the myopic tendencies of referees in Glasgow remain a source of anger and injustice.

The quality of Kyogo Furuhashi’s 14th goal in 28 games for Celtic was sublime. The legitimacy of the clinical strike which reduced the lead of Rangers at the top of the Scottish Premiership to four points was open to dispute.

Red-carded for disputing a decision in favour of Rangers at Ibrox in October Hearts boss Robbie Neilson coined the phrase ‘long Glasgow blink’ to describe the affliction suffered by officials in games at Ibrox and Parkhead. 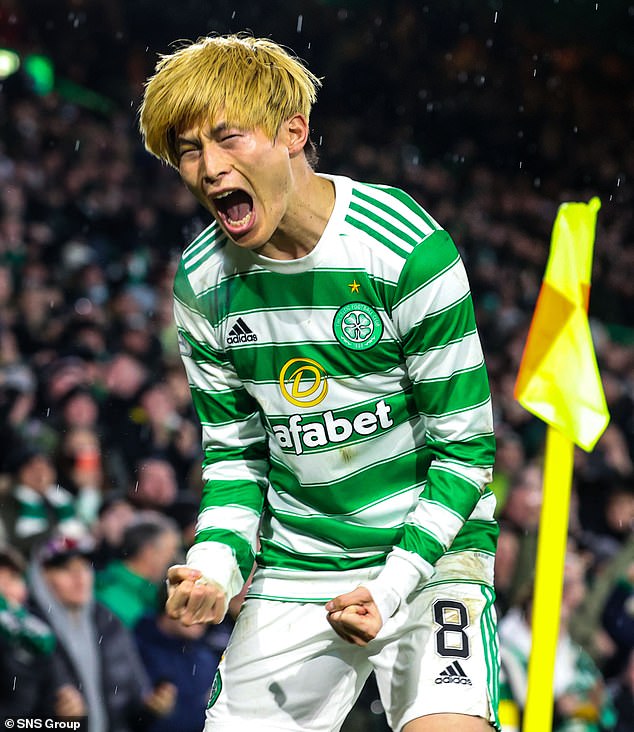 If he hoped to shame the nation’s top officials into changing their ways the evidence of Celtic’s winning goal and the late flashpoint which earned the Hearts boss a yellow card from referee Bobby Madden suggests it didn’t have the desired effect.

Eleven minutes before half-time Furuhashi finished off Anthony Ralston’s driven cross from what looked like a marginally offside position. For a Hearts side which contributed to a thrilling, end to end game of football – it was a slug-fest of a finish – it left a bitter taste in the mouth.

That Celtic deserved to take the lead after some slick football isn’t really the issue. But for a Hearts side battling to make the Scottish Premiership a three horse race every decision counts. And, once again, a big one had gone against them. Twenty four hours after Celtic fans railed against the penalty which handed Rangers a vital win against Hibs, the irony of their own good fortune here should have been lost on no one.

Neilson’s mood was scarcely improved by a booking four minutes from time when substitute Gary Mackay-Steven looked to have been fouled in the area before lashing a low shot wide of the far post. That Celtic finished the game clinging on at times was a testament to a Hearts finish which threatened to replicate their late draw at Ibrox. 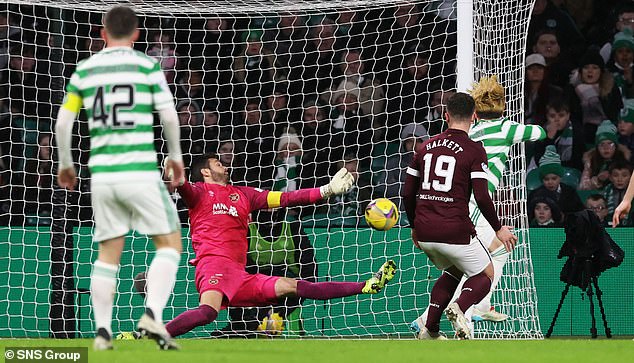 While the visitors failed to test Joe Hart quite often enough the same could hardly be said of Craig Gordon, a man who one again gave his old club cause to regret the day they let him go.

Scotland’s number one was at the heart of an incredible double let-off as early as the tenth minute when he initially put his team in trouble then bailed them out again. David Turnbull picked the pocket of Cameron Devlin on the edge of the Hearts box

Feeding Jota the on-form winger cut inside and forced Gordon into a fumbled stop. James Forrest looked certain to turn the ball into the loose ball into the net, the winger somehow slamming the ball against the post from point blank range after a crucial fingertip intervention from Scotland’s number one. Celtic should have been ahead.

Winners over Celtic on the opening day of the season Hearts were missing man of the match Beni Baningime here. Despite Neilson picking a line-up with pace and width in a determined effort to have a go the visitors found it hard to get close to Joe Hart at times. 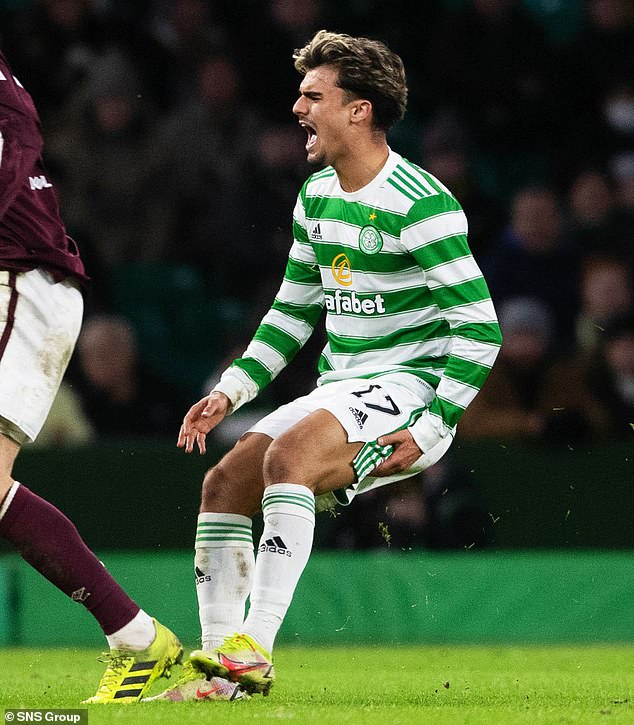 Bizarrely there are some Celtic fans who persist with the idea that the club were right to let Craig Gordon go. A brilliant fingertip reaction save from a deflected Callum McGregor strike forced some to rethink their stance.

It took over half an hour for Hearts to muster their first attempt at goal. A pacey free-kick into the crowded area fell at the feet of defender Craig Halkett and he failed to get enough on a drilled low shot to test Hart. Hearts had cause to rue the missed opportunity when Celtic claimed the lead within the minute through Furuhashi

The quality of the lead-up play was top drawer. Celtic are simply a better team when Tom Rogic is pulling the strings. Making his first start since the end of October the Australian held the ball up on the edge of the 18-yard box, rolling it into thee path of the overlapping Ralston.

The right-back’s whipped ball invited a finish and Kyogo provided one, nipping in to convert at the front post. His first strike since a double against Dundee on November 7 replays showed that the Japenese international was offside. The Celtic support neither new now especially cared. 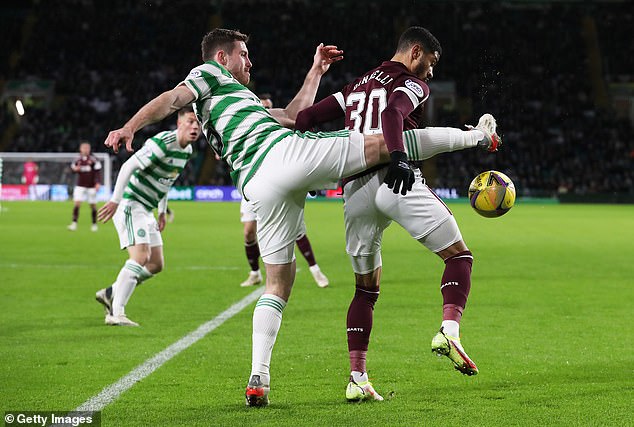 The cross for the goal was Ralston’s last contribution of the night, the full-back limping off moments later with what looked like a hamstring issue. Injuries would be the narrative of a costly win for Celtic. In a month of one game after another they lost Jota and Stephen Welsh in a second half when the game almost turned on its head.

For Hearts it really had to. The last time the Tynecastle side racked up back-to-back league meetings in this fixture was in August 2006. The last time they won at Celtic Park in the league was 2007, 18 of their last 19 visits ending in home wins.

The arrival of top scorer Liam Boyce for the quiet Ben Woodburn after 55 minutes was evidence of Neilson rolling the dice. And the impact was almost instant when Boyce won a corner, Stephen Kingsley running unchallenged into space to head Barrie McKay’s pinpoint set-piece wide of the far post. It was the first big Hearts chance of the game and Kingsley knew it, the defender banging the ground in frustration.

This, now, was a different contest. Gary Mackay-Steven’s arrival signalled an all-or-nothing approach, the air of apprehension around Parkhead telling its own tale. 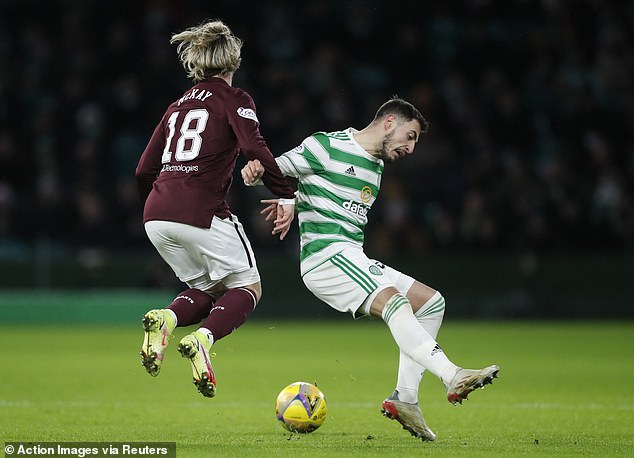 It needed a superb sliding block from Callum McGregor to deny Boyce a clear crack at goal after 67 minutes. For Celtic the final half hour was a nervous affair, the site of dangerman Jota limping pulling up and limping off with 18 minutes to play doing nothing to improve the mindset of an edge home support. Seconds later Welsh made way for Nir Bitton – a central midfielder to fill in at centre-half.

With Ralston, Jota and Welsh all off the pitch and Rogic short of recent games Celtic spent the final stages with a treatment room struggling to maintain social distancing. In midfield the hone team were running on empty, Hearts forcing one corner after another.

With Hearts going for an equaliser and Celtic trying to pick them off on the break the end to the game was breathtaking stuff.

With six minutes to play the home side blew a glorious chance to kill the game stone dead. Kyogo Furuhashi put James Forrest in on goal. Not for the first Craig Gordon produced a wonderful save to deny his old club. For all their possession and menace Hearts couldn’t ask the same questions of Joe Hart. At time up Celtic’s relief and jubilation told its own tale.