Somewhere between the Czech Republic and Glasgow late last week, something definitely clicked into place for Ange Postecoglou’s Celtic side.

The Australian’s project in the East End of the city remains a work in progress and, doubtless, will continue to do so for some time to come.

But after struggling to detect tangible evidence of where this was all going in the early weeks of their new manager’s tenure, the Parkhead supporters are now seeing clear patterns emerging. 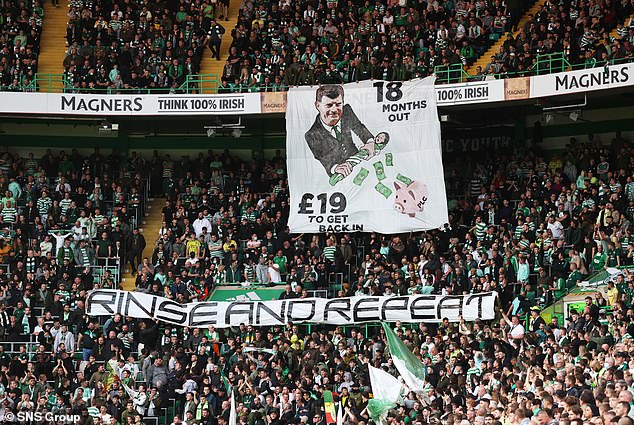 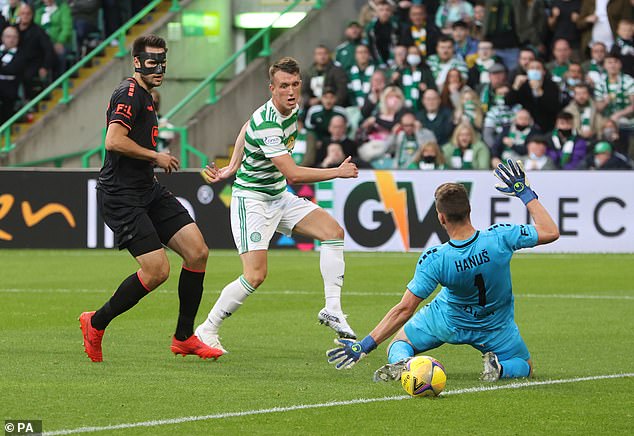 There is a growing sense that Postecoglou’s tactical demands have been taken on board and are now taking root. European football until Christmas has at least been secured.

If it’s blindingly obvious that it will take much time and several fresh faces for the side to evolve in a manner of the manager’s liking, he will be comforted by the buy-in that his players and supporters demonstrated here.

Those who took their seats in the stadium last night, many for the first time in 17 months, are all strapped in for the ride.

AK Alkmaar, who Celtic now face in the playoff round will be a step up in class but nor will they be viewed as an insurmountable obstacle.

The Dutch only play their first competitive game this weekend and will need to find their feet quickly to deny a Celtic team that’s now in the ascendancy.

Postecoglou said prior to this match that the he hoped that this would be one of those occasions in his career that he’d remember fondly once retired on a Greek island and he could scarcely have wished for it to go better. 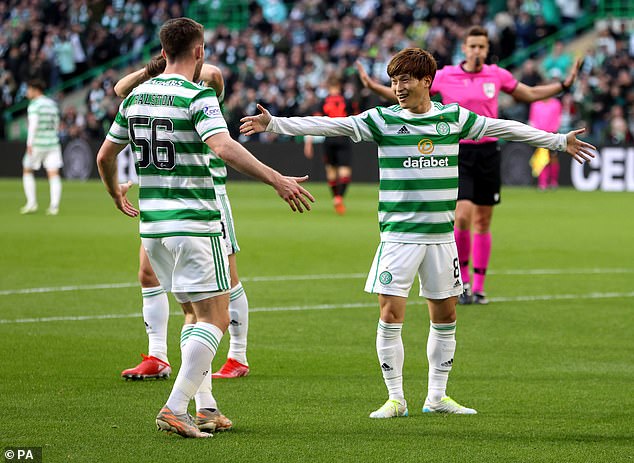 Kyogo Furuhashi is left unimpressed after scoring another, only to see it disallowed for offside 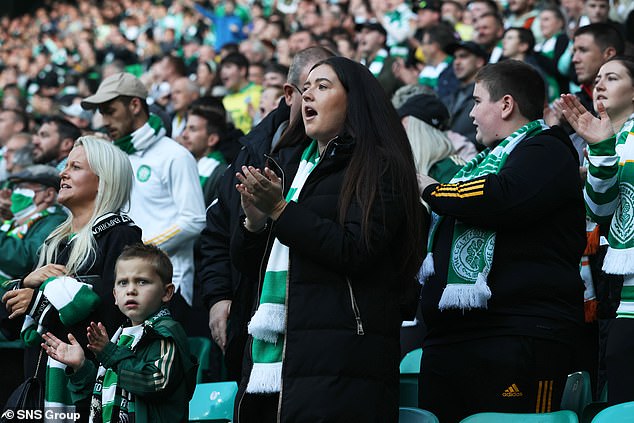 The same applied to David Turnbull who garlanded a superb midfield display with two goals.

Having struggled to create openings in the early days of the season, Celtic now have managed 13 in three matches.

Just as pleasing for Postecoglou will be the second successive clean sheet which came courtesy of two outstanding saves by Joe Hart in the second half.

All in all, it was an impressive night work for the Australian’s fledgling side and you sense that there’s much more to come.

With Liel Abada nursing a minor injury, Postecoglou played Ryan Christie on the left, Forrest on the right and Tom Rogic – the attacking trio tasked with proving the ammunition for the club’s new hero Kyogo Furuhashi. 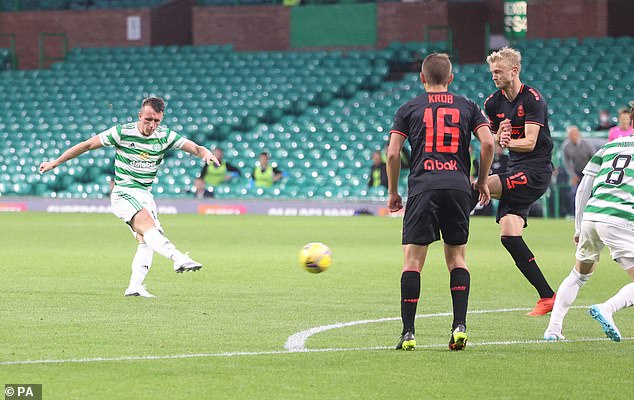 Although still short of capacity on the instructions of Uefa, Celtic Park crackled with expectation.

Any lingering doubt as to the outcome could have been extinguished within 35 seconds.

Rogic’s pass pierced the Czech’s high line. Perhaps spooked by the chance to score his fifth goal in Celtic colours, the Japanese’ composure deserted him. Unable to get the ball under control, he allowed Jan Hanus to dash from his line and block with his legs.

If there’s going to be a price to pay for the high-pressing, high-energy passing game that Postecoglou is implementing, it’s likely to be a few heart in mouth moments in defence.

Callum McGregor, last night’s quarter-back, has to show nerves of steel at times when dropping deep to link the play. The reality is that better sides than Jablonec may have capitalised.

Postecoglou will hope, though, that by the time tougher challenges arrive, his side will be in better shape too. 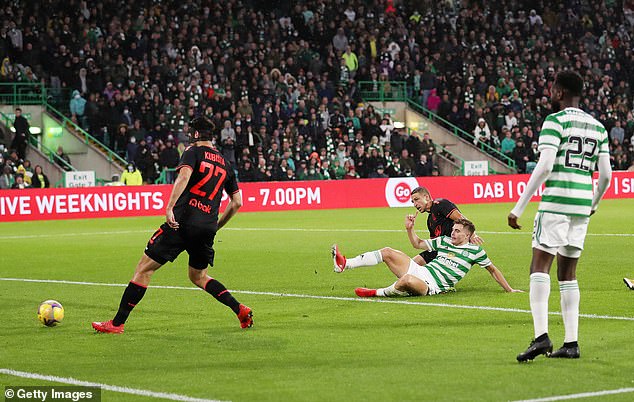 There was still much to admire about the way they went at Jablonec here. With Furuhashi a man in perpetual motion, Rogic and Turnbull took turns to laser passes into his path.

With Forrest and Christie bounding down the flanks and the full-backs, Anthony Ralston and Greg Taylor, driving into the central area, the Czechs must have felt like a swarm of wasps was after them.

The opening goal had been coming for 26 minutes and owed everything to Taylor. Stepping into the play, he rode a couple of tackles and played a disguised pass to Turnbull.

The midfielder made a decent chance look ridiculously easy, flashing the ball past Hanus with the outside of his right foot.

It was a reward for Celtic’s patience. Stephen Welsh had already twice headed narrowly over, Turnbull had seen a fierce shot saved while Furuhashi’s moment of redemption was cut short by an offside flag.

The Japanese has many qualities – none more so than his work rate. Not everything went his way here. But his willingness to dust himself down and go again never ceased.

His dancing feet almost brought Celtic their second goal before the break. Having shifting the ball from one peg to the next and back again, his low strike looked net bound until Milos Kratochvil threw out a leg. The Czech was soon booked for a brutal hack on Turnbull.

With McGregor really the only defensive midfielder, Celtic left themselves open but there was much more defensive assurance than witnessed a week ago.

The sum total of the Czechs’ chances in the first half was a sniff for Kratochvil which Carl Starfelt smothered and David Houska’s low drive into Joe Hart’s waiting arms.

Requiring three goals in the second half to progress, Jablonec predictably came back out swinging. Jakub Povazanec’s curling effort briefly worried Hart but the ball drifted over. 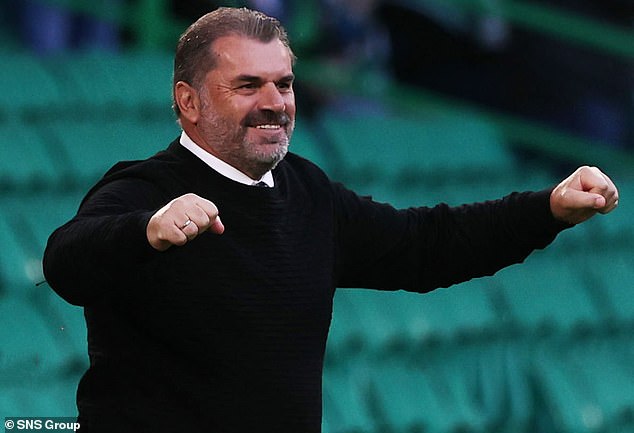 The issue was soon settled. McGregor had prodded and probed all night and one simple cross field pass to Turnbull exposed Jablonec’s back-line. Turnbull shifted the ball from his left to right foot and hammered the ball low beyond Hanus from 20 yards.

The raucous atmosphere was reduced to a hush when Hanus clattered into Furuhashi but the din was restored when the striker rose to his feet apparently unharmed. Odsonne Edouard was sprung from the bench in any event.

The tie may have been over but a second consecutive clean sheet was still a big prize.

Twice in quick succession Hart denied Jablonec when he had no right to do so.

Martin Dolezal’s attempt to capitalise on a rare McGregor error saw the former Tottenham man punch the ball into the sky. Within seconds, Kratochvil’s meaty drive was met with the same fate. The crowd roared its approval.

Edouard looked more lively than he has done in his brief cameo appearance. He would have scored had Hanus not half-blocked his effort but Forrest capitalised on the loose ball to ram home the third.

It was the cue for Albian Ajeti, Ismaila Soro, Adam Montgomery and Nir Bitton to get a taste of the action. Postecoglou now had more headaches of the right kind.