Home » Soccer » Celtic vs Rangers: Fences put up around Celtic Park ahead of Old Firm game on March 21

Celtic have erected fences around their stadium ahead of the Scottish Premiership game with rivals Rangers on March 21.

The Hoops’ failure to defeat Dundee United on Sunday ensured Rangers won the title for the first time in a decade, with their next match coming in the Old Firm game – live on Sky Sports.

In a statement released on Friday, Celtic confirmed they have “already taken steps to enhance security and protection of our property at Celtic Park”, which includes statues around the stadium, including that of former captain Billy McNeill.

They will also enter into discussions with relevant authorities ahead of the game as all parties look to avoid a repeat of the scenes outside Ibrox and in George Square in central Glasgow last weekend which saw some celebrating Rangers fans failing to adhere to coronavirus social distancing measures.

“Celtic FC can confirm that the Club will participate in a multi-agency meeting to discuss preparations for our match on March 21,” they said in a statement.

“The Scottish Government has already made clear to Celtic that it does not in any way associate the scenes last weekend with Celtic or our supporters.

“The Club has been clear in our messaging to our supporters of the importance of staying at home in line with applicable guidance throughout the pandemic. 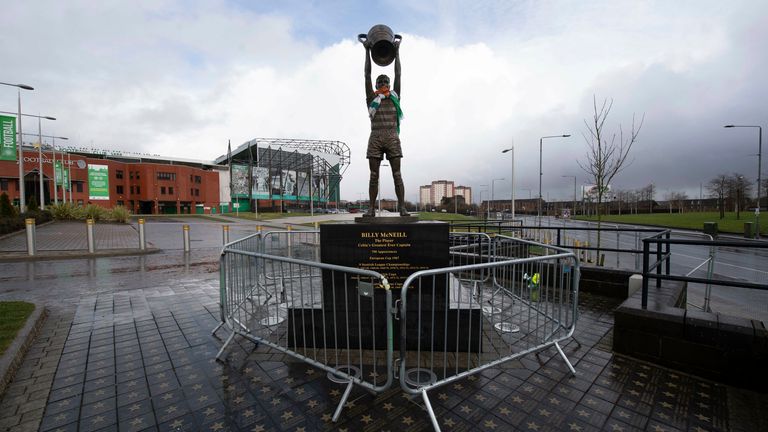 “We have communicated regularly around our fixtures and our supporters have worked with the Club responsibly – the celebrations after our historic nine in row title triumph last summer and after our unprecedented quadruple treble Scottish Cup win in December are two key examples of that.

“We will re-emphasise that message for this fixture as we have done during the season and we are sure that our supporters will work with the Club while the restrictions remain in place.

“Given the damage caused to Club property recently, the Club has already taken steps to enhance security and protection of our property at Celtic Park and the Club is happy to work with those attending the meeting to ensure that any additional protection necessary will be in place for the match in question.”

The SFA have announced that experienced match official Willie Collum will referee the Celtic vs Rangers game, his first Old Form fixture since the 2019 Betfred Cup final, which saw Celtic claim the silverware after defender Christopher Jullien scored what appeared to be an offside goal in their 1-0 win.

His comments come after Scotland’s First Minister Nicola Sturgeon warned that elite sport in the country could be suspended once again if fans do not adhere to lockdown rules.

“That public health advice is not complicated. It will be that everyone involved in this coalition should be as strong as they can around that guidance.

“That reassurance from each of those bodies, but principally from the individuals, from the football fans – of which I am one – to follow the guidance to stay at home, to celebrate at home, and digitally, and then in the future look forward to being able to celebrate again in a more conventional way.”