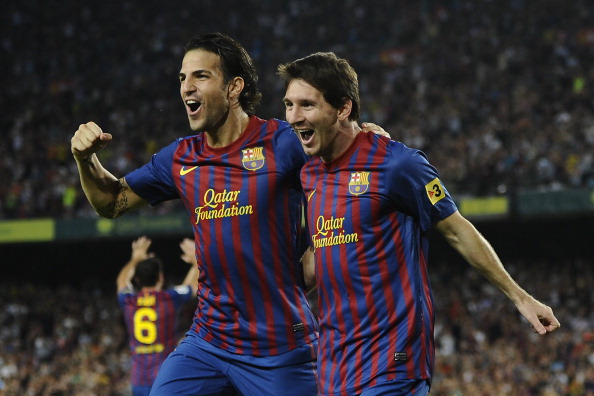 As a lifelong friend and former team-mate, Cesc Fabregas is uniquely placed to vouch for the Lionel Messi effect.

The Spaniard came through Barcelona’s famed La Masia academy with Messi and though he departed for England at the age of 16, Fabregas played alongside the Argentine at the Camp Nou for three years between 2011 and 2014.

It means Fabregas has seen Messi at close quarters and from afar, and he feels the 34-year-old is sometimes oblivious to his impact on the world stage.

‘I think sometimes he doesn’t even realise how big he is,’ said Fabregas.

‘Sometimes he goes to places and he thinks it’s normal for him because he’s been raised like that by being the best and always being surrounded by friends and everything but what he moves around …when you see from the outside it’s something that I’ve never seen before from anyone else.’

Messi may have been somewhat ignorant of his influence in years gone by but even he would have recognised the seismic effect of his brand after the events of the past seven days.

The Argentine’s move to Paris Saint-Germain has sent shockwaves through the football world, bringing previously unseen levels of attention to Ligue 1.

PSG’s owners are hoping Messi’s arrival will end the club’s decade-long pursuit of Champions League glory, but Fabregas says the Argentine will be surprised by the difficulty of Ligue 1.

On the league itself, Fabregas added: ‘The league is a good league, it’s a league that’s improving. It’s already physical, aggressive players in a good way, they defend very well.

‘In attacking, they used to be not very talented but they’re improving. New foreign, modern coaches are coming in and it’s a league that’s going up with the generation of coaches and players.’

Mauricio Pochettino’s side were already overwhelming favourites to win back the title before Messi’s arrival and anything less will be seen as an abject failure.

Fabregas admits his team-mates are already excited at the prospect of coming up against Messi and have even requested for him to ask for the Argentine’s shirt but the Spaniard says his Monaco colleagues must focus on themselves.

‘All the boys are excited, knowing they are playing against Lionel Messi,’ he added.

‘Some of them were dreaming of it. For them it’s a really good thing. They don’t stop asking questions.

‘Everyone wants his shirt, (for when we play them mid-December). I say we are 25 and he will only have two! It’s nice to see the excitement, the will of wanting to compete against the very best, to do well and show their talents.

‘The team is full of young talents at Monaco. It will be a big test for them and will be motivated. When the best player comes, they want to show what they can do.

‘Sometimes it brings more motivation to do well and make something special happen. It will definitely be a tough challenge, though we were close last year. Up until the last two games of the season we were in the mix.

‘We have to keep going not thinking too much about PSG. It’s a long, big season.’

BT Sport is the exclusive home of Ligue 1 football in the UK and Ireland, with around 200 top-flight clashes available to watch this season. For more info, visit btsport.com