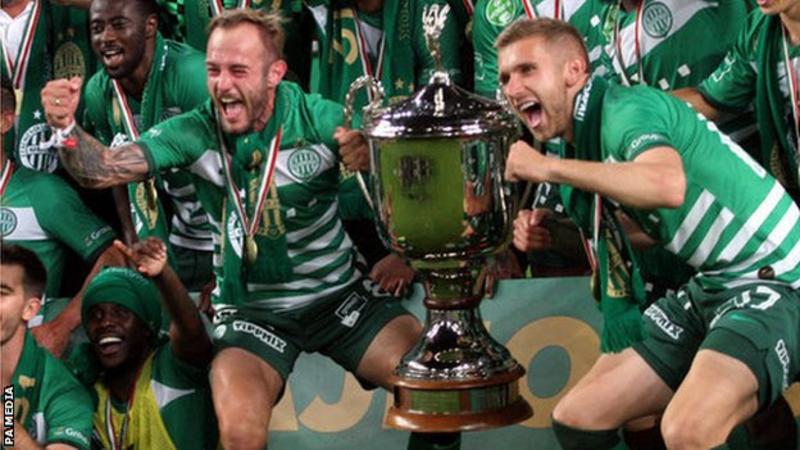 Celtic will face Ferencvaros of Hungary or Djurgarden of Sweden in the Champions League second qualifying round if they defeat KR Reykjavik.

The Scottish champions have been drawn at home for the one-leg tie scheduled for 25/26 August.

Celtic are also at home when they face KR on 18 or 19 August.

It has yet to be confirmed if those ties can be played in Glasgow, although KR told BBC Scotland that they see no problems in travelling to Scotland.

That is despite Icelandic football being suspended at the end of last month because of a spike in Covid-19 cases.

Celtic’s next potential opponents, Ferencvaros, won the Hungarian Nemzeti Bajnoksag I for a 31st time after finishing 13 points ahead of Fehervar last season.

Djurgarden edged out Malmo by a point in the Allsvenskan last year to win their domestic title for a 12th time but sit fourth and trail their rivals by eight points in the 2020 standings.

Northern Irish champions Linfield will face Ararat-Armenia of Armenia or Omonia of Cyprus if they overcome Drita of Kosovo then Legia Warsaw of Poland.

Welsh champions Connah’s Quay Nomads, who first have to beat Sarajevo of Bosnia and Herzegovina, would play either Dynamo Brest of Belarus or Astana of Kazakhstan.

Meanwhile, Republic of Ireland’s Dundalk will face Molde of Norway or KuPS of Finland if they defeat Slovenian side Celje.

Who makes Sportsmail's Bundesliga team of the week?