Report and highlights as Chelsea bounce back from consecutive defeats with a London derby win over West Ham; Thiago Silva’s first-half header and two quickfire goals from Tammy Abraham in the final stages take the Blues to fifth in the Premier League table

Frank Lampard’s side, who had lost their last two in the Premier League, needed to get back on track against their London rivals and Silva’s powerful header on 10 minutes was the ideal start, after Declan Rice had a goal ruled out for offside.

The game descended into an attritional affair short on quality after that dramatic opening, but two sharp finishes from Abraham (78, 80) in two minutes sealed the three points which lift Chelsea above Tottenham, into fifth, while West Ham will spend Christmas in 10th spot.

How Chelsea beat their London rivals…

West Ham did the double over Chelsea last season and thought they had got off to a flyer when Rice raced onto a quick free-kick from Aaron Cresswell and converted brilliantly from a tight angle on seven minutes – but an offside flag confirmed the midfielder had gone just too soon.

Birthday boy Ben Chilwell had turned his ankle moments earlier and was forced off on nine minutes – but despite that setback Chelsea hit the front seconds later, when Silva found some pace to head Mason Mount’s corner home. 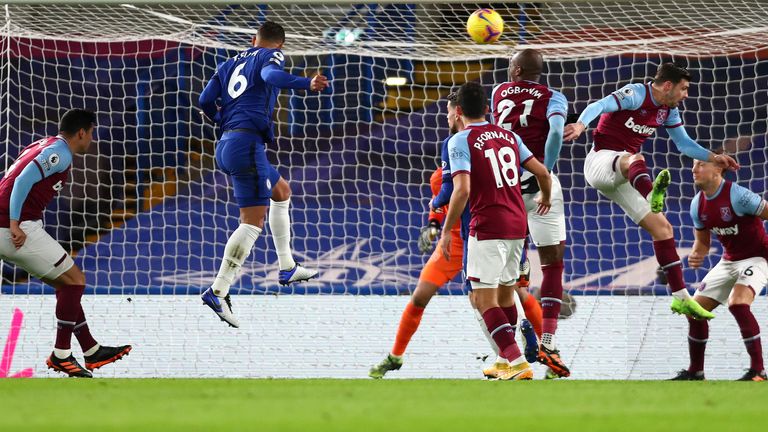 It was the first set-piece goal West Ham had conceded all season but Mount thought he should have had another assist with a cross soon after, when he berated Abraham and Timo Werner for not latching onto his pass through the six-yard box

Abraham did have the ball in the net on 15 minutes, although the ball had clearly gone out of play when Cesar Azpilicueta crossed. There was more debate when Jarrod Bowen hit the net after the whistle had blown at the other end on the half hour, with Silva going down easily as he battled for Tomas Soucek’s flick-on.

Werner should have scored legitimately just before half-time when Christian Pulisic teed him up in the box after a driving run but the Germany forward – who has now gone 10 games without a goal for club and country – shot tamely at Lukasz Fabianski.

Chelsea dominated the early possession in the game but lacked a spark, going 30 minutes without a shot after Silva’s opener in the first half, and Lampard’s team were short on verve after the break, too.

Werner almost met Abraham’s fizzed cross at the start of the second period but with the hosts below par, West Ham took the upper hand and a block from Azpilicueta was crucial to keep out Pablo Fornals just after the hour. The visitors were no more efficient at carving out clear chances, though – they failed to register a single shot on target – and two clinical finishes from Abraham in the final stages took the contest away from them.

The England striker first flicked in Werner’s scuffed shot, before firing home a rebound after Fabianski had blocked Pulisic’s header to secure the win. There could have been more gloss added in the 89th minute but Werner’s close-range shot crashed against the bar, rather summing up his luck in front of goal right now.

Man of the match – Thiago Silva

Chelsea head coach Frank Lampard: “The game was hard. We started really well but in the second half, we didn’t get so much ball, we stopped playing a little bit. I thought the sub Kovacic coming on got us on the ball a lot better in that later period in the game, and then you’re obviously delighted when you get that second and third goal.

“A team like West Ham can hurt you at any moment with a ball in the box or a set-piece. It wasn’t vintage tonight. I thought there were some good parts. The best part for me was the character, having to come off the back of two defeats.”

West Ham boss David Moyes: “I didn’t think we deserved that but we lost three goals so that is the correct score. I think we had chances, we had a lot of the ball. This was a really big test for us and I thought for a long period of it we did quite well, apart from the opening 20 minutes of the game. But the truth was we just didn’t do enough in either box, whether it be defending or finishing.

“We never really worked the goalkeeper but we are playing against a good team. We knew it was a tough game. It was very hard to get any decisions going in our favour. But I have to the praise the players, I thought they did very well with the ball, trying to move the ball well, pass it well. But ultimately the game is about scoring in their goal and keeping it out of our goal and we didn’t do that.”