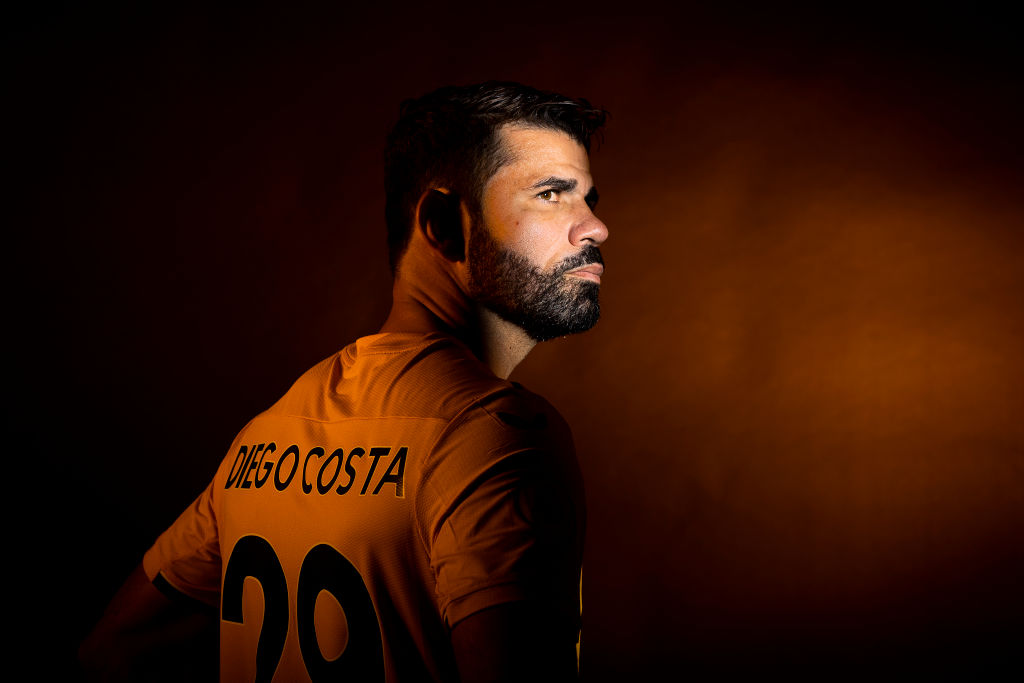 Diego Costa has explained his decision to return to the Premier League after joining Wolves on a free transfer.

The 33-year-old, who scored 59 goals in 120 appearances for Chelsea, has been without a club since leaving Brazilian side Atletico Mineiro in January.

During his spell at Stamford Bridge, Costa won two Premier League titles and the League Cup. He left Chelsea in 2017 following a bust-up with then-Blues manager Antonio Conte.

Costa underwent his Wolves medical last week and signs for the club as cover for new signing Sasa Kalajdziv, who suffered a serious injury on his debut.

‘It’s a first-class club with very good players who know how to play football and having the chance to play in the Premier League again was the main thing,’ Costa said.

‘Obviously, the club influenced my decision, especially knowing I will be able to adapt a lot more easily here not only from a technical point of view, the quality of the players but also from the fact that a lot of the players are Portuguese and that will make my transition that much smoother.

‘It wasn’t in the best terms possible on accounts of a player’s injury which, unfortunately, I can only wish him nothing but the best for him.

‘But when he [Bruno Lage] told me about returning to the Premier League since this a championship I have related to quite a bit, always liked it and followed.

‘No matter how much I enjoyed playing in Madrid, I felt discouraged, but this motivated me. It lit that fire within me.’

The 33-year-old added: ‘I always thought that the Premier League was the best out there, the best in the world.

‘I had the pleasure to play in it, return again and in my opinion, from experience, the league has the atmosphere, the way the game is played, the stadiums full of supporters, the pitch in perfect condition, the respect that players have for each other.

‘I did think if I would be able to do it, if I was physically and mentally ready for this new challenge – a difficult one, that I know for sure – but mentally, I’m fine.

‘On a physical and psychological level, I will need two to three weeks to get back in shape but that’s normal since I haven’t done much for a while but I know that I can do it.

‘If I ever doubted my potential because of what I’ve done – and thank God I’ve had a fulfilling career – and I didn’t have anything left to give, I wouldn’t have accepted this challenge because I have a team to care for and if I said yes to this, it’s because I think that I can bring something to the table.’