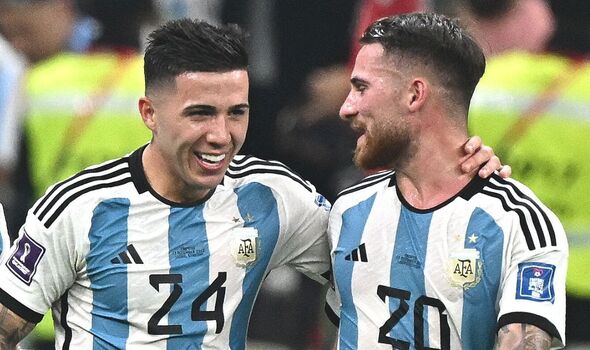 Chelsea are reportedly prepared to launch a move for World Cup winner Alexis Mac Allister should they fail to strike a deal for his Argentina team-mate Enzo Fernandez. The Blues are now accelerating their pursuit of the Benfica starlet, who was named the Young Player of the Tournament in Qatar following a series of spellbinding displays that included a long-range stunner against Mexico.

Fernandez will not come cheap though with Benfica pointing potential suitors towards his £106million release clause.

Speaking in an official club statement, Benfica have already made it public that they will only sell the player if that figure is met as they hope to keep the technician until the end of the season.

But now Chelsea are probing and hoping to agree a deal for the highly-rated 21-year-old amid additional interest from Manchester United, Liverpool and Real Madrid.

However, the Blues seem reluctant to pay Benfica a lump sum in one hit, as they continue to work around the midfield’s hefty release clause.

According to The Times, Chelsea could instead move for Mac Allister, who worked with Graham Potter at Brighton.

The Argentine attacking midfielder was signed by the Seagulls from Argentinos Juniors in January 2019 before he eventually arrived in England one year later to team up with Potter.

Chelsea are seemingly big fans of the world champion, whose stock has skyrocketed following a string of eye-catching displays in Qatar.

Other clubs are also sniffing around including Arsenal, Tottenham, Juventus and Atletico Madrid.

Mac Allister is expected to remain with Brighton until at least the end of the season but the thinking from a Chelsea perspective is that he is far more attainable than Fernandez.

United are understood to be Chelsea’s biggest rivals for Fernandez and they are reportedly preparing a proposal for the 21-year-old.

Fernandez’s agent is in Portugal to hold talks over his client’s future following a successful World Cup campaign with his country.

Meanwhile, Mac Allister recently laid on record his struggles when he first arrived in England – stating he found it tough adapting to Potter’s ways.

“The first year wasn’t easy for me. I found it very hard coming from Argentina with a different language and different way to play football. I physically wasn’t as strong as I am today,” Mac Allister said.

“I wanted to kill him [Potter]… but that’s part of football. He was very helpful — improving my versatility and physicality.

“I’m a much better player today because of it so I can thank him a lot.”

Potter could soon be reunited with his former playmaker if Chelsea are prepared to dip their hands deep into their pockets.