Koulibaly was officially announced as Chelsea’s latest signing on Saturday morning after joining from Napoli for £34 million.

He played 317 games in eight seasons for the Italian club and won the Copa Italia in 2020. 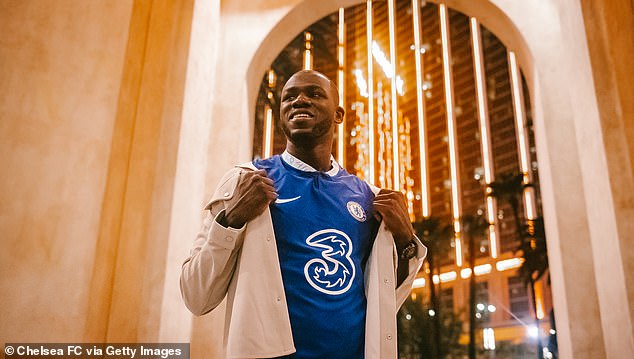 Koulibaly will be a welcome addition for a club that looked short on centre backs after losing Andreas Christensen and Antonio Rudiger.

In Chelsea’s officially unveiling of the 31-year-old, he said: ‘I’m very happy to be here with this team at Chelsea.

‘It’s a big team in the world and my dream was always to play in the Premier League. Chelsea came first to get me in 2016 but we didn’t make it.

‘Now when they came to me I accepted it because they really wanted me to come to the Premier League to play for them.’

Koulibaly is the second big summer signing for Thomas Tuchel after bringing in Raheem Sterling earlier this week.

It leaves Chelsea’s squad in reasonable shape heading in to next season, but they could still do with an out-and-out striker after losing Romelu Lukaku.