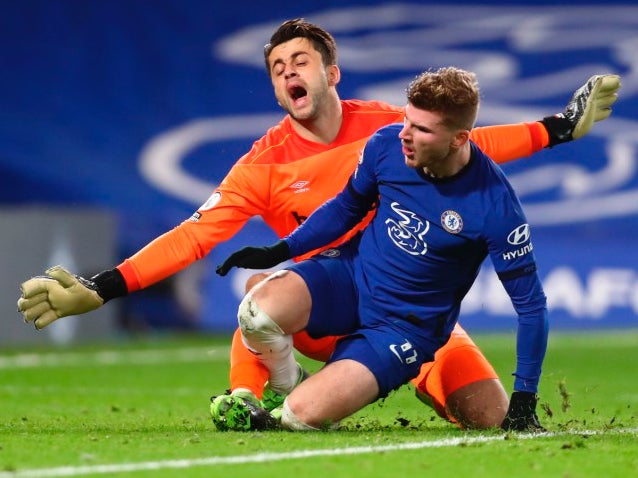 Werner is yet to properly find his feet at Chelsea

Even talk of the floodgates opening has some merit beyond wishful thinking. For all Werner’s goalscoring feats in Germany – 95 goals in 159 games for Leipzig; the fourth most prolific across Europe’s top five leagues in 2019/20 with 29 Bundesliga goals behind Ciro Immobile, Robert Lewandowski and Cristiano Ronaldo – those most familiar with his career recognise a streaky operator who happened upon a prolonged streak.

That might seem reductive, perhaps even unfair on Werner who has an impressive record at a young age. But at a time when he’s not finding the net, that erraticness is a little clearer. He’s not the kind of finisher who has a set routine to convert, more “see ball, hit ball”. That’s not to say he’s a bad one: part of finishing is getting yourself in a position to finish, which he’s clearly good at. But it is the most important part. A bit like how some of the world’s best golfers are average putters.

Depending on how you take your football, these are either theorems, theories or just straight trash. One thing for certain is that though he was off-colour against West Ham, he still had a positive impact on the match, beyond an unintentional assist.

“I’m not worried,” said Lampard on Werner’s cold run. “Every striker will want to be scoring goals, it’s what they ultimately get judged on and that’s why Timo was a great acquisition for us because of the level of goals he’s scored in the last few years.

“He’s a player in a new league and we have to give him time to settle but he’s getting positions regularly, he’s scaring teams and giving them a problem.”

Lampard’s actions back up his words. N’Golo Kante (1,253) is the only Chelsea player who has played more than Werner’s 1,207 Premier League minutes, and that’s not through feeling obliged to play a big-money signing. He offers a unique edge in a Rolodex of high-profile attacking talent.

Rest at some point over the congested Christmas and New Year period feels inevitable and it may benefit Werner to take a break from the scrutiny, especially as it can be sold as justified rotation and at a time when he is used to putting his feet up with Germany’s winter breaks. He has already stated the relentlessness of the schedule has been particularly taxing, and we can assume getting used to a new country stumbling through the Covid-19 with uncertainty has not made adapting any easier.

Then again, it’s hard to end a drought when you’re not playing. And as football powers blusters through the pandemic, no doubt Werner will too.

Now in fifth, with Arsenal on Boxing Day and the chance to finish the festive period closer to the top than mid-table, Chelsea need Werner hitting his new streak as soon as possible.