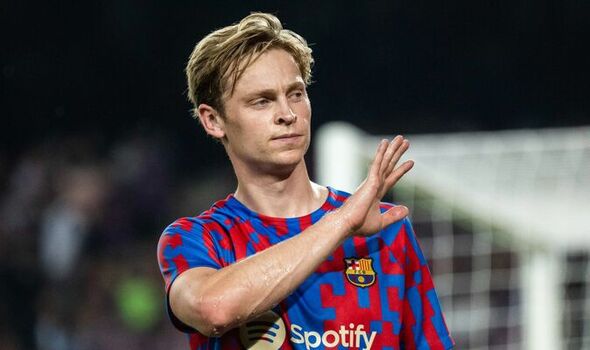 Chelsea have reportedly received indications from Frenkie de Jong’s camp that he would be willing to consider a January move to Stamford Bridge amid growing frustrations at Barcelona. The Dutch midfield maestro was adamant he wanted to remain in Catalonia this summer – despite receiving a number of lucrative proposals from the Premier League.

However, the call has seemingly backfired with De Jong no longer considered to be a staple in Xavi’s first team, meaning a transfer could now be reconsidered.

Although Barcelona have continuously strived to keep the player, it’s clear a sale would help them balance the books as they continue to battle financial turmoil off the field.

According to ESPN, Chelsea, United and even Liverpool are all interested in a move for De Jong and a deal could be explored when the January window opens.

Chelsea, in particular, are believed to have received indications that the 25-year-old would be open to a move to west London in the coming months.

It was previously reported that De Jong would have favoured a move to Chelsea over United last summer due to the luxury of Champions League football – despite an excessive push from Erik ten Hag.

The United boss phoned De Jong on a number of occasions to try and entice him into the move but his former star was determined to fight for his place with Spanish giants Barca.

Ex-Ajax technician De Jong has only started five matches for Barcelona this season and his future could now lie elsewhere.

Despite evident improvement under Xavi, the club are now staring elimination from the Champions League in the face with Bayern Munich and Inter Milan on course to progress from the group of death.

Meanwhile, Chelsea are in the market for another central midfielder after losing World Cup winner N’Golo Kante for four months due to a hamstring injury.

The Frenchman is out of contract at the end of the season while Jorginho is also yet to agree an extension with his deal also due to expire in 2023.

Todd Boehly is said to have a strong professional relationship with HCM Sports Management, who represent De Jong – meaning a transfer could very much be viable.

United had actually agreed on a fee with Barcelona for their top target this summer but the player’s unwillingness to budge saw the transfer collapse despite months of negotiations and talks.

Chelsea are expected to continue their excessive spending in January when head-coach Graham Potter will look to put his own stamp on his talented squad.

Sacked boss Thomas Tuchel was the mastermind behind the club’s £270million summer spending spree before being fired just a matter of days after the transfer window closed.

Yet Chelsea’s interest in De Jong is thought to have been driven by Boehly, who held face-to-face transfer meetings with Barcelona in Catalonia in his first few weeks at the wheel.

A deadline-day deal for Pierre-Emerick Aubameyang was struck between the clubs in the final hours of the window, while Marcos Alonso headed in the other direction back to his homeland.

Chelsea captain Cesar Azpilicueta was also due to sign for Barcelona before eventually extending his stay with the Blues.