Samuel Iling-Junior is reportedly on the verge of leaving Chelsea for Juventus as former Blues boss Maurizio Sarri plots the first of what could be several deals involving his old club. The 16-year-old starlet will become a free agent at the end of the season and is said to have already told Chelsea he wants to leave, triggering interest from around Europe.

Bayern Munich, Ajax and Schalke have all reportedly been monitoring the situation involving Iling-Junior, who Chelsea wished to keep long-term.

However, Goal journalist Romeo Agresti claims Juventus are in the driving seat to secure the starlet’s services.

He says Iling-Junior has been in Turin recently to finalise terms of the transfer, with just the fine details left to be agreed.

The Sun report that Chelsea will receive a small compensation fee once the move goes through and have supposedly accepted the England youth international has had his head turned. 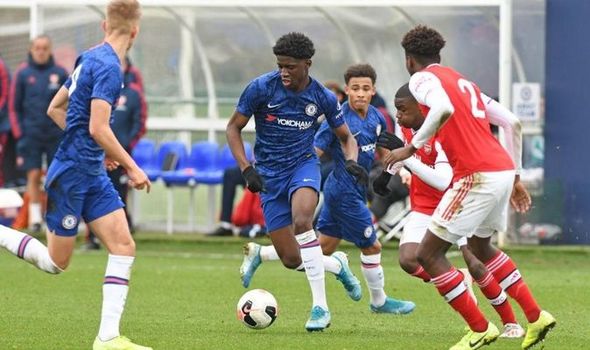 Iling-Junior has made 11 appearances for Chelsea in the Under-18 Premier League this season, while also notching up three outings in the UEFA Youth League.

However, just one assist shows the youngster still has plenty of developing to do if he wants to make it into the Juventus first-team in the near future.

One player more likely to make an immediate impact at the Allianz Stadium is Jorginho, who has long been touted as a likely signing for Sarri this summer.

The Juventus boss is a huge fan of Jorginho and appears desperate to reunite with the 28-year-old, having managed him at Napoli before signing the Italian international for Chelsea in 2018.

Jorginho had a tough debut campaign in the Premier League and was often a scapegoat for fans who were disgruntled with Sarri’s style of football.

The playmaker won over the majority of support with some strong performances under Frank Lampard this term, although he found game time difficult to come by after lockdown and has only returned to the starting XI recently due to N’Golo Kante’s injury.

Chelsea paid £57million for Jorginho and are unwilling to accept a big loss on their investment, supposedly disregarding any bids below £45m.

This has proved problematic for Juventus, who had been keen on including the likes of Miralem Pjanic, Aaron Ramsey, Alex Sandro or Federico Bernardeschi in a swap deal.

Pjanic is said to have turned down a move and will now head to Barcelona in exchange for Arthur, while Chelsea were not interested on the Bosnian anyway.

Juventus will therefore have to try and produce a more enticing package to persuade Chelsea to sell, although they might have more luck signing Emerson Palmieri.

The left-back looks certain to leave Stamford Bridge this summer and would only cost around £27m, although another former Chelsea manager in the shape of Inter Milan boss Antonio Conte is also monitoring the situation.

Ramos 'has until the end of March to sign contract extension'

‘I want my Socceroo shirt back’: Juric here to stake his claim