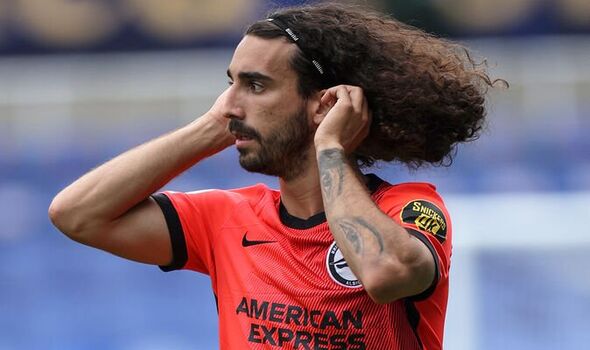 Chelsea have taken a clear dig at Brighton in their announcement of Marc Cucurella as a Blues player. Chelsea tweeted that they had bought the Spaniard but there was a sense of familiarity to the post.

A fee was agreed between the two clubs earlier this week. And now the £62million deal has been finalised.

Brighton responded to reports on Wednesday that a deal had not been agreed with any club for the 24-year-old. The Seagulls posted a statement on their official Twitter account.

“It read: “CLUB STATEMENT: MARC CUCURELLA. Contrary to inaccurate reports from numerous media outlets this evening, no agreement has been reached with any club to sell Marc Cucurella.”

But less than 48 hours later, Cucurella has been announced as a Chelsea player. And the west London club confirmed his arrival in style, clearly taking aim at Brighton’s post.

The official Blues Twitter account wrote: “CLUB STATEMENT: MARC CUCURELLA. Following reports from numerous media outlets this week, we can confirm an agreement has been reached with Brighton and Hove Albion for the signing of Marc Cucurella.”

Chelsea then followed that with a picture of Cucurella in the club’s dressing room. Thomas Tuchel was in a race against time to get the deal done by midday on Friday in order for the player to be available for Saturday’s season-opener against Everton.

But it appears a deal was done in time. Chelsea hinted Cucurella will be available at Goodison Park, placing one of the club’s away shirts with his name on the back in the picture of the dressing room.

On signing for Chelsea, Cucurella said: “I’m really happy. It’s a big opportunity for me to join one of the best clubs in the world and I’m going to work hard to be happy here and help the team.”