For his first competitive appearance in four weeks, star attacker Kai Havertz certainly made an impression for Bayer Leverkusen against Rangers. Whether you take a positive or negative slant on his display though, probably depends on your allegiance.

On an evening where the Germans strode comfortably into the Europa League quarter-finals, via Moussa Diaby’s solitary second-half strike, the Chelsea target was heavily involved in every notable opportunity in the first-half, operating in a broadly free role on the right.

All that was missing, significantly, was the finishing touch. An ambitious whistling volley caught the woodwork early on, yet two one-on-one situations either side of half-time failed to result in a goal: one skewed wide, one straight at Gers keeper Allan McGregor. Both on his favoured left-foot – and both should have been converted. 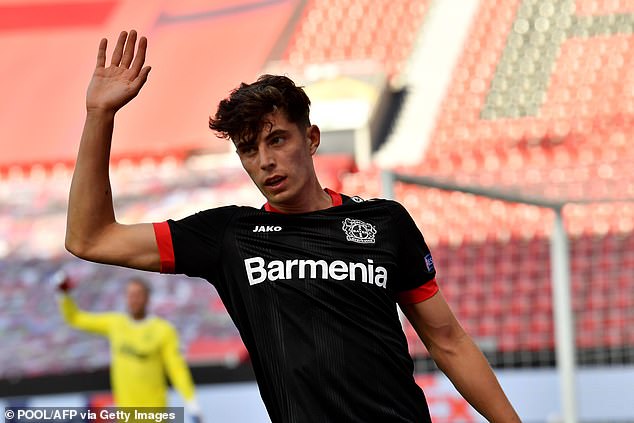 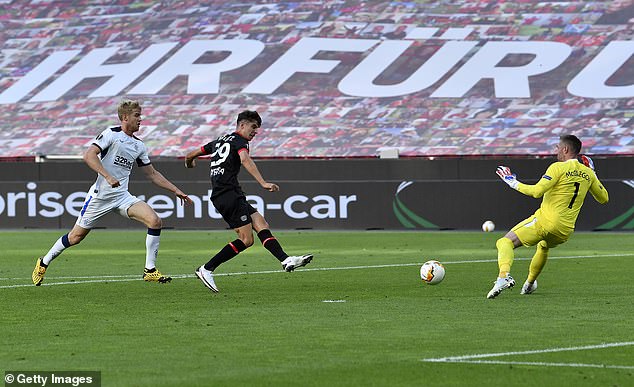 Yet in fairness, that is not in keeping with Havertz’s form over the course of the 2019-20 season. He’s scored 17 goals operating in a attacking midfield role this season, including five goals in four matches post-lockdown.

But tonight, in a match with a distinct pre-season feel to it – Leverkusen have just finished their season whilst Rangers have just started their new campaign – the 21-year-old picked his moments to come alive.

Positioned wide-right in an attacking trio behind central striker Kevin Volland, his first-half consisted mostly of neat first-time lay-offs for his team-mates and naturally cutting in on his left-foot with his back to goal.

The final third was where Havertz selectively expanded his energy, with a burst of acceleration often taking Rangers’ back-line by surprise. Nimble and agile, his close control of the ball in tight spaces meant he very rarely lost possession throughout the course of the evening.

Yet after a largely anonymous opening 15 minutes, the playmaker come alive. With the ball perfectly set up for him just inside the box to the right, he struck a fizzing left-footed volley goal-bound. Yet with McGregor beaten, the ball grazed the crossbar. 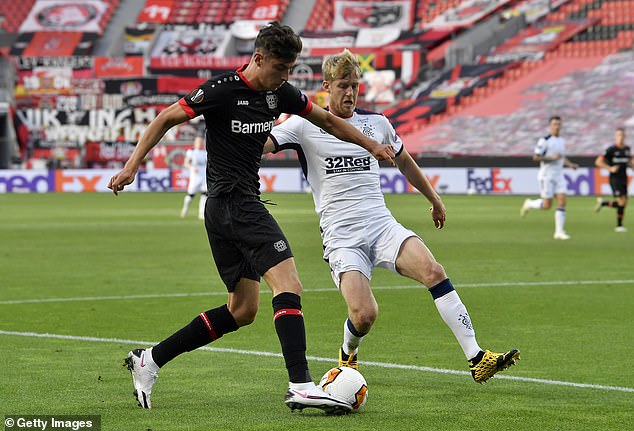 Havertz came alive midway through the first-half, but could not give his side the lead

But a far easier chance presented itself six minutes later. After a perfectly timed run beat the offside trap, Havertz was one-on-one with McGregor. Bearing down on goal, a net ripple was imminent. But no? To the bemusement of everyone in the BayArena, not least himself, he pulled his shot wide of the far-post.

A massive opportunity squandered – the sort of chance which doesn’t come around all too often in the high-stakes tension and drama of the Premier League.

Not undeterred though, he almost made amends with an exquisite ball over the top to Diaby just before half-time, yet the midfielder couldn’t control his skywards volley.

After the break, with the game increasingly stretched as Rangers pushed gallantly for a goal to claw back the tie, space opened up. 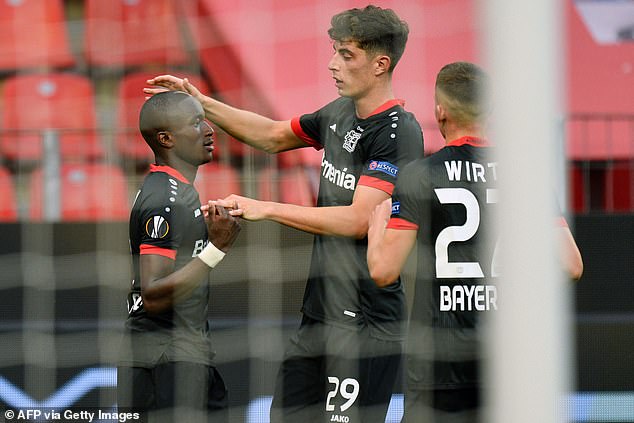 Diaby gave Leverkusen the lead and three minutes later, Havertz was played through on goal again. This time he hit the target, but struck straight at McGregor’s legs, who prodded the ball away rather comfortably.

Then, as substitutions broke up the rhythm of the game and Rangers pressed intensely as they searched for three goals in half-an-hour, Havertz went missing somewhat – bar a late effort into the side-netting with no angle to play with.

To cut him some slack, perhaps understandably, fatigue caught up with a young talisman who has already played 43 matches this season. 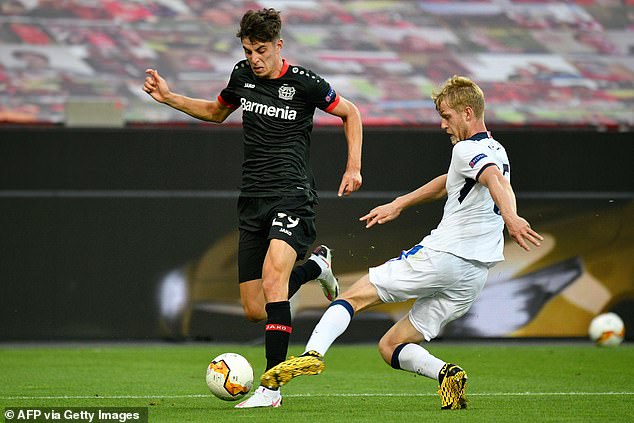 The 21-year-old lacked influence as the second-half wore on, perhaps impacted by fatigue

But was does this mean for Chelsea fans? Perhaps the most noteworthy point is the result itself. With Bayer insistent that Havertz won’t be departing until their European journey is over this season, their victory in the tie means no potential deal will be completed over the next few days.

Leverkusen move on to the last-eight, and a mouthwatering clash against Inter Milan on neutral territory in Dusseldorf on Monday night. That will tell us more about Havertz. Yet this did tell us something: for all the talk, whether it be rustiness or not, his first European game back was certainly a story of two steps forward, one step back.

The talent is evidently there, but should a mega-money deal go through this summer, Frank Lampard will certainly have some work to do.