The Senegalese’s header just after half-time saw the Reds profit from Christensen putting the Blues down to 10 men with a foul on the Reds’ No 10.

Jorginho then missed from the spot thanks to Alisson’s fine stop following Thiago Alcantara bringing down Timo Werner in the box on his debut.

Here are the player ratings from Stamford Bridge.

Kepa Arrizabalaga – 5. Early wanderlust almost saw him embarrassed after Salah beat him to a loose ball. Slow passing out did embarrass him as Mane closed him down to score. Did make several good aerial claims and a couple of saves.

Reece James – 6. Was as diligent as he could be defensively, but faced a constant onslaught of Mane, Robertson and Firmino. Couldn’t get forward too often, especially second half.

Andreas Christensen – 6. Had been relatively solid prior to the break but pulled down Sadio Mane on the counter and was shown a red card after a VAR review.

Kurt Zouma – 6. Some excellent clearing headers off set pieces and crosses. Did as much as could be expected against the constant pressure after the break.

Marcos Alonso – 5. Didn’t get forward too much early on, or at all in the second half. Did well against Salah’s runs down the flank.

Jorginho – 3. Bit of a bystander in the first half and the game utterly passed him by thereafter. Took the penalty his team badly needed to get back in the game – and saw it saved.

N’Golo Kante – 7. Chelsea’s best player in the first half, both for pressing the away side’s midfield and for driving runs upfield in support of the front line. Important in ball-winning in front of his own defence.

Mateo Kovacic – 7. Neat and quick on the ball, always available in support of his team-mates, though we didn’t see too many of his surging runs forward. Overworked along with Kante in the second 45.

Mason Mount – 6. Tireless worker but little link-up play in attack first half. Ended up left midfield as a blocker.

Kai Havertz – 5. Played a deep centre-forward’s role but again struggled to get too heavily involved. Subbed at half-time.

Timo Werner – 6. One half-chance rolled wide. Lots of moments where he threatened to race away behind the defensive line, but the pass didn’t come or he was tackled. 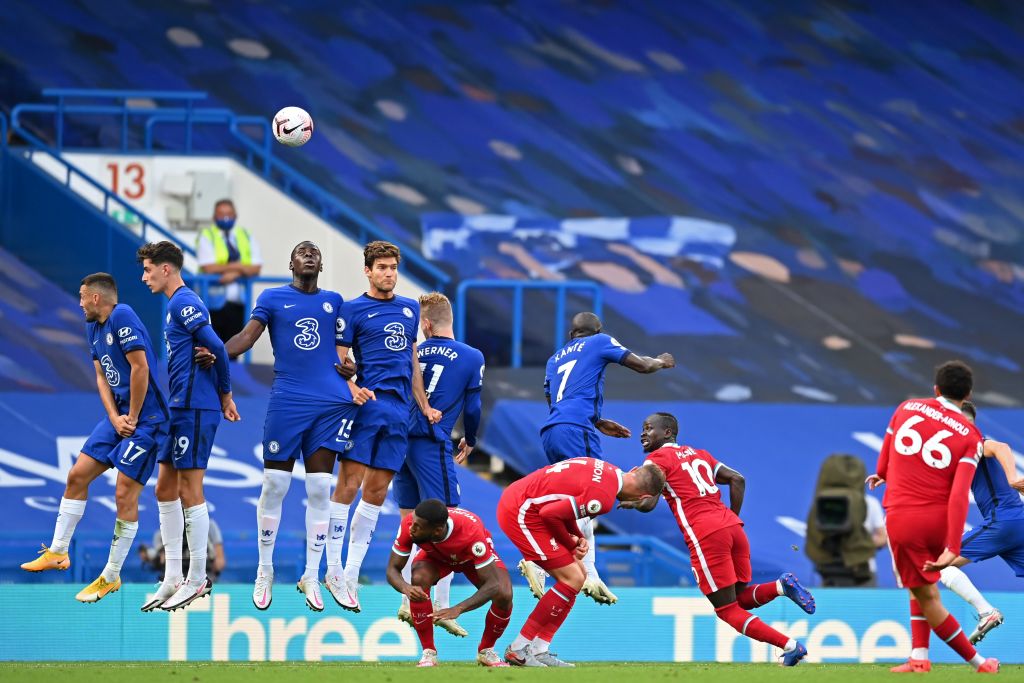 Alisson Becker – 7. Largely untroubled in the first half. Cleared up the few through passes he had to deal with and saved Jorginho’s penalty.

Trent Alexander-Arnold – 6. A quiet game by his standards, but good on-the-ball passing and deliveries when he had the chance.

Virgil van Dijk – 7. Could hear him ordering his team-mates around all game long. Barely had a defensive duel to worry about for most of the match.

Jordan Henderson – 7. Quick to help his team recover possession and play forward. Subbed at the break with an injury.

Naby Keita – 7. Good in terms of driving forward and quickly linking play. His usual industrious performance when Chelsea were on the ball.

Gini Wijnaldum – 6. Helped dominate the centre of the park without ever really linking with the front three.

Mohamed Salah – 7. Showed clever touches and lots of intent to get inside the full-back and create danger, though his only first-half shot was blocked.

Roberto Firmino – 7. The usual effort and endeavour to go with his movement, though didn’t create a lot for himself or others.

Sadio Mane – 9. His movement off the ball was a real issue for Chelsea all game long; in the first half he won the free-kick which led to the red card, then after the break hit a quickfire brace to win the points for Liverpool.

Liverpool injury crisis: How will Jurgen Klopp's side cope against league leaders Leicester?