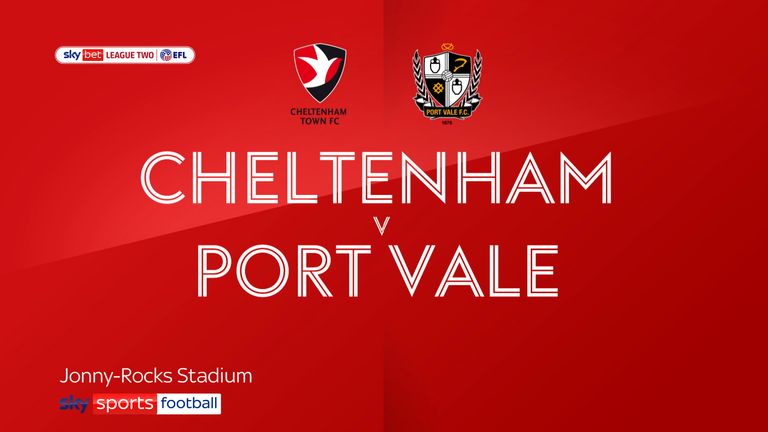 Cheltenham survived a late rally to see out a 3-2 Sky Bet League Two win over Port Vale having led by three seven minutes from time.

The Robins were seemingly coasting after strikes from Alfie May, Liam Sercombe and a Scott Brown own goal before Vale hit back through Will Swan and Alex Hurst but could not find an equaliser.

A mix up between Vale’s former Town keeper Brown and defender Zak Mills saw May nip in between and net from Matt Blair’s hopeful nudge forward in the 15th minute.

The lead was doubled in the 18th minute when Chris Hussey’s swinging cross from the left was kept alive by Blair for May to thunder against the underside of the bar, against the back of Brown’s arm and into the net.

The rest of the game was scrappy and seemed over when Cheltenham substitute Sercombe’s half volley into the ground crept into the top corner via a kiss off the underside of the bar in the 76th minute.

Vale substitute Swan threw the cat amongst the pigeons by netting at the second attempt, following up on a fine point-blank stop by Cheltenham keeper Josh Griffiths with seven minutes to go.

The gap was cut to one when Swan centred from the left for Theo Robinson to draw another point-blank save from Griffiths only for Hurst to tuck into the gaping net in the 85th minute.

But Cheltenham survived seven minutes of added time with Griffiths tipping wide a daisy cutter from Luke Joyce way beyond the clock striking 90.

Dybala transfer a possibility this summer after Juventus contract declaration