Captain Scott Jamieson's family leave means that Melbourne City will have to juggle the backline that kept reigning champions and Premiers Plate winner Sydney goalless when City returned to action with a 2-0 win over Steve Corica's side on August 1.

City take on Adelaide United in a tantalising clash on Tuesday evening with much at stake for both sides.

Adelaide need to win to keep their finals hopes alive. A loss will open the door for Western United to pass them, while a win would see them leapfrog Perth Glory into fifth spot on the table and put more pressure on Western and Glory.

Veteran coach Erick Mombaerts would like to have Jamieson, whose wife is expecting their first child, back but is confident that the two contenders for the job, Scott Galloway and Nathaniel Atkinson, will fill in with few problems. 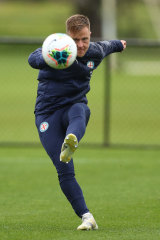 City skipper Scott Jamieson may be on personal leave for the remainder of the season. Credit:Getty Images

Galloway, a left back by trade, did play in the opening games of the season while Atkinson is a right back, who has played in other positions.

"We have everybody fit … we have done good training session also. We have practised with the two options. We anticipated a long time ago that Jamo has to leave, so it is not a surprise," Mombaerts said on Monday.

The Frenchman is not confident that his skipper will be back soon.

"I don't know if it's possible, he has to be in quarantine. We don't know exactly," he said.

"I know that as he is a good captain he wants to join us if he has a chance to play but I don't know if it's possible at the moment."

If City secures second spot, their semi-final will be on August 25 or 26, which leaves Jamieson with little time to do his two weeks quarantine and play.

It is more likely that he would be available for the grand final on August 30, should City make it and if Mombaerts was prepared to change a line-up that would, in that case, have won a semi-final.