Chelsea star Conor Gallagher suffered an embarrassing moment during a pre-season clash with Charlotte FC on Thursday morning, trying a tame penalty which rolled straight into the arms of the goalkeeper and drew laughter from a TV commentator. To make matters worse, Thomas Tuchel’s side lost the shootout 5-3 as the competitive season edges closer.

Gallagher is under pressure to impress with the likes of Jorginho, N’Golo Kante and Mateo Kovacic already vying for minutes in Chelsea’s midfield. The 22-year-old dazzled on loan at Crystal Palace last season, and is intent on forcing his way into Tuchel’s midfield plans.

He was among 10 substitutes to emerge from the bench against Charlotte FC, in a game Chelsea were winning thanks to a first-half goal from Christian Pulisic. But Daniel Rios’ 92nd-minute penalty introduced the need for a shootout, and despite the Blues’ world-class talent, they didn’t come out on top.

That’s partly thanks to Gallagher’s woeful spot-kick, with which he candidly tried to outfox the keeper by dinking it down with middle with hardly any power. Pablo Sisniega calmly crouched down to pick up the ball, drawing laughter from Brazilian TV commentary and leaving the Englishman red-faced. 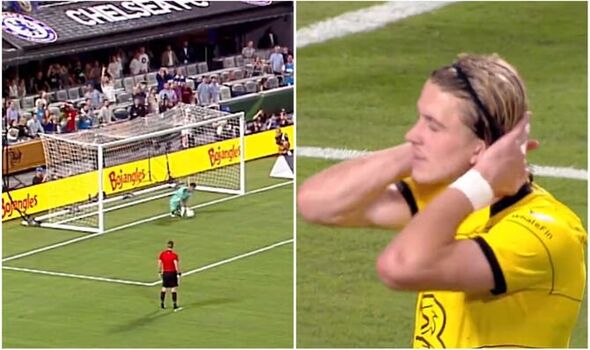 It was otherwise another match of intrigue for Tuchel and the club’s fans, with Raheem Sterling making his non-competitive debut and a host of highly-rated youngsters getting another chance to impress. Gallagher just about fits into that category, and has never hidden his desire to break into Chelsea’s first-team rather than pursue interest from other clubs.

“I feel ready for a step up in my career,” Gallagher told The Daily Mail last week. “If there is a chance to be a part of the team at Chelsea then I can’t turn it down. I’ve got to have belief in myself that I can show the fans and the boss what I can do.”

Man United slapped with £6,000 fine by UEFA after five bookings