‘Coaches are crazy and I might be one of the craziest’: Brighton boss Roberto de Zerbi opens up on his obsession with football, his admiration for Marcelo Bielsa and how he spent five days sheltering in a Ukrainian bunker from artillery fire by Russia

Roberto de Zerbi has been talking about principles. About the time when he refused to leave Kyiv until his Brazilian players and their young families had secured a safe passage out of the besieged Ukrainian capital.

And about how he declined the Bologna job before joining Brighton, because he did not feel comfortable replacing Sinisa Mihajlovic, a coach who had been sacked as he fought leukaemia.

‘I don’t want to be a teacher of life,’ says De Zerbi. ‘But I have rules I don’t compromise. One of the most important is that before the coach there is the man and you can only arrive at a high level of play if there is a connection, respect, confidence between me and my players. You have to be honest, clear. 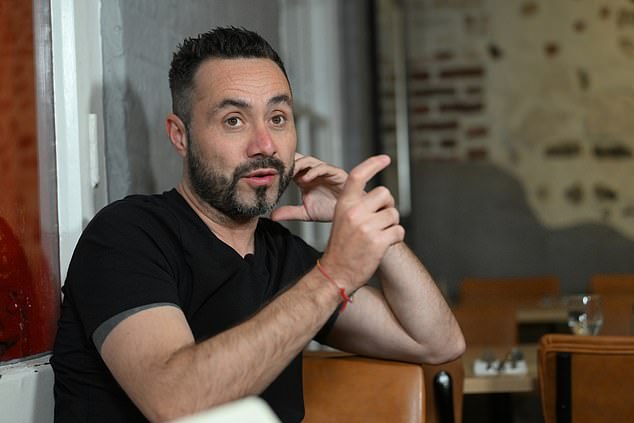 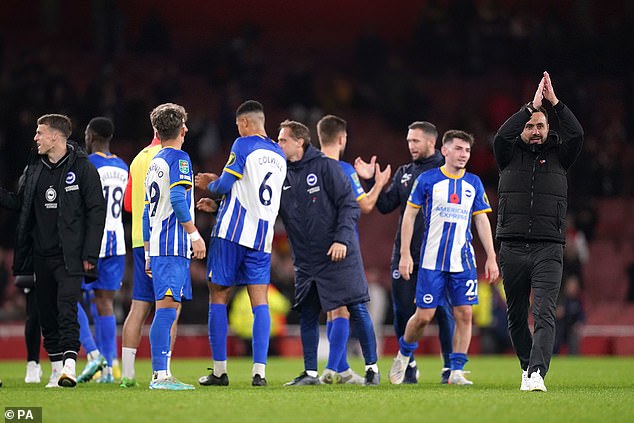 ‘I don’t want people to think I am a super hero. I am human. I can make mistakes in the dressing room. But I say sorry. When one player plays less than another and when I decide one player has to leave. But this is my work.’

With an amusing tale to prove his fallibility, De Zerbi, 43, rewinds to the dressing room at Arsenal on Wednesday when his Brighton team toppled the league leaders at the Emirates, securing a ticket for the last 16 of the Carabao Cup.

‘A mistake? The last one?’ he says, climbing to his feet to recreate the moment with his assistant manager Enrico Venturelli. They are upstairs in Donatello, an Italian restaurant in Brighton, jostling, side by side with eyes fixed on an imaginary ball in the air.

‘I was trying to explain the position I wanted my player to take, to stay strong. I pushed Enrico and boff, he fell over.’

Venturelli interjects: ‘I wasn’t ready, he caught me by surprise.’ They are laughing. ‘That was it finished,’ says De Zerbi. ‘One player was in tears of laughter.’ 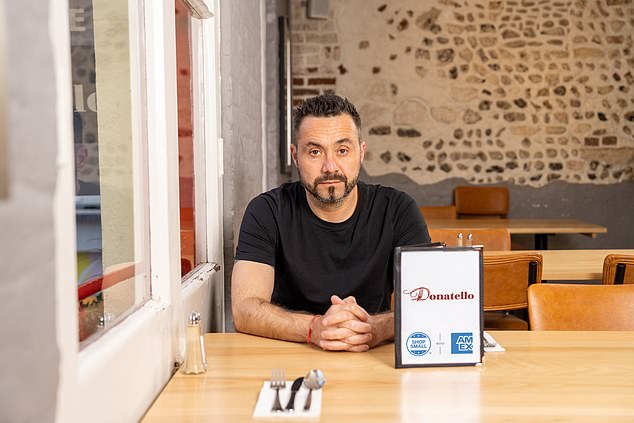 De Zerbi refused to leave Kyiv until his Brazilian players at Shakhtar and their young families escaped the war-torn country, and he spent five days in a bunker sheltering from artillery fire

The vignette provides a glimpse into life at Brighton and the gentle transition since Graham Potter left for Chelsea. There were no great, sweeping changes from the new boss, who has been effusive in his praise of the ‘fantastic work’ by his predecessor.

But gradually, he tweaked a few things and infused the club with his own warm personality. There are plenty of cuddles and laughter. They are winning, which helps.

‘It’s already my team but I chase perfection and perfection doesn’t exist,’ says De Zerbi. ‘So my work is never finished. Many coaches are a bit crazy and I might be one of the craziest.’ Much is made of his relationship with Pep Guardiola. They were pictured together in September for a meal at Guardiola’s restaurant in Manchester. ‘Spanish… good jamon,’ nods De Zerbi.

They discussed Brighton before he accepted the job, and the Manchester City boss lavished praise upon his friend before beating him 3-1 at the Etihad, last month. ‘His impact in England will be massive,’ said Guardiola.

De Zerbi is a disciple of Guardiola’s Cruyffian style. ‘I love to try to win the game with the ball,’ he tells Sportsmail. ‘I love when my team keep the ball, try to lead the game and my players show their quality. I love the winger who tries to beat his man. I love those players who live between the lines. I love the centre back who tries to command the play.’

But De Zerbi likens his own obsessive nature more closely to that of Marcelo Bielsa, the former Leeds boss and another coaching mentor, who invited him to spend a week studying his methods when at French side Lille, in 2017. 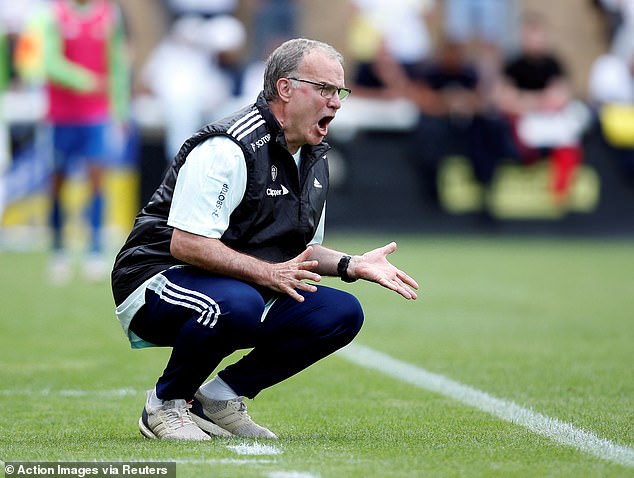 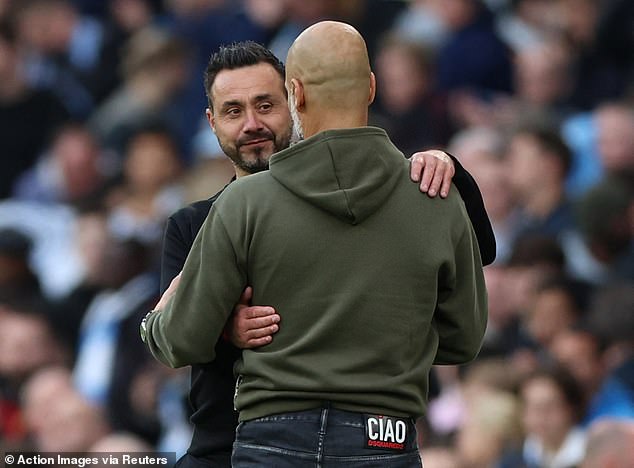 ‘As a person he is one of the best I’ve known in my life in football,’ says De Zerbi of Bielsa. ‘A big coach who gave this possibility to a young coach and talked to me as if I was Louis van Gaal or Jose Mourinho. 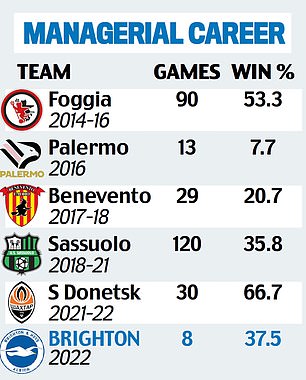 ‘I always had passion but I watched him and appreciated his work. Bielsa lives for his work, very close to an obsession. Me too.’

It was an obsession interrupted earlier this year by Russia’s assault on Ukraine. De Zerbi, manager of Shakhtar Donetsk, spent five days sheltering from artillery fire in a bunker beneath the Opera Hotel in Kyiv, refusing to leave until his Brazilian players and their families were safely out of the country.

‘In these days, I had only an obsession to help my Brazilian players,’ he recalls. ‘You think war is far from here, is impossible but when you have been inside you understand it is not.

‘I am sorry for the war, for the Ukrainian people, for my experience with those players. We would have become a fantastic team. The potential was infinite. We could have reached the Champions League quarter-finals.’

When war rendered him jobless there were no shortage of offers. He declined Bologna but agreed to Brighton, aware of the clear parallels to Sassuolo.

‘The style and mentality of the club, many things are close,’ says De Zerbi. ‘Both clubs are very serious. The players are very good but maybe don’t believe in themselves enough. There is a very big potential and I am not afraid to put the goals higher.’ 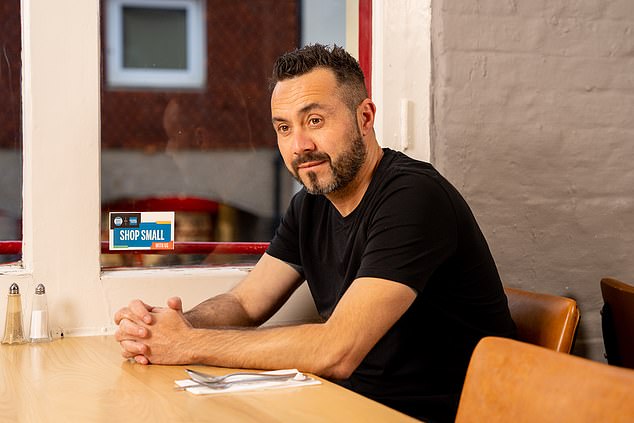 De Zerbi arrived with Brighton in fourth, with 13 points from six games, and took only two points from a difficult first five games including fixtures with Liverpool, City and Tottenham. Then a 4-1 win over Potter’s Chelsea sparked three victories in a row, including the one at Arsenal. Brighton are sixth ahead of playing Aston Villa on Sunday. Still mixing it with the big boys. Ruffling feathers.

It is integral to De Zerbi’s identity just as it always was for Bielsa, and a motivation for him to become one of Italy’s strongest voices against the plans for a European Super League.

‘Football is for the people, the fans,’ he says. ‘I am not just saying this so people will like me On the pitch we are the same. We have the possibility to win against City. Eighty per cent of the time we can lose but the dream is to win. I want this dream.

‘This is football. The possibility for Shakhtar to win the Champions League. When Leicester won the Premier League, it was the best of football. If you close these dreams for the small teams you can close football for me.’

De Zerbi is backing the American Express Shop Small campaign, which encourages the nation to support their high street and enjoy the benefits of shopping small ahead of Small Business Saturday on 3 December. Brighton & Hove Albion sponsor American Express was the founder and remains principal supporter of Small Business Saturday which is celebrating its tenth year in the UK. For more information visit: americanexpress.co.uk/shopsmall