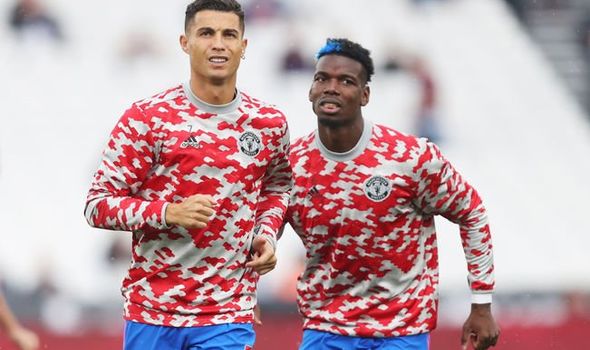 Manchester United fans hailed Cristiano Ronaldo for his actions during the team’s warm-up ahead of their Premier League clash with West Ham. The Portuguese star approached his team-mates clapping his hands and shouting to try and gee them up.

The 36-year-old got a pat on the stomach from skipper Harry Maguire as he joined the group for the warm-up.

The fired-up forward kept shouting as he walked past Luke Shaw and towards Raphael Varane, where he appeared to issue some sort of instruction as the defender nodded his head.

Ronaldo then moved onto Paul Pogba, where he had a quick word with his hand covering his mouth before addressing the rest of the team, continuing to clap while trying to get them going.

A video of Ronaldo’s action was posted on social media and United fans were quick to praise their new ‘leader’.

“Just being a true professional like always,” one fan wrote. “Leadership qualities and the reason he is the player he is.”

While a further fan commented: “He makes United so much better what player.”

Ronaldo has scored three goals in his first two appearances since returning to Old Trafford from Juventus.