In this famous club’s 130-year history they had never gone 15 consecutive games without defeat in the top-flight until now.

For Howe himself, a personal record as the first English manager to go 15 games unbeaten in the Premier League this century. 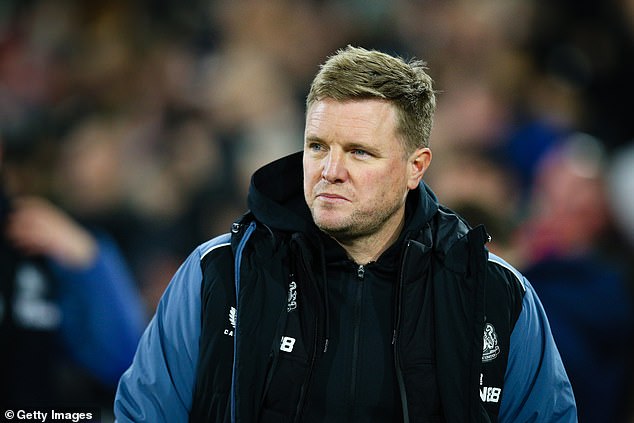 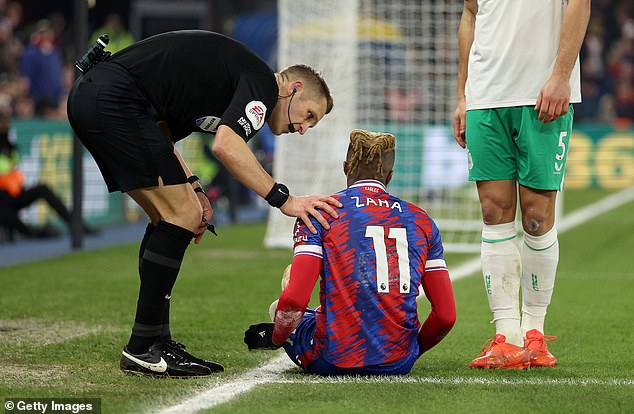 The man who spent 15 months without a job after getting relegated with Bournemouth in 2020, now on the march towards European adventures with Newcastle.

And thus just 15 months after the Saudi takeover, it is the six points that Newcastle are clear from fifth place that is perhaps the number that really matters in this most extraordinary of turnarounds.

It could have been an eight-point gap had they taken their chances and made their dominance count on this bitterly cold evening in South London but in the end, they had Nick Pope to thank after his wonder save from Jean-Philippe Mateta ensured that their unbeaten run went on. 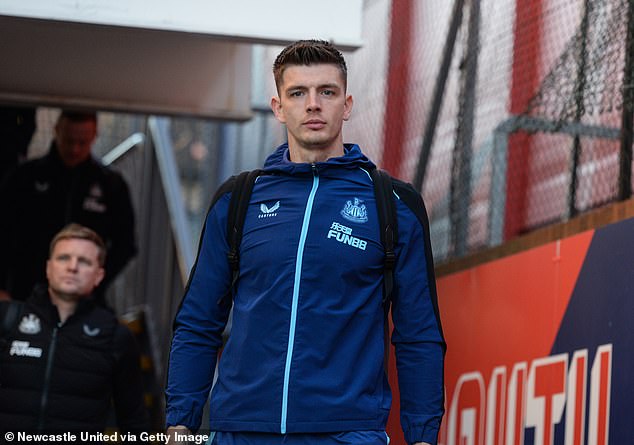 When the Magpies last made this 255-mile trip to Selhurst Park in October 2021, they ended that night in 19th and without a win all season. Just two players – Sean Longstaff and Callum Wilson – remained in the starting eleven from that afternoon. How times have changed.

Patrick Vieira made four changes from the side that drew at Selhurst Park midweek against Manchester United, leaving out the free kick hero from that night in Michael Olise. Despite Olise’s terrific form and his involvement in Palace’s last four Premier League goals, Vieira insisted that after consecutive games against Chelsea and Man Utd, his team needed fresh legs.

Yet it was the selection of Bruno Guimaraes for Newcastle that came as the biggest surprise just six days after he had left St James’ Park on crutches after rolling his ankle against Fulham.

Guimaraes began brimming with confidence, allowed plenty of time and consistently demanding the ball to the regular backdrop of ‘We’ve got Bruno in the middle’ from the visiting support. 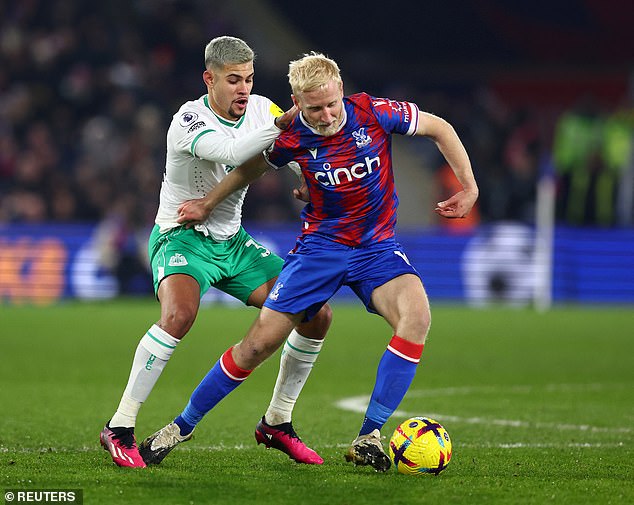 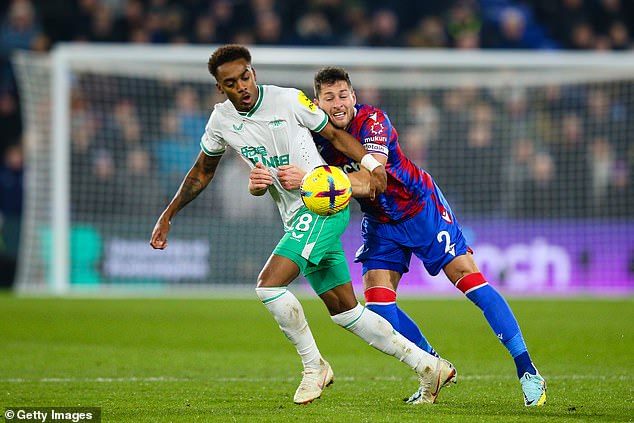 From the outset, Newcastle found joy down their left flank exploiting Joel Ward but failed to make it count.

Five minutes in, Joe Willock broke in behind the Palace backline and chipped an inviting delivery into the path of Miguel Almiron who connected but failed to direct the volley on target as it crashed into the side netting. The away end thought it had gone in.

Sven Botman then found Joelinton, who left Joel Ward with alarming ease but his right-footed strike was straight into the hands of Vicente Guaita.

At the half-hour mark, Marc Guehi was fortunate to avoid a second yellow after his earlier challenge on Botman. The Palace centre-half took out Callum Wilson but he was given the benefit of the doubt by Craig Pawson. 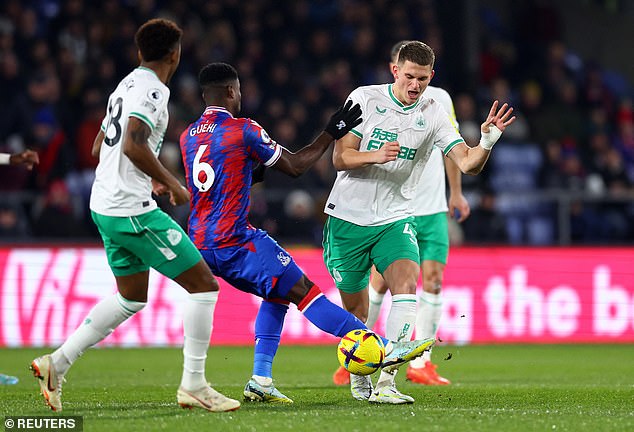 Newcastle persisted with much of the impetus and Joelinton’s strike after a scramble from a corner was kept out by Guaita, following a deflection off Tyrick Mitchell. VAR checked for handball but it would have been extremely harsh if it was given.

Palace had a penalty shout too shortly after but again Pawson made a terrific decision after Zaha fell down following Kieran Trippier’s challenge, having found space in between Botman and Schar.

The game increased in tempo and edge as the half progressed with Jordan Ayew smashing into Botman and Eberechi Eze then catching Almiron.

Palace had a chance of their own on the brink of half time. Eze’s delivery picked out an oncoming Chris Richards who connected sweetly but couldn’t keep his header down. 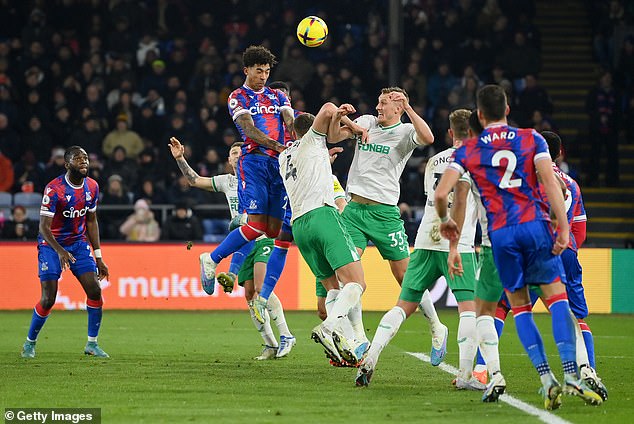 Newcastle haven’t conceded a first-half goal since August but they would have been somewhat disappointed not to be ahead at the break, despite their dominance in possession.

With England manager Gareth Southgate in attendance, Callum Wilson had a golden opportunity to break the deadlock after the interval but his free header from a superb Trippier delivery was straight at Guaita.

Still they hammered at the Palace door with Guimaraes flashing a dangerous delivery across the box and then Botman heading wide from a corner, delivered by Tripper. No player in the league has created more chances from set plays this season than the right-back. 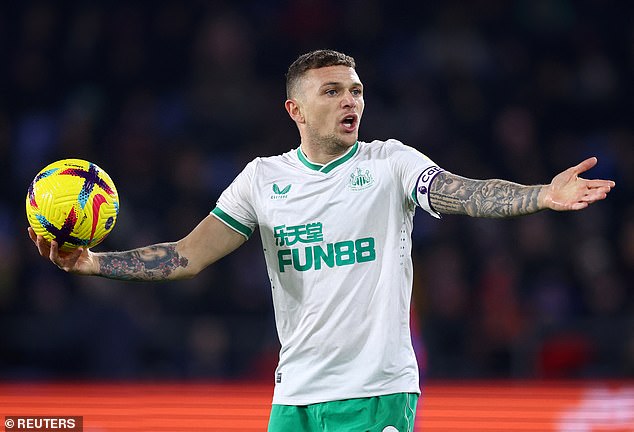 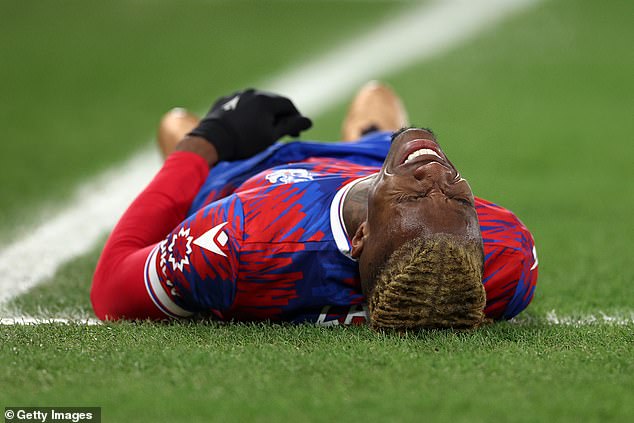 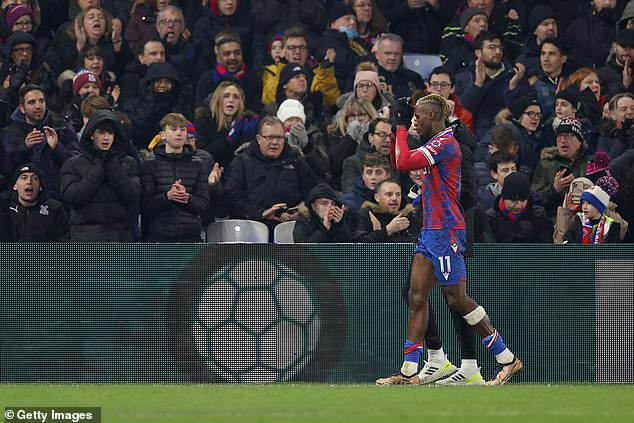 He was forced off the field, with Palace now awaiting news on the severity of the injury

Zaha went down in concerning fashion and Vieira made a triple change in the hope of stopping the one-way traffic, bringing on Olise, Jean-Philippe Mateta and Will Hughes. Hughes in particular helped Palace restore a semblance of control.

Howe responded by putting on the hero of last weekend in Alexander Isak and Allan Saint-Maximin but it was Palace who came closest to breaking the deadlock, only to be denied by a stunning stop from Pope, who was finally called into action in the 73rd minute.

Mateta’s hit was goalbound but Pope pulled out a miraculous hand to tip the ball over the bar on his way to a 12th clean sheet of the season. 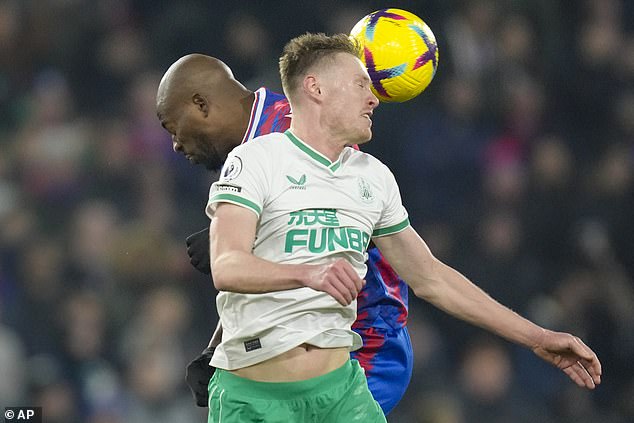 Isak had his moment to take three points again but his header was straight at Guaita and still Newcastle pushed. Their 13th corner of the night was headed wide by Botman and with minutes to go, Saint Maximin’s strike at the back post deflected behind.

In amongst the tension, Vieira handed 17-year-old David Ozoh his debut as he became Palace’s youngest ever Premier League player and the final whistle was celebrated by the Palace faithful.

Another hard-earned point and another reminder that on their day, they can battle with the best this league has to offer. For Newcastle, their dream season rolls on.