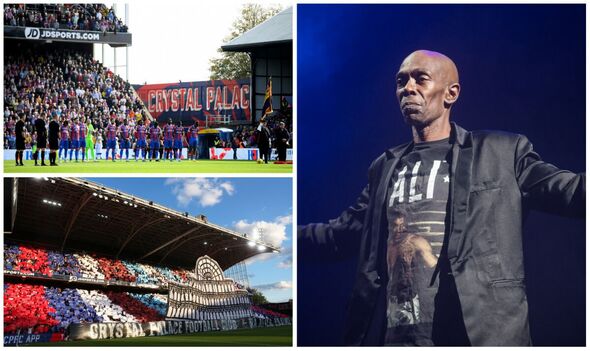 Crystal Palace have announced the club will pay tribute to Faithless singer Maxi Jazz before their Premier League clash against Fulham on Boxing Day following his death on Friday. The band confirmed the 65-year-old passed away in his sleep at his South London home and the club have decided to honour the renowned popstar at Selhurst Park.

Jazz – real name Maxwell Fraser – was a core member of the group alongside Rollo and Sister Bliss. Sister Bliss said he died “peacefully in his sleep” in his south-London home on Friday night.

“Sending love to all of you who shared our musical journey. Look after each other y’hear,” she said on Twitter.

Fraser was a passionate Palace fan and, as a way of recognising his contribution to the club as a lifelong supporter, The Eagles will walk out on Monday afternoon to a Faithless song to commemorate his life.

“We are mourning the loss of legendary musician Maxi Jazz, who has passed away at the age of 65,” a statement released via the club’s official Twitter account read. “The team will walk out to Faithless on Boxing Day in tribute. Our thoughts are with all his family and friends at this sad time.”

Chairman Steve Parish said he was left “desperately sad” after reacting to Jazz’s passing, writing on Twitter: “Desperately sad to hear the news that we lost Maxi this morning.

“He was such a huge talent, a massive supporter of the club in every way and just a wonderful kind hearted man. He made the world dance, sing and laugh and someone I was privileged to call a friend. RIP Maxi.”

Jazz became an associate director for the south London outfit in 2012 and admitted his love for the club surpassed that of the game itself.

“I love Crystal Palace more than I love football,” he told JOE back in 2016 before revealing his favourite player: “I’d like to pick one of the current ones actually because I’m bad with backwards and reverse gear and stuff. So right now, Benteke is my man, him and James McArthur.”

Faithless, a dance band that formed in 1995, were known for singles including We Come 1, which reached top three in the charts in 2001 and dance hit Insomnia, which reached third in 1996.

A statement shared on his Instagram said: “He was a man who changed our lives in so many ways. He gave proper meaning and message to our music.

“He was also a lovely human being with time for everyone and a wisdom that was both profound and accessible. It was an honour and, of course , a true pleasure to work with him. He was a brilliant lyricist, a DJ, a Buddhist, a magnificent stage presence, car lover, endless talker, beautiful person, moral compass and genius.”